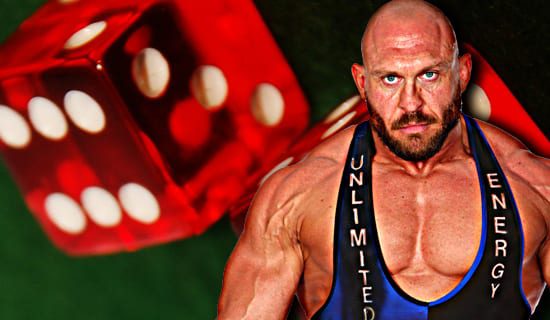 IWC invades the Wheeling Island Casino for the first time ever on Friday Night April 7th, 2017! Our first venture to Wheeling Island will feature several blockbuster match-ups and a special autograph signing with two huge superstars…

“The Big Guy” Ryback and Ricky “The Dragon” Steamboat will be on hand at the Wheeling Island Casino on Friday April 7th for a special pre-show autograph signing at 6:00 PM. Come meet two former WWE Intercontinental Champions and enjoy a night of the best wrestling the tri-state area have to offer!

The IWC World Heavyweight Champion Wardlow will defend his title in Wheeling against Gory! Wardlow may have the height and weight advantage, but Gory is the kind of animal that Wardlow hasn’t faced in IWC before. Plus, Gory’s experience and quickness in the squared circle give him an advantage over the undefeated monster. Will Gory finally capture the only singles title that has eluded him in IWC? Or will Wardlow continue his dominance over IWC?
(Note: If Gory wins the title here, he will defend the title against Rocky Reynolds in Meadville on April 8)

After filing a formal protest for a rematch from Proving Ground, the “Queen of the Silver Screen” Katie Arquette will get a rematch against IWC Women’s Champion Britt Baker! Their match in February proved that, even though Baker squeaked out the victory, Arquette may be a force to be reckoned with in the IWC women’s division. Will the second time be the charm for Arquette? Can Baker hold on to the championship that means everything to her?
(Note: If Arquette wins the title here, she will defend the title against Rachael Ellering in Meadville on April 8)

Shane InYaFace has been medically cleared to return after an assault at SIXTEEN, and will test his luck when he takes on IWC Super Indy Champion Chris LeRusso at Wheeling Island! Will LeRusso be able to escape with another victory over this undefeated MMA fighter? Will Benjamin C. Steele and Bulk Nasty factor into the match yet again on behalf of the “Heir Apparant”?
(Note: If Shane wins the title here, he will defend the title against John McChesney in Meadville on April 8)

Andrew Palace has been on a roll in IWC all through the fall… except when faced with the “Next Trending Topic” Jack Pollock. Pollock seems to have Palace’s number, especially with Team Storm – Jaxon Argos & RC Dupree – by his side. Palace is sick of the thorn in his side and is ready to move on to an opportunity at the IWC World Heavyweight Championship. However, a victory over Palace in January gives Pollock the right to say he deserves a shot before Palace. As a result, the two men agreed to meet in Wheeling to determine who gets the shot at the title! Will Palace finally be able to move on from Pollock? Or will the leader of Team Storm prove he’s better than Palace once and for all?

Former IWC Tag Team Champions Remy Lavey & Keith Haught will be in action on April 7th in Wheeling! Although they’ve been on a bit of a cold streak as of late, the two underdogs are just looking for one big win to get them back into the title hunt. Will that win come on April 7th?

A huge six-man tag team match has been added to High Stakes in Wheeling! Marshall the Bull and his protege “The Country Hammer” Jami Jameson will team with Benjamin C. Steele’s walking crime scene Bulk Nasty! The other trio will see the reunited Sexy Talented Dudes of Chest Flexor, Corey Futuristic, and Corey’s new friend Billy Ruxpin! Will Bulk be able to get along with a man he stood across the ring from in February, Marshall? With the three monsters on the other side of the ring, will the wildcard Ruxpin be a boost to the former tag champs the STDs?

Wheeling’s… favorite son(?) returns! Jaxon Argos and his Team Storm partner RC Dupree will be on hand at Wheeling Island on April 7th! You might know this if you happened to look at Argos’ social media lately. Will he recieve the hero’s welcome he thinks he deserves?