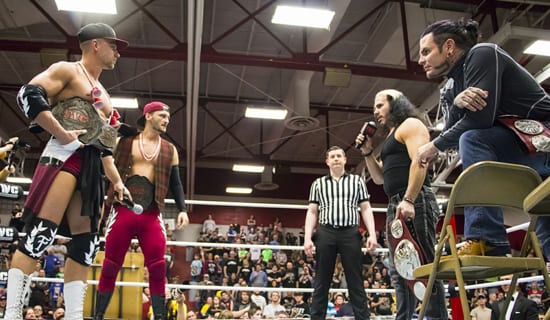 Matt & Jeff Hardy shocked the wrestling world when they appeared live at Wrestlemania 33 in Orlando. They shocked even more when they won the WWE RAW Tag Team Titles! None moreso than us here at IWC. The Hardys were scheduled to take on IWC Tag Team Champions The Fraternity on Saturday night April 8th in Meadville, PA. Fortunately for Channing Decker & Trent Gibson, the Hardys’ WWE deal prevented them from being able to compete in the ring at Night of the Superstars 6. Unfortunately for them, the Hardys were still in the building, were able to choose the stipulation of the match, and brought out the new challengers, the Headless Horsemen! Watch this historic moment as the WWE RAW Tag Team Champions come face to face with the IWC Tag Team Champions!