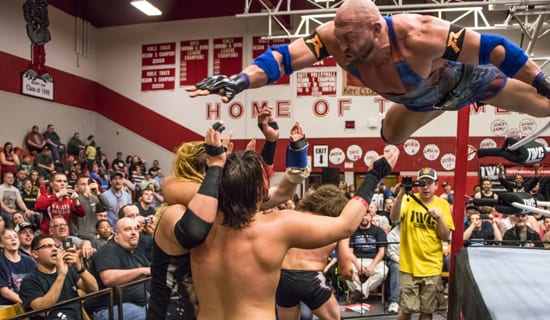 The biggest weekend in IWC history continued this past Saturday in Meadville as we presented Night of the Superstars 6! A crowd of over 1,600 fans gathered to see their favorite IWC Superstars as well as some Superstars and Legends from the past!

in the ring at the same time!

The Fraternity interrupted the entrance of The Hardy Boyz and came to the ring badmouthing the brothers for not being able to wrestle them due to contractual obligations to WWE. Decker and Gibson claimed that Matt and Jeff got cold feet and in reality were just afraid the face them. The Hardy’s assured the obnoxious frat boys that if they were contractually able to do so, The Fraternity would surely be DELET

ED! The Frat continued to taunt the legendary brothers, but would end up eating their words however, as it was announced that due to a stipulation in the contract for their appearance in Meadville, The Hardy’s could choose any tag team in all of space and time to challenge Decker and Gibson for the IWC Tag Team Titles at Night of the Superstars!

Their decision didn’t disappoint. The Hardy’s chose The Headless Horsemen, Gory and Matt Conard, to challenge for the gold and not only that… this match would be a TLC Match! Tables, chairs, garbage cans, and ladders are just a few of the weapons these four men dished out to leave

Meadville as the IWC Tag Team Champions! For nearly a year, Decker and Gibson have reigned atop the tag team division in IWC and on this night, they surely saw their titles slipping away!

The Fraternity finally won the grueling TLC Match after slamming Gory through a table from the top of a ladder, in the process possibly cementing their legacy as the greatest tag team in IWC history! The night wasn’t a total loss for Gory and Conard, however. The Horsemen came up short, but were given a show of respect from The Hardy Boyz after the match and that might be even more important than the victory!

Night of the Superstars is often referred to as the biggest night of the year on the IWC calendar and it’s because of the moments the show creates. One of those moments happened again this weekend as John McChesney defeated Chris LeRusso for the IWC Super Indy Championship!

LeRusso had been sliding his way through title matches ever since winning the championship last October. Thanks to always having manager BC Steele and the 300 pound Bulk Nasty at ringside for his defenses, there hasn’t been any challenger able to successfully beat those odds. Nobody had been able to dethrone “The Heir Apparent” until IWC legend John McChesney stood up to the brash and arrogant champion, challenging him to a title match at Proving Ground back in February for

the following month. Unfortunately, even a legend like “Big League” couldn’t overcome the constant 3-on-1 disadvantage, coming up short in his title opportunity at Sixteen in March.

In Meadville it would be different however. To the disgust of LeRusso, WWE Hall of Famer Ricky “The Dragon” Steamboat was announced as the special guest referee for the Super Indy Championship rematch between the two at Night of the Superstars! Though LeRusso is certainly becoming one of the top Independent Wrestlers around, McChesney is a legend for a reason and he

proved that in a 1-on-1 scenario he could take down LeRusso and end his reign! To the joy of the IWC fans in attendance, that’s exactly what he did!

The worst weekend of their careers continued in Meadville as Team Storm lost a 3-on-2 handicap match to former WWE Superstar Ryback and New Number One Contender Andrew Palace. Ryback had come to the aid of Palace the previous night at High Stakes in Wheeling, WV after Jaxon Argos and RC Dupree joined Jack Pollock in beating down Palace after

their Number One Contender’s Match. A level of retribution for Palace, hopefully after this win he can now look forward to his opportunity at the IWC World Heavyweight Championship!

more than one occasion, but “The Mayor of Brittsburgh” was able to overcome the flurry of offense from Ellering and retain the championship by making her latest challenger tap out!

Wardlow continued his dominance as IWC World Heavyweight Champion at Night of the Superstars, this time successfully defending his title against former two-time NWA Junior Heavyweight Champion Rocky Reynolds. Wardlow has taken out men of all shapes and sizes during his impressive title run, and next up on the list of challengers in new Number One Contender Andrew Palace. How will the 2016 IWC Superstar of the

Year match up to “The Man with War in his Name?!”

In other action, an entertaining battle for microphone supremacy saw Mr. Anderson defeat RJ City and in a huge Eight Man Tag Team Match the team of Chest Flexor, Lumberjack Leroux, Remy Lavey and Keith Haught picked up a victory over Marshall “The Bull” Gambino, Jami Jamison and The Mega Plowers!

Next up on the IWC calendar is Clearfield Carnage 2 on April 29th in Clearfield, PA. Keep checking back here at IWCwrestling.com as well as on Facebook and Twitter for the latest updates along with news on future upcoming events!