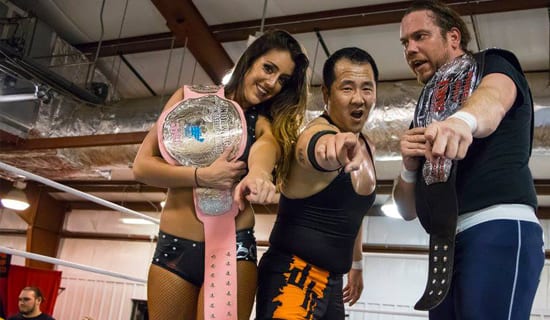 IWC returned to Clearfield this past weekend and the fans were treated to a night full of action! Championship matches, a record-breaking celebration, a Clearfield Street Fight… it’s an event we like to call Clearfield Carnage!

The main event certainly lived up to the name of the show as “Big League” John McChesney and Dan Hooven defeated Chris LeRusso and Bulk Nasty in a Clearfield Street Fight! Originally, LeRusso and Bulk got themselves disqualified, but IWC Owner Justin Plummer took to the microphone and restarted the match under Street Fight rules. If you think about it, Plummer might have unintentionally been doing these two a favor! LeRusso had been waiting to get revenge on McChesney ever since he was defeated by the IWC legend for the IWC Super Indy Championship last month at Night of the Superstars 6. Bulk Nasty also had a vested interest in this match as former IWC Photographer Dan Hooven has been calling him out on Social Media for months.

You have to admire the guts of Hooven, but it was time for him to put up or shut up at Clearfield Carnage as he’d now actually be in the ring with the 300 pound “Human Crime Scene.” To the delight of the IWC fans, Hooven stuck to his word and wasn’t intimidated by the big man, even at

one point hitting a huge splash putting Bulk through a table on the outside of the ring!

IWC Women’s Champion, Britt Baker, made her presence felt in the main event as well, coming to the ring with Kendo Sticks and taking turns with McChesney whaling on the torso and back of Bulk Nasty as the fans at ringside counted along! Earlier in the night LeRusso had made some disparaging remarks towards Baker and this was her form of payback!

McChesney and Hooven’s victory allowed the fans to leave happy and following the pinfall, Baker joined the two in the ring to help celebrate during the aftermath! This isn’t the end of this saga, however. Next month at Aftershock, LeRusso gets his rematch with McChesney for the

Wardlow again proved his dominance as he retained the IWC World Heavyweight Championship in a hard hitting match with Matt Conard. “The Reaper” came to Clearfield ready to fight, but as most of Wardlow’s challengers, Conard was outmatched, outsized and ultimately defeated.

“The Man with War in his Name” won’t have much time to enjoy his successful defense, however. At IWC Aftershock Wardlow will defend his championship against the two-time IWC Superstar of the Year, Andrew Palace! Will we finally see Wardlow’s first loss in an IWC ring? If so we’ll also see a new World Heavyweight Champion on May 13th!

Clearfield Carnage was also the event where The Fraternity planned a celebration the likes of which we have never seen before as they recently became the longest reigning Tag Team Champions in IWC history. They even hired the services of my broadcast colleague Dave Kich to personally introduce them to the ring, complete with sunglasses, gold chains, a backwards hat and beer!

Whatever the plan may have been, Kich wasn’t ever able to officially pledge The Frat as “Big Time” Bill Collier and “The Playboy” Jon Atlas interrupted the party and challenged The Frat to a Tag Team Title Match later in the night! Decker and Gibson denied the challenge, claiming they came to Clearfield to celebrate, not to fight. Before they could make it through the curtain however, IWC owner Justin Plummer ordered the obnoxious Tag Team Champions to get back in the ring and defend the titles right then and there!

Whatever the plan may have been, Kich wasn’t ever able to officially pledge The Frat as “Big Time” Bill Collier and “The Playboy” Jon Atlas interrupted the party and challenged The Frat to a Tag Team Title Match later in the night! Decker and Gibson denied the challenge, claiming they came to Clearfield to celebrate, not to fight. Before they could make it through the curtain however, IWC owner Justin Plummer ordered the obnoxious Tag Team Champions to get back in the ring and defend the titles right then and there!

The action spilled into the crowd early as the champions tried on numerous occasions to escape the building with their titles intact. When the match finally did get started in the ring, the referee lost control quickly and was easily distracted over and over as The Fraternity would use every trick in the book to pick up the win and continue their record-breaking reign as IWC Tag Team Champions.

Who’s next to challenge Decker and Gibson? We’ll find out on May 13th. Let’s just hope there isn’t another celebration planned…

Andrew Palace has been riding a wave of momentum since late last year, culminating with defeating Jack Pollock last month at High Stakes to become Number One Contender for the IWC World Heavyweight Championship. At Clearfield Carnage however, Palace would have to put his championship aspirations on hold as he would face the impressive newcomer, Jami Jamison.

Jamison has opened a lot of eyes since his debut at Proving Ground in February, but Palace is more focused than ever, ignoring the intimidating

size of Jamison and pinning him for the three count after the Hernia Driver! As we’ve seen in the past, Andrew Palace has more heart than perhaps anyone in the entire IWC locker room. Palace is determined to prove he is the top guy in IWC and won’t stop until he finally becomes World Heavyweight Champion. He’ll get his shot on May 13th!

Team Storm picked up another win as a cohesive unit, defeating Chest Flexor, Remy LaVey and Keith Haught in a Six-Man-Tag-Team Match. Pollock, Argos and Dupree continue to compaign for main event spots in IWC and Jack Pollock is still convinced he should be the Number One Contender, not Andrew Palace! It’s still early in 2017 and if Palace is able to dethrone Wardlow next month at Aftershock, Pollock could in fact be first in line.

Next up on the IWC calendar is Aftershock on May 13th when we return to the Court Time Sports Center in Elisabeth, Pa. Already announced is the first ever one-on-one meeting between Bulk Nasty and Dan Hooven, Britt Baker defending her IWC Women’s Championship against the returning Chelsea Green and the huge World Heavyweight Title Match with Andrew Palace challenging Wardlow! Keep checking back here at IWCwrestling.com, as well as on Facebook and Twitter for more upcoming announcements!