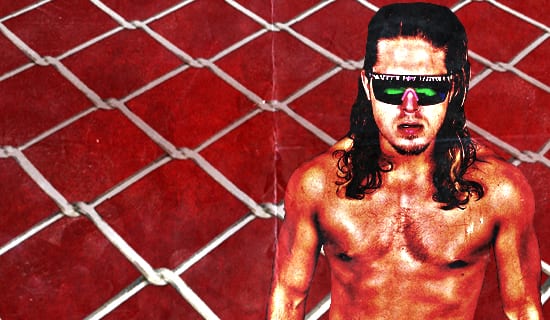 IWC’s huge summer comes to a close with our annual CAGED FURY live event on Saturday night August 19th, 2017! We return to our home base of Court Time Sports Center in Elizabeth, PA at 7:00 PM. In addition to the four matches we previously announced, we also have 3 more added to the lineup!

IWC Super Indy Champion “Big League” John McChesney unfortunately suffered a shoulder injury when he won the title from Adam Cole at Threat Level Midnight. As a result, there will now be a four-way to determine a new Super Indy Champion! Gory, “Bad Boy” Joey Janela, Anthony Henry, and “Suge D” Sugar Dunkerton will compete for the prize. Gory is a former champion who has been on the cusp of the Super Indy Title, but never had a proper reign with the championship. Janela fared well in Super Indy 16 this year, falling to eventual winner Cole in the semi-final round. Henry shocked IWC by entering a #1 contenders four-way in July against Super Indy 15 & 16 finalist Jonathan Gresham, former Super Indy Champion Chris LeRusso, and the only triple crown winner in IWC history DJZ to earn a shot at the championship. Suge D competed in Super Indy 14 and 15, impressing IWC officials and fans alike, but hasn’t been able to capture the big prize. Which man will walk away with the Super Indy Championship this Saturday night??

Another IWC rivalry will be settled inside a 15-foot-high steel cage on Saturday night as Bulk Nasty battles the thorn in his side, IWC-photographer-turned-wrestler Dan Hooven. Hooven has been able to get a few wins over Bulk, which Bulk’s manager Benjamin C. Steele called “flukes.” Every time he got the win over Bulk, Hooven escaped out the door, sometimes into the waiting vehicle of his friend Santana Diamonds to escape any further harm from the “Walking Crime Scene.” But, Steele had a solution to that: nowhere to run, nowhere to hide, Hooven vs Bulk inside a steel cage. Will Hooven be able to walk away from being inside the steel cage with the giant 300lb. monster?

A huge three-way tag team match has been signed as Jami Jameson & Marshall Gambino, The Mega Plowers, and The Sexy Talented Dudes will square off August 19th! All three teams saw their matches end in shenanigans at Threat Level Midnight. Marshall and his protege Jameson, as well as the STDs, were attacked by Officer Dan Murphy, who promises to bring Law & Order to IWC alongside his partner “The Gavel” David Lawless, Esq. The Mega Plowers weren’t in full force at TLM, as Magnum CK was attacked backstage prior to the event by a masked duo, conveniently leaving Jock Samson alone to take on Team Storm. CK’s stand-in, Shane InYaFace, didn’t impress Jock, who left the MMA star alone in the ring following their loss. With the IWC tag team scene in flux with the dominant Frat on top of the universe, which team will step up to prove themselves worthy contenders to the crown?