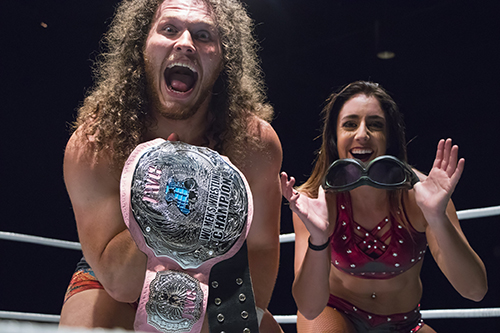 IWC returned to the Wheeling Island Casino in Wheeling, West Virginia this past weekend as we presented High Stakes 2! The night was centered on the Birthday celebration of the 2016 Rookie of the Year, Jaxon Argos and as you can expect, things got ridiculous 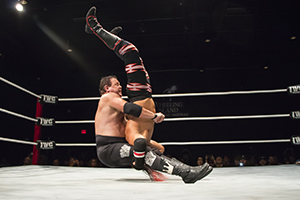 Argos, along with Team Storm partners Jack Pollock and RC Dupree, appeared on stage and began to run down the city of Wheeling. Argos demanded the crowd sing Happy Birthday to him and at one point even made me put a crown on his head!

Thankfully, familiar music began to play and out came WWE Hall of Famer, Jerry “The King” Lawler to crash the party! Lawler reminded Argos that he’s the real king of Professional Wrestling and proceeded to smash Jaxon’s face into his own Birthday cake! This led to a one-on-one match between the two later in the show, which saw Lawler defeat Argos with 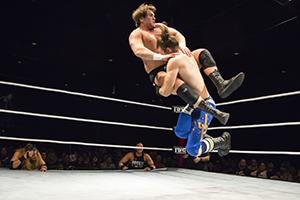 It wasn’t a complete embarrassment of a night for Team Storm however, as Jack Pollock was able to defeat Darin Dinero thanks to multiple shenanigans from RC and Argos on the outside of the ring. You have to think these two will meet one on one again and if Argos and Dupree aren’t at ringside, there may be a different outcome! 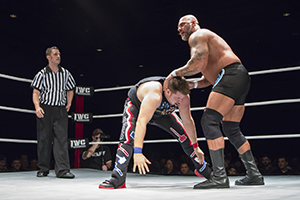 High Stakes 2 also saw the return of the IWC High Stakes Championship, a title that hadn’t been defended since 2002. IWC Owner Justin Plummer came to the ring with the new Championship belt and announced a 5-Man Scramble later in the show to crown a new champion! 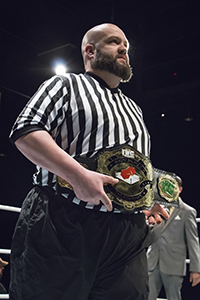 Jami Jamison had already qualified for the title match earlier in October at Unbreakable, but Plummer announced that the other four participants would be the winners of an impromptu, Wildcard 8-Man Tag Team Match happening right then and there! The match saw Jimmy Vegas, Bulk Nasty, Nathan Aldridge and Marshall Gambino defeat Lawless & Order and Chest Flexor and Billy Ruxpin of The STD’s.

Vegas’ team would advance to the High Stakes Championship match later in the show and it turned out to be a wild one to say the least! Jamison was busted open with a barbed-wire covered 2×4 and eventually Powerbombed through a table by Bulk Nasty! Chaos ensued throughout the ringside area and just before the referee lost complete control, Jimmy Vegas was able to pick up a three count and become the new champion!

The title was presented to him personally by the Special Guest Referee, the last IWC High Stakes Champion Boomer Payne, and based on the reaction from the crowd, the respect for Vegas extends from our locker room to the IWC fans! The list of names gunning for a shot at the High Stakes Championship was pretty long before this match, but I sense it becoming much shorter now that Vegas holds the title… 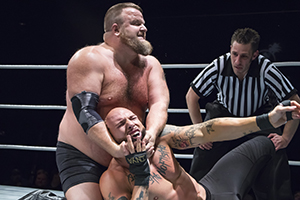 Nothing was settled in the rivalry between Shane InYaFace and Jock Samson at High Stakes 2. The two have been at each other’s throats ever since Jock turned on Shane in a Tag Team Match back in August and High Stakes 2 was set to be the stage for the two to write the final chapter in their story. It wouldn’t be however, as the match never officially started. 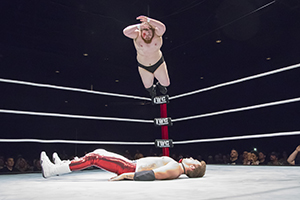 Jock attacked Shane with his signature cowbell and continually ignored the referee’s warnings to stop, most likely resulting in a hefty fine. The common fan would say Jock is afraid to face Shane one-on-one, but longtime fans of Jock Samson know better. My guess is the veteran has something else up his sleeve.

Keith Haught picked up a big singles win over the debuting Mambo Italiano! A successful homecoming for The Bearcat, however at times it certainly seemed as if Mambo was moments away from scoring the upset victory over the former multiple time IWC Tag Team Champion. Perhaps Haught’s mind is too preoccupied on his missing Tag Team partner, Remy LaVey… 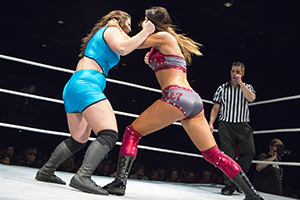 In other action, Andrew Palace and IWC Women’s Champion Britt Baker teamed up for the first time since 2015 to defeat Hollywood Couture and Gory successfully defended the IWC Super Indy Championship against Chris LeRusso, forcing “The Heir Apparent” to tap out in the center of the ring!

Next up on the IWC calendar is Clearfield Carnage 3 this Saturday night, and then we close out the year with Winner Takes all on December 9th. Who will step up as the year closes out and gain momentum heading into 2018? Keep checking back here at IWCwrestling.com and on Facebook/Twitter for the last updates!