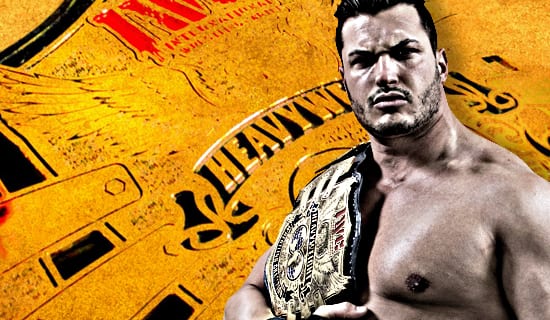 IWC closes out one of our biggest and most eventful years ever on Saturday night December 12th! Winner Takes All 2017 eminates from our home base of Court Time Sports Center in Elizabeth, PA, with a belltime of 7:00 PM. Several matches have already been announced on social media, so let’s break them down here!

Last year at IWC Winner Takes All, “The Man With WAR In His Name” turned IWC upside down when Wardlow captured the IWC World Heavyweight Championship in an unnanounced match against RJ City. Since then, he has not showed any sign of slowing down, going undefeated since his day one in IWC… including a dominant victory over Andrew Palace in May. Palace was attacked by Team Storm before the bell, and insisted on still stepping up to the plate, but he fell short that night. Now, Palace has Team Storm in his rear view, and he steps up to the plate to challenge Wardlow for the gold once again! Can Palace and his frenetic energy slay the beast to become the face of IWC, or will Wardlow add another name to his growing list of victims in the IWC record books?

On December 9th, The Fraternity will get their chance for revenge against the team that ended their record breaking championship streak! It’s The Fraternity vs. Locked and Loaded for the IWC Tag Team Titles in a Frat House Brawl! Will the brash brothers return to glory in a match that gives them home team advantage? Or will Locked and Loaded continue to be the “Mane Event” of the IWC Tag Team Division?!

Four of the best women in IWC will battle for the gold when the IWC Women’s Championship is on the line at 2017 Winner Takes All! Britt Baker recaptured the title in a surprise appearance at Unbreakable, unseating Lufisto in a three-way match with Ray Lyn. But, during the match, Katie Arquette’s “co-star” Calvin Couture hit the ring and tried to take Lufisto out with the belt, but hit Ray Lyn instead. Lufisto chased Couture from the ring while Baker took advantage and got the pin on Ray Lyn! How different would the IWC Women’s Title picture be if Couture hadn’t interfered on Arquette’s behalf? Will Britt Baker be able to retain her gold against all odds, or will there be a new Queen leaving that night?

The IWC Super Indy Championship will be on the line at IWC Winner Takes All in a three way dance! “The New Age Plague” Gory will defend the title against “DiamondTiger” Kobe Durst and Anthony Bennett! Durst has been tearing it up north of the border in Canadian independent promotions C*4 and Alpha-1. Durst has been collecting gold, winning the Alpha-1 Alpha Male Championship way back in September 2016, and holding both the C*4 Championship and C*4 Underground Championship. You may remember the “hightop fading, hiphop parading” Anthony Bennett from his starmaking performance in the WWE Cruiserweight Classic. Since then, he has competed for his home promotion, Monster Factory Pro Wrestling, as well as CZW DojoWars, and even in the legendary ECWA Super 8 Tournament. Which of these 3 men will walk away with the IWC Super Indy Championship on Decmeber 9th?

One year ago, Team Storm kicked down the door to the IWC. Throughout the year, they made a major impact by any means necessary. But on December 9th, that may all come to an end as the contracts of JaXon Argos & RC Dupree are set to expire at midnight. However, they have been offered big money, long-term deals… IF Argos can beat his nemesis, Jonathan Gresham one-on-one! Will Argos and Dupree capture their white whale? Or will Jonathan Gresham get sweet revenge on his Canadian rivals?!

“The One Man Riot” Jimmy Vega$ is ANGRY after losing the IWC High Stakes Championship, and will be taking on the man that cost him the IWC World Championship, Dylan Bostic, on December 9th at IWC Winner Takes All! Will the Justin Bieber of professional wrestling pickup a huge win, or will arguably the most dangerous man in IWC history deal out a dose of violence?

Magnum CK turned his back on Shane InYaFace last month at IWC Unbreakable, and on December 9th at IWC Winner Takes All, the undefeated MMA fighter is out for revenge as Shane InYaFace takes on Magnum CK in a Grudge Match!

One year ago, “The Greatest Thing To Happen To Pro Wrestling Since Pro Wrestling Happened,” “The Next Trending Topic” Jack Pollock made his shocking IWC debut at last year’s Winner Takes All. This year, he will take on “Elizabeth’s A1,” “The Man With The Golden Hips,” “The Tinder Terrorist” Darin Dinero on December 9th. Can the leader of Team Storm celebrate his one year anniversary with a victory or will Darin Dinero stand tall in his hometown?

All this, plus at least one more match to be announced! Stay tuned!