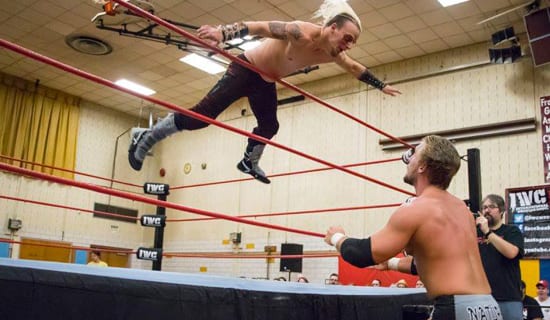 IWC kicked off a potentially explosive 2018 with our return to Rural Valley, PA. January 20th saw IWC witness the Fallout from December’s Winner Takes All.

Fallout saw the very first defense of the IWC World Heavyweight Championship by Andrew Palace. In his first defense, he met a familiar foe in the form of Dylan Bostic! “Swaggy D” was a thorn in Palace’s side for nearly a year, even cutting off a lock of Palace’s hair when the two feuded over the Super Indy Championship. On this cold January nigh

t, the hottest feud of 2015 was revisited for the biggest prize in IWC. Bostic was obviously willing to pull out all the stops to unseat Palace, even recruiting the likes of Calvin Couture, Mambo Italiano, Chris LeRusso, and Bulk Nasty. But no matter how many shots they took at the “Spazmanian Devil”, Palace refused to stay down. He worked hard for the championship, and he wasn’t going to relinquish it that easily. With both referees out, a chair in the middle of the ring, and the four assailants distracted, Palace planted Bostic with a piledriver to finally put him down for the 3 count and his first successful defense. With everybody gunning for Palace, what’s next for the champ?

Marshall “The Bull” Gambino has the reputation in IWC for being ruthless and cutthroat,

willing to do whatever it takes to get what he wants. This was proven at Fallout when the former 5-time IWC Tag Team Champion took out not only his former protege Chest Flexor, but also hs current protege Jami Jameson. Gambino, Jameson, Flexor, Corey Futuristic, Officer Dan Murphy, and “The Gavel” David Lawless went all out to try and earn a shot at Bulk Nasty’s High Stakes Title. Some of the ridiculous and crazy things seen in the match include Gambino swinging a chair like a baseball bat and opening up a gusher on the back of Lawless’ head, Jameson throwing Officer Dan over his head off the apron through a table on the floor with a Death Valley Driver, Jameson powerbombing Futuristic through a table, Gambino throwing Jameson off the top to the floor through a table, and Flexor stacking two tables on the floor, only to be splashed through them by Marshall for the win. Will the cold-blooded Gambino see his first singles championship in IWC in 2018?

Redd hit the ring and threw Ganon Jones, Jr. off the top through a table on the floor. The Fraternity regained the titles,, then Redd & PB Smooth hit the ring to finish off Duke Davis. The “Litty Lions” looked for revenge at Fallout against Redd & Smooth, but were only able to get a victory by technicality. When it looked like Davis & Jones, Jr. were about to finish the newcomers, Redd introduced a chair into the match and attacked Locked & LOaded with it, drawing the disqualification. After the bout, Locked & Loaded decided after Redd & Smooth used a table and chairs, there was only one more logical step… a TLC Match at Reloaded 4.0 on February 17th!

IWC Super Indy Champion Gory has been on an unbelievable roll since winning the title last August. “The New Ag

e Plague” has been able to retain his championship against the likes of Ophidian, Rayo, Kobe Durst, and former champion Chris LeRusso. Rolling into 2018, Gory is looking to do more of the same, but first in his way was “The Natural” Ethan Wright. Wright is a student of former NWA World Heavyweight Champion Harley Race and is a throwback in the squared circle. He looked to slow down the quicker Gory, but just like the others, Wright fell to Gory. How will Gory continue to fare going into Reloaded 4.0, defending his title in a 4-way against opponents all chosen by the infamous Reset Button?

High Stakes Champion Bulk Nasty has put out a challenge to all comers, even defending the title in a battle royal at Winner Take

s All. “Bulk Vs. Everybody” continued at Fallout when he defended the title against “The Reaper” Matt Conard. The High Stakes Champion chooses the stipuation for their title defense, and Bulk chose a Falls Count Anywhere Match. The two men used the stipulation to their advantage, even going out into the cold and snowy streets of Rural Valley, with Conard getting slammed on the hood of a car! When they finally made their way in, Bulk was able to powerbomb Conard into the corner post to get the pinfall on the floor and retain his title again. What kind of competiton will step up against Bulk thanks to the Reset Button at Reloaded on February 17th?

Jaxon Argos somehow was able to win IWC’s Rookie of the Year award for the second time in a row thanks to a technicality (the second half of his rookie year took place in 2017) and some possible ballot-stuffing. Someone

who took offense to that was the first runner-up to the 2017 Rookie of the Year, Dan Hooven. Hooven joined with Darin Dinero to take on Argos and his Team Storm partner RC Dupree. Dinero chased RC to the back at one point for trying to introduce a chair into the mix, which left Hooven alone with Argos. A shot with the Canadian flag, and a half-crab later, and Argos got the win. But he wasn’t finished, he threatened to break Hooven’s leg in the chair if IWC owner Justin Plummer didn’t congratulate him on his win. Instead, Plummer brought out several other rookies that Argos stole the win from, including Billy Ruxpin, Jami Jameson, Jinx, and Jason Tyler. The rookies all took their turns hitting Argos with their best shots, leaving him laying and celebrating their own victory.

In six-person tag team action, Katie Arquette & Calvin Couture teamed up with their recent BFF, Mambo Italiano, to take on “Bearcat” Keith Haught, “Five-Alarm Fire” Jason Tyler, and “Bloody Adorable” Jinx. It seemed like the devious trio was going to pull out the victory, but Tyler & Haught launched Jinx off the top rope onto Couture to give her team a huge victory!

Jock Samson and Shane InYaFace have been on a collision course as of late. Ever since Jock and his tag partner Magnum CK pulled the wool over the eyes of Shane and his girlfriend Ellie Fredericks, the two men have been destined for battle. They finally met one-on-one at Fallout, but the result wasn’t exactly what Shane was looking for. After drawing Ellie into the ring and forcing a kiss on her, Jock used the distraction to hit Shane with his cowbell and get the win. Shane has promised he isn’t finished with Jock yet!

mission. LeRusso announced he has taken a $25,000 bounty out on the head of “Titan” Dennis Jackson! LeRusso has had his problems with Titan ever since Jackson’s debut back in August. Will someone step up and be able to collect on LeRusso’s bounty?

IWC returns to our home base of Court Time Sports Center on Saturday night February 17th with Reloaded 4.0 and the return of the infamous Reset Button. With all titles up for grabs against randomly-chosen opponents, be sure to join us in Elizabeth for a night full of surprises and special guests!