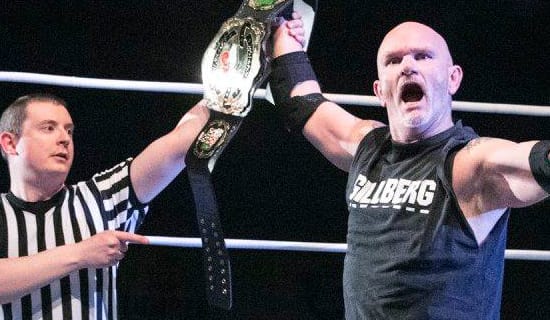 It’s often been called the most unpredictable and exciting night of the year. It was the return of the Reset Button as IWC presented Reloaded 4.0 at the Court Time Sports Center in Elizabeth, PA!

In the opening contest, Shane InYaFace defeated Jock Samson. The two men have had their differences as of late, and Shane was finally able to get the duke on Jock. Ellie Fredricks got her own measure of revenge on Jock with a well placed slap to the face. Fed up and embarrassed, Samson grabbed a microphone and publicly quit the company following the loss.

You never know what will happen when IWC hits the Reset Button! The first shocking selection by the Reset Button this year was former WWF Light Heavyweight Champion Gillberg! Flanked by the Sexy Talented Dudes, Gillberg took on the IWC High Stakes Champon Bulk Nasty. It all seemed doomed for Gillberg early on, but thanks to a distraction from Jimmy Vegas, Gillberg pulled off a huge upset, defeating Bulk for the High Stakes Championship! Following the contest, James Ellsworth appeared on the big screen

and challenged Gillberg to a title match at Seventeen on March 17th!

In the second Reset Button selection of the night, Shotzi Blackheart was chosen to challenge Britt Baker for the IWC Women’s Championship. This was a fantastic back-and-forth contest, but Baker’s reign would continue however, as she forced Blackheart to tap out!

With originally scheduled opponent Jonathan Gresham out with an injury, Jaxon Argos still demanded an opponent. IWC Owner Justin Plummer obliged, declaring that the two-time Rookie of the Year’s opponent would be chosen by the Reset Button! The plan backfired on Plummer as Jinx was chosen by the Reset Button and ultimately humiliated by Argos in what was an uncomfortable scene to watch. Argos was obviously sending a message to the Octopus, locking Jinx in a half-crab and refusing to let go.

In another exiting Reset Button selection, ECW’s “Hardcore Icon” The Sandman was chosen to team with Darin Dinero to challenge The Fraternity for the IWC Tag Team Titles. Sandman was in rare form at Reloaded 4.0, even using submissions, hiptosses, and armdrags on The Frat! However, the new team came up short against the longest reigning Tag Team Champions in IWC history, but it was a memorable moment for the Court Time fans in attendance!

“The Titan” Dennis Jackson, Dan Hooven and Jami Jamison defeated Chris LeRusso, Calvin Couture, Mambo Italiano, “The Gavel” David Lawless, Esq. and Officer Dan Murphy in a 3-on-5 Handicap Match. Despite the odds against them, Team Titan was able to overcome the mismatch after LeRusso walked out on his team, leaving Calvin Couture to take Titan’s devestating finisher. As a result, the $25,000 bounty put on the head of Jackson by Chris LeRusso is still open for the taking, but is LeRusso afraid to do his own dirty work?

After months of searching, Keith Haught was finally able to get his partner Remy Lavey to appear at Reloaded 4.0 and explain his disappearance from IWC. After teasing a reunion with his former Tag Team Champion partner Haught, Remy stabbed his former best friend in the back, aligning with the mysterious and dangerous Cogar Brothers to form what is now known as The Culmination. This is a side of Remy Lavey we haven’t seen in IWC before. Why would he turn his back on Haught? And why would he bring the Cogars to IWC?

Locked & Loaded defeated The Upper Echelon in an exciting TLC Match! These two teams have been gunning for a top spot in the tag team division, with the war between them escalating at every turn. After taking the giant PB Smooth out of the equation, Duke Davis & Ganon Jones, Jr. were able to finish Colby Redd, planting him through a ladder with a huge spinebuster/dropkick combo. This bout surely brought the war between the two teams to an end and put Locked & Loaded one step closer to regaining their tag team championships!

In perhaps the most surprising Reset Button selection of the evening, referee CJ Sensation was chosen to challenge Gory for the IWC Super Indy Championship! The match would be a Fatal 4-Way Elimination Match featuring other Reset Button selections, the returning “Neon Ninja” Façade and Rayo! Sensation seemingly hasn’t lost a step since hanging up the boots, even coming within inches of eliminating some of the other competitors, and executing a breathtaking dive over the top rope to the floor! Eventually, former tag team championship partners in Flippin’ Ain’t Easy, Gory and Facade emerged as the final two men in the match, but it was Gory who would get

the win, continuing his impressive reign as Super Indy Champion!

In the main event, Dylan Bostic was chosen by the Reset Button to challenge Andrew Palace for the IWC World Heavyweight Championship! However, before the match could get started, Justin LaBar appeared at ringside and talked Palace and Justin Plummer into adding Wardlow to the match to make it a Triple Threat! A miscommunication between Wardlow and LaBar led to Palace picking up a pinfall victory, retaining the championship in the process! Wardlow was not happy with LaBar as he walked off, leaving his manager in the ring confused as Reloaded came to a close!