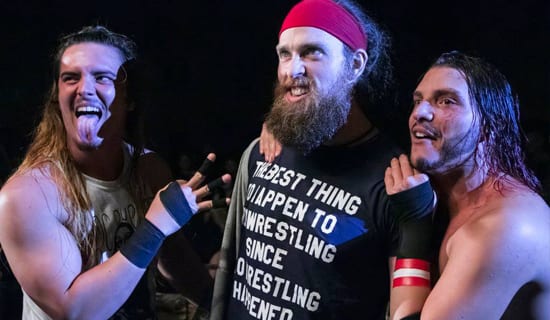 The International Wrestling Cartel continues its reign as the biggest and best promotion in the area as we presented Seventeen years of IWC at the Court Time Sports Center in Elizabeth, PA!

In the opening contest, “The Titan” Dennis Jackson teamed with Jami Jamison and Shane InYaFace to defeat the team of Magnum CK, Utamaro and Pretty Boy Smooth in a six-man Tag Team Match. The $25, 000 bounty placed on the head of Jackson by Chris LeRusso is still open for the taking!

James Ellsworth shocked the world and defeated Gillberg to become the NEW IWC High Stakes Champion, much to the dismay of the live crowd! In a wild turn of events, following the contest Marshall “The Bull” Gambino (who was hired by Ellsworth to be security against Gillberg’s entourage of the Sexy Talented Dudes) cashed in his opportunity for the High Stakes Title he earned back at Fallout in January! Gambino attacked the knee of Ellsworth and hit him with the title belt before pinning him to win his first singles championship in his long IWC career!

Two-time IWC Rookie of the Year Jaxon Argos pulled off what many are calling the biggest upset in recent memory, defeating Ring of Honor star Jonathan Gresham in a Submission Match! With Team Storm partner RC Dupree at ringside, Argos was able to gain an unfair advantage and weaken the leg of Gresham. Gresham put up a valiant fight, but Argos was ruthless, repeatedly attacking Gresham’s knee with a steel chair before locking in the Canadian Crab to get the win. Gresham will have his opportunity for revenge however, as the two are scheduled to meet in the opening round of this year’s Super Indy tournament! More on that later…

Gory continued his impressive reign as IWC Super Indy Champion, defeating his longtime rival and former tag team partner DJZ in what is sure to be a Match of the Year candidate! The last time these two men met in an IWC ring was 10 years ago, but the two still know each other very well, even breaking out some moves that haven’t been seen from either man in years. Gory’s next title defense will come at Night of the Superstars 7 in Meadville, PA on April 14th against Ophidian!

Mambo Italiano made his way to the ring and began to dance and sing, proclaiming to be better than Elias, Jeff Jarrett and even The Honky Tonk Man! To the surprise of the Court Time fans, The Honky Tonk Man actually appeared in the entrance way, guitar in hand, prepared to upstage Mambo! The fiery Italian took offense to this and tried to attack HTM, but a quick Shake, Rattle, & Roll put Mambo on his back! The self-proclaimed “Greatest Intercontinental Champion of All Time” serenaded the crowd to his theme song to send Mambo packing!

In one of the most uncomfortable scenes of the night, IWC owner Justin Plummer was forced to reinstate recently fired Superstar Jack Pollock after Team Storm members Argos and Dupree led Plummer out of the ring, distracting him long enough for Plummer’s wife Jenny to be left alone. Pollock appeared at ringside and held Jenny hostage, even putting a bag over her head, while Argos forced Plummer to sign a new contract, with the provision that Argos will be inserted into Super Indy 17! Incensed, Plummer promised to make Team Storm’s lives a living hell. Argos’ first round Super Indy opponent will be Jonathan Gresham, while Pollock will be forced to take on former World Heavyweight Champion Jack Swagger at Night of the Superstars 7!

With Laurel Van Ness unable to appear at Seventeen, Britt Baker was without a challenger for her IWC Women’s Championship. This led to Katie Arquette demanding to be put in the match instead, to which Baker obliged! Originally it was announced that Arquette had won the title, however another referee reversed the decision and awarded the title back to Baker after acknowledging Arquette’s use of a steel chair to pick up the three count! The anticipated match between Baker and Van Ness will happen at Night of the Superstars 7, but where does Arquette stand in all this? She got a visual pin over the Women’s Champion… will there be a rematch in her near future?

avey via disqualification. Haught refused to strike his former tag team championship partner, giving Remy every chance to repent and rekindle their friendship. Lavey used Haught’s kindness against him, with The Cogar Brothers at ringside interjecting themselves at every turn. Finally, Haught couldn’t take it anymore and kicked Lavey in the side of the head, but couldn’t capitalize and tried to even apologize to Lavey. Remy showed no mercy, repeatedly punching Haught, and finally the referee disqualified Lavey for ignoring his five count and warnings for using a closed fist, doing more and more damage to The Bearcat with every blow. Lavey and The Cogar Brothers continued to pummel Haught in the ring until Dan Hooven and Jason Tyler made the save. This issue is certainly not over, but will Haught ever be able to fight back against his former friend?

CMLL Superstar and hometown hero “El Rudo de las Chicas” Sam Adonis returned to IWC, teaming with Jimmy Vega$ to take on Vega$’ nemesis Bulk Nasty and “The Heir Apparent” Chris LeRusso in an exciting Tag Team Match! Despite Vega$ suffering an apparent knee injury just moments into the match, the duo of Adonis & Vega$ were able to pick up the win following a breathtaking 450 splash from Adonis.

Heavyweight Championship in the main event! The Fraternity inserted themselves into the proceedings, followed by The Mane Event looking for revenge. Team Storm hit the ring to throw an even bigger wrench in the mix. In the middle of the confusion, Wardlow offer a handshake to Palace to finish the bout fairly… only to attack Palace and hit him with the All Day Driver and regain the title! As events unfolded, it now appears we have three groups of three all chasing IWC’s top titles – Wardlow and The Fraternity, Palace and The Mane Event, and Jack Pollock and Team Storm. As it stands Team LaBar has all of the gold, but who will emerge on top now that definitive lines have been drawn in the sand?

Our next event is Night of the Superstars 7 featuring the dream matchup of Rey Mysterio Jr. vs. DJZ, as well as appearances from Jack Swagger, and WWE Hall of Famers Rikishi and Mark Henry! Information and tickets available now at IWCwrestling.com!