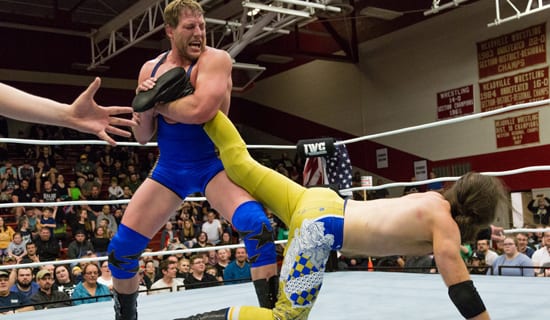 Meadville, PA is one of IWC’s favorite spots to visit every year. Not only do we get to see some of the biggest superstars in wrestling’s past, present, and future, but we also get to see all the great Meadville fans. This year’s Night of the Superstars 7 was no different, with a huge turnout to see some great IWC action!

The advertised main event of Rey Mysterio, Jr. vs. DJZ lasted about 30 seconds before Ophidian and IWC Super Indy Champion Gory hit the ring and attacked both men. Gory was upset that DJZ got the opportunity to wrestle Mysterio on this big stage when Gory pinned DJZ less than a month prior at IWC’s SEVENTEEN event. Instead, the night’s host “Big League” John McChesney decided to make it a TAG TEAM MATCH, playa! Despite the early jump by the slithery duo of Gory & Ophidian, Rey & DJZ were able to pick up the win with a stereo 450/frog splash combo!

Fresh off of an induction into the WWE Hall of Fame, the “World’s Strongest Man” Mark

Henry came to Meadville, PA to host the “World’s Strongest Battle Royal”! One of the odds-on-favorites “Titan” Dennis Jackson was ganged up on and thrown out shockingly early. The same could be said for Duke Davis & Ganon Jones, Jr., the Mane Event. Chikara’s The Proteus Wheel trio made their official IWC debut, but Callux the Castegator, Frantik, and Volgar were dispatched as well. Eventually, Andrew Palace, David Lawless, Officer Dan Murphy, and Dylan Bostic were left standing. Miscommunication between Lawless and Murphy led to both being eliminated, leaving old rivals Palace and Bostic as the final two. Bostic eventually got caught on the top rope, and Palace took advantage and du

mped him to the floor, giving him the win! Bostic took exception to the result, confronting Palace and Mark Henry after the match. Henry inducted Bostic into the Hall of Pain with a huge headbutt before Palace disposed of Bostic with the Hernia Driver once and for all.

Team Storm did not have a great night at Night of the Superstars 7. Jack Pollock battled former World Heavyweight Champion Jack Swagger, with Jaxon Argos attempting to lead the crowd in a chant of “We The Team Storm!” It didn’t

have quite the same ring to it as “We The People!”, which Swagger proved seconds later. Despite attempted interference from Argos and RC Dupree at ringside, Swagger picked up the win with the Ankle Lock. The next match saw Argos & Dupree take on the team of Keith Haught and WWE Hall of Famer Rikishi! Haught & Rikishi proved to be too much for Team Storm, even delivering stinkfaces to Argos & Dupree after the match!

IWC World Heavyweight Champion Wardlow brought the championship to Meadville for a defense against “Double D” Darin Dinero! Dinero brought the fight to Wardlow, nearly knocking “the man with war in his name” out with a rolling elbow. Just as it seemed Dinero had the champion reeling, Wardlow was able to put Dinero away with the All Day Driver. What challenge will be next for Wardlow?

Chelsea Green brought the “hot mess” back to IWC as she challenged IWC Women’s Champion Britt Baker! These two women have battled several times in IWC, with Baker coming out on top each time. This night in Meadville was no different. Chelsea attempted to use Baker’s Rings of Saturn variation against her. The future Dr. Baker was able to reverse it and apply the hold to Green, leading to the tap out and another successful defense!

Fans who filed into the building early saw three pre-show matches as well. The Mane Event

defeated Lawless and Order. Duke Davis & Ganon Jones, Jr. are on a roll and it’s only a matter of time before the duo get a shot at the IWC Tag Team Championship once again. Katie Arquette also got a win against “Bloody Adorable” Jinx. Numerous interference from Arquette’s entourage at ringside, Calvin Couture & Elijah Dean, led to her getting the win with a huge blockbuster suplex off the top rope. Also, the IWC High Stakes Title was successfully defended by Marshall Gambino as he took on “Omega” Aaron Draven, Dan Hooven, PB Smooth, Chest Flexor, and his former protege Jami Jameson in a no holds barred match. Can anybody unseat the dangerous veteran?

IWC’s schedule going into the summer is loaded! On April 28th we return to the Clearfield County Fairgrounds with Clearfield Carnage 4. May 11th and 12th sees IWC team up with RISE and Impact Wrestling with RISE’s “Lights Camera Action” seminar, as well as their “Rise – Ascent” TV tapings! June 9th will be IWC’s return to Court Time Sports Center in Elizabeth, PA with Super Indy 17! We hear rumors that the first names for Super Indy will be announced very soon, so stay tuned!