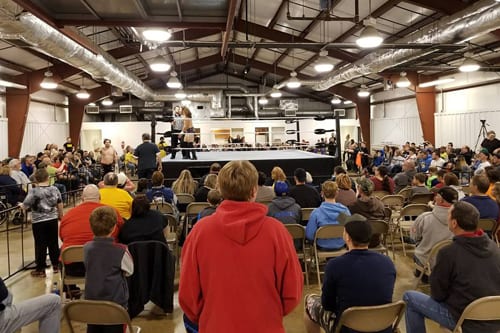 Clearfield, PA is always one of our favorite stops on the calendar in IWC! We returned on April 28th for Clearfield Carnage 4 and the fans were ready for action!

In the opening contest, The Mane Event scored a huge win over Lawless and Order! Ganon Jones, Jr. and Duke Davis want their IWC Tag Team Titles back, and they continue to prove their claim to being the most dominant team in all of IWC.

Andrew Palace was scheduled to face Team Storm’s Jaxon Argos in one on one action, but Argos weaseled his way out of the match, instead joining myself on commentary for the duration of the evening! The Clearfield crowd wasn’t left disappointed however, as Palace would instead face Chris LeRusso. A match that has happened before in Clearfield, the crowd knows that every time these two step in the ring together it’s going to be a classic, and this time was no different. The end saw Palace get the victory with a Hernia Driver, but it should have been the two time Rookie of the Year that was planted into the mat for that three count…

In one of the most absolutely absurd, violent matches in IWC history, Marshall Gambino retained his IWC High Stakes Championship over The STD’s Chest Flexor. Pump Ferrari tried his best to give his buddy the edge with questionable objects such as lawn gnomes, a staple gun, light sabers and even a taser, but to no avail… the majority of weapons were in turn used on Ferrari, and even an appearance from Cory Futuristic as Teen Wolf wasn’t enough to bring the High Stakes Title to the STD’s camp. You read all of that right.

“The Titan” Dennis Jackson beat Jack Pollock by disqualification after fellow Team Storm member RC Dupree attacked Jackson from behind and Argos left the commentary position to join him! Pollock was able to leave Clearfield in one piece, but with Jackson also able to walk away from the carnage, the $25,000 bounty on the head of “The Titan” set by Chris LeRusso still stands.

Ever since The Cogar Brothers made their presence felt in IWC, Remy LaVey has transformed into a completely different person. A Six Man Tag Team Match was scheduled for Clearfield Carnage pitting LaVey’s new group, The Culmination, against Dan Hooven, Jason Tyler and LaVey’s former best friend, Keith Haught.

In early April, The Cogar Brothers attacked Jason Tyler backstage, effectively eliminating him from the match in Clearfield. In a twist of events however, what was expected to turn into a Handicap Match remained a Six Man encounter as Santana Diamonds returned to IWC to team with Hooven and Haught! The mood changed quickly, and The Culmination continued their purge through the IWC locker room, picking up the decisive win.

Darin Dinero kept his momentum going, defeating Jon Rodin in what could have been Rodin’s most impressive IWC bout to date. “The Juggernaut” looks to keep opening eyes across Pennsylvania, while Dinero is surely eyeing up the IWC World Heavyweight Championshp!

Katie Arquette defeated fan favorite Zoey Skye thanks to a mysterious spray bottle blinding the eyes of Skye while the referee was distracted. The Queen of the Silver Screen has proven her worth in IWC’s Women’s Division on more than one occasion. There was the vicious Steel Cage Match against LuFisto back in August, as well as taking IWC Women’s Champion Britt Baker to the limit at Seventeen in March. With Calvin Couture and Elijah Dean in her back pocket, Arquette may be closer to the Women’s Title than we think…

In the main event, Wardlow retained the IWC World Heavyweight Championship against Team Storm’s RC Dupree. In his first singles main event, The Eccentric Artist had the Clearfield fans on the edge of their seat. Yes it took interference from Argos and Pollock. It took Andrew Palace and Dennis Jackson adding to the confusion in the midst of it all. But even if only or a brief moment, fans thought on this night the championship was changing hands.

Darin As Wardlow was inches from retrieving his title, Dupree had one last bit of fight left. That last ounce of energy was compromised as Wardlow hoisted Dupree on his shoulders and drove him through a ladder on the outside of the ring with a devastating Wardlow Driver!

It was RC’s finest hour. Though he didn’t capture the championship, fans referring to him as the “darkhorse” of Team Storm may be rethinking those sentiments… As for Wardlow, the 270 pound monster from Cleveland plans on continuing his reign atop of the IWC mountain throughout the summer, if not longer. Who can dethrone the dominant champion?

IWC is also looking ahead to the summer as we have some huge events lined up in the coming weeks! On May 12th, IWC teams up with IMPACT Wrestling and RISE to present a day full of TV Tapings featuring the top Women’s Wrestlers from around the world. Then on June 9th, it’s the seventeenth annual Super Indy Tournament! For more information, visit IWCwrestling.com!