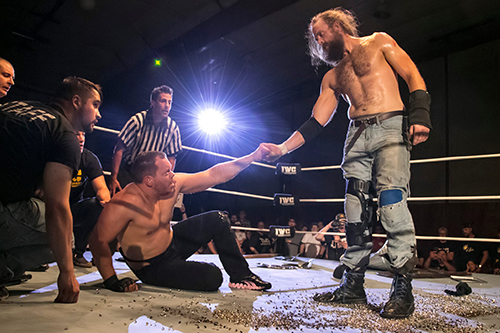 IWC kept the hot summer rolling through July 14th with Threat Level Midnight: Part Deux! With IWC owner Justin Plummer occupied during the evening with his match against Jack Pollock, he entrusted the duties of Special Guest General Manager to none other than the legendary Bruce Prichard! In addition to being the host of the 2-time Podcast of the Year “Something to

Wrestle with Bruce Prichard”, and a former executive with WWE and Impact Wrestling, Prichard was the right-hand man to Vince McMahon, so who better to run IWC for a night?

Prichard began the night making an impact with Team Storm. Jaxon Argos & RC Dupree barged out interrupting Prichard to demand a match for the night. Bruce obliged and put them in a handicap match against Shane Taylor! The 300 lb. monster disposed of Argos & Dupree, making them a non-factor for Plummer’s bout later in the evening. But, Bruce wasn’t finished, as he promised a surprise later in the night.

The main event signed by Bruce saw the iWC World Heavyweight and Tag Team Titles defended for the first time ever in the same match, as champions Team Labar (Wardlow, Chris LeRusso, and “The Titan” Dennis Jackson) defended their titles against former champions Andrew Palace and The Mane Event (Ganon Jones, Jr. & Duke Davis). It appeared Palace got the victory after a wild match, but Prichard interjected himself to point out that Palace pinned what appeared to be the illegal man. With all the confusion, and nobody being sure who the legal man actually was, Prichard ordered the match restarted. Team Labar disposed of TME on the floor, leaving Palace

Prichard then revealed his surprise for Andrew Palace… he was re-hiring a man who quit IWC months ago, Jock Samson. Jock was frustrated with how his IWC career was going and threatened to go to other local promotions as he walked out the front door with his bag behind him. While he was gone, he had disparaging things to say about Palace on social media. So, why is Jock back in IWC if he wanted to leave? What does Bruce Prichard have to do with bringing him back? And what does it have to do with Andrew Palace?

A grudge match months in the making saw IWC owner Justin Plummer defending his family and his honor against Team Storm’s Jack Pollock. Pollock was fired from IWC after Team Storm ran rampant and disobeyed the rules for too long. Pollock manipulated Plummer to get his job back by threatening Plummer’s wife Jenny. Shane Taylor tried to stick up for his friends from college, but interference from Team Storm showed that Plummer needed to do this himself.

Plummer put up a valiant effort, more than anybody in the crowd and the locker room could have expected. He withstood a slam from the ring to the floor through a table, and several disgusting shots with a singapore cane. He brought the fight to Pollock with a pedigree on thumbtacks and a powerbomb onto steel chairs. Eventually, Pollock was able to boot a chair into Plummer’s face to score the win. Pollock appeared to show respect for Plummer after the bout by shaking Plummer’s hand, but showed his true colors, booting Plummer low and celebrating over Plummer’s broken body. As a result, Pollock earns a shot at Wardlow… and it’s going to be inside a 15-foot-high steel cage at Caged Fury!

The IWC High Stakes Title was on the line in a dog collar match as Marshall “The Bull” Gambino defended his title against Chest Flexor’s wife and manager, Ginger. Obviously not a wrestler, Ginger had to rely on wily tactics to try and take Marshall down, but they didn’t last. Flexor was at ringside and quickly interjected when it appeared Ginger was in danger, but she ended up taking an unintentional elbow from Gambino. The rest of the Sexy Talented Dudes hit the ring to attack Marshall and defend Ginger, but Jami Jameson ran to the ring with a barbed wire board to even the odds. Marshall made one final challenge to Flexor to a High Stakes Title match inside a steel cage at Caged Fury, with the emphasis

on “final”. Will this be Gambino’s swan song in IWC? Will Flexor finally get the win over his former mentor?

The ongoing saga between Keith Haught and Remy Lavey continued as Haught teamed with Dan Hooven to take on Remy’s Culmination cohorts, the Cogar Brothers. Atticus Cogar was able to get the win on Haught

after using a foreign object while Remy had Hooven distracted on the floor. It’s obvious the numbers game is against Haught & Hooven, as the Culmination has taken out everybody willing to stand up with them. Can they somehow even the odds going forward?

Katie Arquette picked up a big victory over the debuting “Feral Female of Pro Wrestling” Honey Badger. All throughout the match, Arquette made her displeasure towards IWC Women’s Champion Britt Baker known.

Baker has been conspicuous by her absence since May’s RISE live event where she defended the title against Mercedes Martinez. Arquette wants another shot at Baker… will she be able to get it?

Rey Bucanero. A legend in his own right, Bucanero put up a strong fight against Adonis, but a breathtaking shooting star press gave Adonis the win in front of his hometown crowd.

Gory picked up a much-needed win over Ophidian after losing the IWC Super Indy Title in the tournament back in June. After an incredible bout, Gory finished the slithery snake with a QAS followed by Trepidation. Gory heads into Caged Fury 2018 to challenge the new champion Jonathan Gresham for the title. Will he regain the championship after Gresham’s history-making title win?