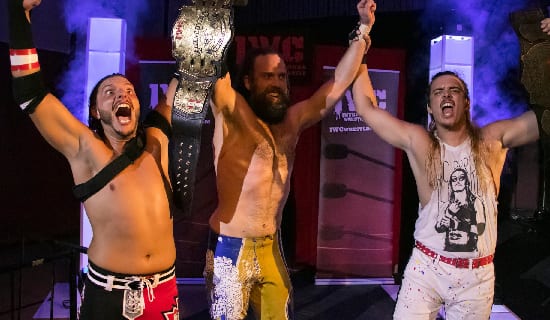 The Team Storm Takeover began in the three-

way IWC Tag Team Title match early on in the night. Chris LeRusso defended the titles with his new partner, the returning Bulk Nasty, against Team Storm members Jaxon Argos & RC Dupree, and former champs The Mane Event. TME seemed to have the match in hand, but Dupree tied up Duke Davis in the ropes while Argos pinned LeRusso to win the belts. If you thought Argos was insufferable before…

In the main event of Caged Fury 2018, IWC World Heavyweight Champion Wardlow defended the title against Team Storm’s leader Jack Pollock. Wardlow overpowered the crafty Pollock several times, even powerbombing Pollock into the cage, leaving a disgusting discoloration on Pollock’s back. Pollock kept fighting, even kicking out of a top rope All Day Driver from the monster Wardlow.

Against Wardlow’s wishes earlier in the night, his Team Labar partners Bulk Nasty and Chris LeRusso rushed out to ringside. Bulk ripped the cage door off its hinges, allowing LeRusso to sneak inside. LeRusso should have listened to the champion, because as he wound up a superkick, Pollock ducked and LeRusso hit Wardlow. It didn’t put the champ out yet, but after a low blow, a steel chair, and two boots to the head of Wardlow, Jack Pollock pinned Wardlow to win the IWC World Heavyweight Championship. After Wardlow suffered only the second loss of his career, he snapped and attacked his manager Justin Labar, laying him out with two All Day Drivers, effectively ending their business relationship.

Marshall “The Bull” Gambino said goodbye to the IWC fans following a storied 14 year career in IWC. After five IWC Tag Team Title reigns with his brother Mickey, Marshall won his first IWC singles title in March, pinning James Ellsworth for the IWC High Stakes Title. Since then, he’s been dealing with the thorn in his side, his former protege Chest Flexor. Marshall said enough was enough and his final battle would be with Flexor inside the cage. Flexor was accompanied to the ring by Ginger and the rest of the Sexy Talented Dudes, while Marshall came to the ring with his new protege Jami Jameson, one of his trainers Super Hentai, and his brother Mickey.

The larger Gambino was able to take an early advantage and literally beat Flexor down between the cage and the ring apron. Flexor fought back with some weapons, but after Gambino’s ringside associates attacked the STDs, Mickey slid in the cage to help his brother out. After one last Curse of the Gambino to Flexor, the Gambinos set up a table… and that’s when the lights went out. When they came back on, “The Kingpin” Brian McDowell appeared in the ring and threw his bowling ball at the Gambinos! He missed. But the distraction allowed Flexor to take Mickey out of the equation and climb the cage. Marshall followed and McDowell set the table ablaze. Flexor turned and drove Marshall off the top of the cage through the flaming table to pin him and win the High Stakes Title!

In a match to determine #1 contender to the IWC Super Indy Title, “The King of the Suplexes” Jeff Cobb returned to IWC to take on former champion “The New Age Plague” Gory. It was a classic battle of speed vs. size as Cobb literally threw Gory from one side of the ring to the other. Flashes of speed from Gory gave him the advantage, as a sizzling series of switches ended up seeing a QAS from Gory to Cobb giving him the win and the shot at Super Indy Champion Jonathan Gresham!

The war between The Culmination and Keith Haught & Dan Hooven heated up at Caged Fury… quite literally, actually. Haught & Hooven were seemingly left without a partner as Remy Lavey & The Cogar Brothers attacked and injured everybody who dared to stand against them. But that changed when Haught & Hooven recruited Pittsburgh wrestling stand-out and longtime IWC fan “The Firebird” Shawn Phoenix to stand beside them!

What ensued was one of the most brutal battles in an IWC ring in recent memory. Atticus Cogar stuck skewers in the head of Dan Hooven before superkicking them off. Otis Cogar tried to use a taser on Keith Haught. Atticus introduced a pair of brass knuckles, but before he could use them, Haught got a hold of them. After several shots to the jaw of Otis Cogar, Haught yelled for Phoenix to send him to hell. Phoenix obliged with a fireball to the face of Otis, giving Haught, Hooven, and Phoenix the big win. Haught and Hooven celebrated their first big win over the Culmination, and Phoenix won his first match in an IWC ring, something he dreamed of since he was 14 years old in the front row.

Jock Samson returned to IWC in July thanks to guest general manager Bruce Prichard re-hiring him, and his first goal was targeting Andrew Palace. Jock’s personal issue with Palace escalated at Caged Fury, as Jock clocked Palace with his cowbell, drawing a DQ from referee CJ Sensation. Jock proceeded to hang Palace for several minutes with the bullrope attached to his cowbell, only releasing when Sadie Gang ran him off. This was a disgusting act that got Jock suspended from IWC for the next month. How will Palace respond when Jock returns?

IWC returns to the White Oak Athletic Association on September 22nd with the best and brightest from the Iron City Wrestling Academy making their debuts at Proving Ground 7. We return to Court Time Sports Center on October 6th with legendary ring announcer Gary Michael Cappetta in the house!