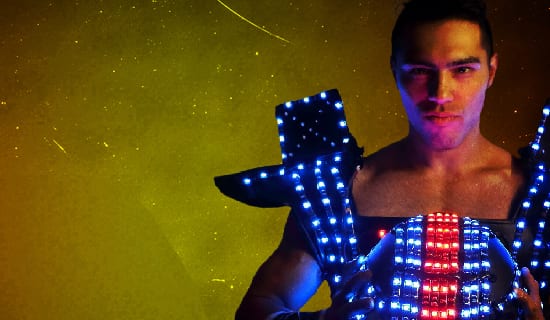 IWC returns to the White Oak Athletic Association in White Oak, PA on Saturday night September 22nd, 2018 with PROVING GROUND 7! Proving Ground provides an opportunity to new talent from IWC’s Iron City Wrestling Academy and beyond to prove themselves inside an IWC ring. Let’s take a look at the lineup…

Caged Fury 2018 saw a Team Storm Takeover, for better or worse. Jack Pollock defeated Wardlow to win the IWC World Heavyweight Title, while Jaxon Argos & RC Dupree picked up the IWC Tag Team Titles in a three-way against The Mane Event and Team Labar. With the three men being on top, Argos has announced that Proving Ground 7 will feature a… *sigh*… “Team Storm Championship Extravaganza Bonanza Celebration Coronation Ceremony.” We have no idea what’s in store, and we are not sure if we even want to. Please still come.

In October 2004, an IWC live event took place titled “Youth Gone Wild”. A predecessor to what would eventually become Proving Ground, it saw the debut of the newest batch of trainees from the IWC training school at the time, the Coalition of Competition. Included among those students were a tag team of brothers Mickey & Marshall called The Gambino Brothers Moving Company, a young high-flyer known as “The New Face” Jason Gory, and the first Filipino Male Supermodel of Professional Wrestling, Shiima Xion. Fourteen years, countless championships, different countries, and several hairstyles later and that supermodel has become the first and only IWC Triple Crown Champion “That Yung GoHard” DJZ. DJZ is looking to give a newcomer from the Iron City Wrestling Academy an opportunity, and that newcomer is “The American Daredevil” Johnny Patch. Johnny Patch has never met a dare he didn’t like. He is all about taking chances, and his biggest thus far comes on September 22nd. Will he be able to upset DJZ in his debut?

IWC Super Indy Champion Jonathan Gresham will make his first title defense on September 22nd when he takes on the former champion Gory! At Super Indy 17 in June, David Starr pinned Jeff Cobb in the opening around after catching him with a cheap shot and a DDT off the ropes. Gory was pinned in the second round by Starr while Starr had a handful of tights. Later that night in the finals, Gresham made Starr submit to his trademark Octopus Hold. Cobb and Gory met at Caged Fury 2018 to determine the new #1 contender to the Super Indy Title, and Gory was able to come out on top. After nearly a year as a successful Super Indy Champion, Gory has a match for the title against the new champion and Super Indy Tournament winner Gresham! Will he make Gresham’s title reign short-lived? Or will this be just the beginning of a long reign for the “Octopus”?

The IWC High Stakes Title will be on the line as new champion Chest Flexor will defend against another Iron City Wrestling Academy graduate, Professor Ryan Dye! Flexor has granted an opportunity to the Professor after seeing him in action at the academy. Dye has a stunning intellect, but a twisted world view, and has been known to spend all night in his laboratory cooking up who knows what. Can he find the perfect formula to defeat Flexor to win a championship in his first ever match?

A shot at IWC Women’s Champion Britt Baker is on the line as Katie Arqutte, Ray Lyn, and Jinx mix it up at Proving Ground! Ray Lyn and Baker are longtime enemies, going back to Baker’s first ever appearance in IWC as a backstage interviewer, which led to her first match in a mixed tag against Ray Lyn. Arquette has been calling out Baker for months on end, accusing Baker of ducking Arquette after Arquette very nearly won the IWC Women’s Title back in March until the decision was reversed. The “Bloody Adorable” Jinx is a scrapper, looking for an opportunity anywhere she can find it, and has been itching at an opportunity to face the “Mayor of Brittsburgh” in one-on-one competition for nearly a year and a half. Which one of these competitors will walk away with a shot at Dr. Baker DMD and the IWC Women’s Title?

At Caged Fury 2018, Wardlow had enough. He had enough of Justin Labar’s constant interference, the revolving door of Team Labar members, and enough of Chris LeRusso. After Bulk Nasty ripped the door off of the steel cage, Chris LeRusso ran in and tried to superkick Jack Pollock to help Wardlow. Instead, Pollock ducked, Wardlow ate the superkick, and several boots from Pollock later and Wardlow was no longer the IWC World Heavyweight Champion. Not only that, he suffered only his 2nd loss in an IWC ring. After Labar didn’t heed Wardlow’s warning to let him handle things, Wardlow snapped and attacked Labar, effectively firing him as a manager and striking out on his own. Now Wardlow looks for revenge against the man who superkicked him, “The Heir Apparant” Chris LeRusso. Will LeRusso be able to survive against “The Man With WAR In His Name”?

Shawn Phoenix made his IWC debut to back up Keith Haught & Dan Hooven against The Culmination. A journey over 14 years in the making, Phoenix was a longtime IWC fan who pursued his dream of being a professional wrestler by plying his trade across the country before coming to IWC. At Caged Fury, he very possibly ended the career of Otis Cogar by throwing a fireball in his face. Now, he must face Otis’ brother Atticus who is very surely looking for revenge. These two young lions do battle at Proving Ground 7, but who will come out on top?

At Proving Ground 6, Andrew Palace defeated the debuting Calvin Couture. This year at Proving Ground 7, Palace looks to take out another debuting member of Hollywood Couture, “The ManDime” Elijah Dean. Dean has been backup for Couture and Katie Arquette for the last several months and has proven himself effective in helping his teammates to victory. But, can he pick up the win over a former IWC World Heavyweight Champion in his debut?

Darin Dinero & Colby Redd got their first win as a tag team at Caged Fury against the high-flying No Consequences. At Proving Ground 7, Sadie Gang is faced with the opposite end of the spectrum as they take on two big men in Officer Dan Murphy and debuting ICWA graduate “The Survivor” Phillip Archer. How will they stand up to the new team?

Trained in the art of Judo Combat, “The Ronin” Stevie Lebell makes his IWC debut out of the Iron City Wrestling Academy. He has spent years in the dojo mastering his craft, but will that help him when he steps in the squared circle against “The Moneyweight” Dylan Bostic? Bostic makes his return to IWC for the first time since February, and the former IWC Super Indy Champion and Super Indy 15 winner wants to make his return a successful one. How will Bostic answer the combat experience of Lebell?

Four men are looking to jump into the IWC High Stakes Championship field, and they will compete in tag team action on September 22nd! “The Five-Alarm Fire” Jason Tyler teams with “The Country Hammer” Jami Jameson to take on the oddball team of Billy Ruxpin of the Sexy Talented Dudes and Mambo Italiano! Ruxpin entering the match makes things interesting, as his STDs teammate Chest Flexor currently holds the title. Is he looking to act as a spoiler for the other three men? Or does he want a shot at the title himself? And how will he get along with the outlandish Italian-born Mambo? Will the massive hoss team of Tyler & Jameson be able to get along in their first outing as a team?