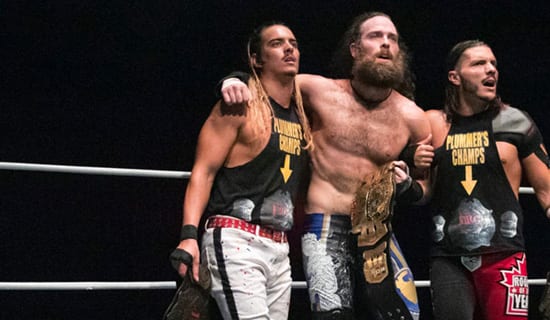 IWC’s Unbreakable event saw some high highs and low lows, but all eyes are looking to the final 3 live events of 2018 to see what happens in IWC after Unbreakable! We were joined by special guests Rosa Mendes, as well as Gary Michael Capetta, who kicked off the event with a pre-show Beyond Bodyslams live show, and returned to ring announcing for our big IWC Tag Team Title bout! Speaking of…

orm retained their titles at Unbreakable. Jaxon Argos & RC Dupree defended the IWC Tag Team Titles against former EVOLVE Tag Team Champions Anthony Henry & James “JD” Drake, the Lethal Enforcers. While Team Storm tried all their usual antics, including Argos’ grating “Jaxon 5” elbow drops, the Lethal Enforcers seemed to have their number with incredible teamwork and double-team manuevers. When Dupree was able to isolate Henry on the floor, Argos took advantage and was able to pin Drake and retain the titles. After the match, however, former IWC World Heavyweight and Super Indy Champion RJ City appeared on the screen and challenged Team Storm to a title match for Winner Takes All on November 10th! He announced his partner as former WCW Champion David Arquette, but Arquette was forced to cancel due to an injury and filming duties. Taking

Jack Pollock defended the title in a six-way ladder match against Andrew Palace, Jock Samson, both members of The Mane Event (Ganon Jones, Jr. & Duke Davis), and a mystery sixth man. As the match was about to begin, Palace and Jock attacked one another and disappeared from view. As TME double-teamed Pollock, the mystery sixth man, a returning Jimmy Vega$ emerged! After a short time in the match, Vega$ tried to climb for the title but was cut off by Bulk Nasty! Bulk and Vega$ have had issues all year until Vega$ was sidelined by an injury. Bulk and Vega$ brawled to the locker room and Vega$ wasn’t seen again.

Palace and Jock continued their brawling back into the ring and Palace was seemingly obsessed with Jock’s cowbell and bullrope. After Jock hung Palace back in August, who could blame him? The Mane Event had Jack Pollock set up to go through a table when Jaxon Argos & RC Dupree of Team Storm interfered and drove both men through the table. With Palace hanging Jock with Jock’s own bullrope, Team Storm helped Pollock climb the ladder and retain his championship. After Pollock’s victory, IWC owner Justin Plummer told Pollock that if Pollock was to retain, he was challenged by a former IWC World Heavyweight Champion… the “Innovator of Violence” Tommy Dreamer! Dreamer will battle Pollock in an Extreme Rules match on November 10th!

The Culmination picked up a much-needed victory over Dan Hooven and Shawn Phoenix at Unbreakable, but the body count rose in the war between the two sides. With Keith Haught handcuffed to the ringpost, the Culmination was able to pick up the win over Hooven & Phoenix. After Remy Lavey & Atticus Cogar pinned Phoenix, Cogar announced that it wasn’t enough and

he wanted Phoenix to pay for taking out his brother Otis at Caged Fury. The two men set up a table on the floor and tried to stomp Phoenix’s head through it, but Hooven made the save. Phoenix rose to the top rope and put Atticus away with a 450 through the table on the floor, but Atticus moved. The momentum sent Phoenix crashing to the table where his head hit the floor. While doctors and crew attended to Phoenix, Atticus pulled out a hammer and hit Hooven’s knee with it. Phoenix was taken out of the building in an ambulance with a fractured skull and another friend of Haught’s has fallen to the Culmination. How much more can either side withstand?

kes Title was put up for grabs as champion Chest Flexor took on Max Caster, Jami Jameson, and “The Ronin” Stevie Lebell. Since Flexor was able to choose the stipulation, and the main event for the night was a ladder match, he picked a REVERSE ladder match. Chaos ensued as ladders, chairs, and guardrails were introduced into the match as all four men tried to hang the High Stakes Title above the ring to win the match. Eventually, the Sexy Talented Dudes got involved on the floor and Corey Futuristic helped elevate Flexor to hang the title and retain.

Someone looking forward to the opportunity at gold is Katie Arquette. She finally gets her shot at Britt Baker at Winner Takes All on November 10th. But on the way, she had to take on Kylie Ray at Unbreakable! Kylie very

nearly played spoiler to Arquette, but a distraction from Calvin Couture & “The ManDime” Elijah Dean helped Katie hit a spear and pick up the victory over Smiley Kylie. Will this victory help give Katie the momentum she needs going into a match against the Mayor of Brittsburgh?

Dylan Bostic made his return to Court Time Sports Center a memorable one. He was able to defeat Jason Tyler in a hotly contested opening match. Later in the night, Gory defeated the debuting Maxwell Jacob Friedman, but was met by Bostic’s attack afterwards. Bostic announced his intentions at the IWC Super Indy Champion Jonathan

Gresham. However, his attack on Gory may have backfired as Gory has been added to Bostic’s match with Gresham at Winner Takes All, making it a three-way!

The war between Wardlow and Team Labar continued as Wardlow faced the monster Bulk Nasty, with Chris LeRusso in his corner. The two hosses met in the squared circle and neither side was able to seemingly get an advantage over the other. With the referee down, it seemed like Wardlow would hit the All Day Driver, Chris LeRusso hit the ring and tried to hit Wardlow with a chair, just as had happened at Proving Ground 7. Wardlow was ready and moved just in time for LeRusso to hit Bulk.

LeRusso ran, Wardlow hit the All Day Driver, and picked up the win over Bulk Nasty!

Sadie Gang continued their win streak over the IWC tag team division. This time, they picked up a win over Hollywood Couture. Recent Iron City Wrestling Academy grad “The American Daredevil” Johnny Patch wrestled Chris LeRusso to a no-contest when Bulk Nasty and Wardlow got involved in the bout.

IWC’s 2018 comes to a close with a trip to Clearfield on November 3rd, our return to Court Time on November 10th, then our last event of 2018, the first-annual Pittsburgh Wrestling Classic on December 8th!