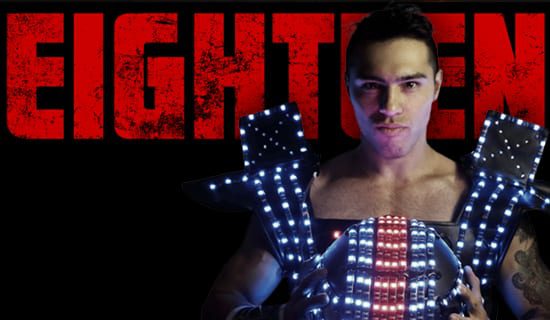 IWC returns to our home base at Court Time Sports Center in Elizabeth, PA on Saturday night March 16th, 2019 to celebrate our 18th anniversary…

On March 16th history will be made! Not only will we celebrate 18 years, but either IWC World Heavyweight Champion Wardlow or IWC Super Indy Champion “Big League” John McChesney will become only the second man ever besides WWE’s Elias to hold both of the IWC major titles at the same time! Will it be the dominant man with WAR in his name? Or will Big League make history once again?

After getting his start in 2004 as “The First Filipino Male Supermodel of Professional Wrestling” Shiima Xion, DJZ has become one of the most iconic wrestlers in IWC history. In fact, he is the only man who has held the IWC World Heavyweight, IWC Super Indy, and IWC Tag Team Titles in his IWC career. On March 16th, he will team with none other than “DeeeeeeeeeeeeeeeeLicious” Jimmy DeMarco to take on Gory & Facade, Flippin’ Ain’t Easy! These four men were at the top of IWC several years ago with DeMarco holding the IWC World Heavyweight Title, FAE holding the IWC Tag Team Titles, and DJZ with the IWC Super Indy Title all at the same time. Now they will converge on the squared circle to say goodbye to DJZ in his final match in IWC!

Madison Rayne made her IWC debut at Cold Blooded to challenge the “Queen of the Silver Screen” Katie Arquette for the IWC Women’s Championship. After lots of interference from Arquette’s “co-star” Calvin Couture, backstage interviewer Dani Grey (who Arquette attempted to humiliate a month prior at Reloaded) ran interference of her own and slapped Couture. The distraction provided Rayne the opportunity to capitalize and pin Arquette to win the title! Katie’s manager Justin Labar immediately demanded a rematch for his client, and it was granted! Will Katie be able to regain the title? Or is this just the beginning of Madison’s reign?

The IWC tag team staple returns, the four-way tag scramble! IWC Tag Team Champions The Mane Event will defend their titles against The Culmination, Team Storm, and Sadie Gang! The three challenging teams all had run-ins at Cold Blooded. TME defended the titles against the Culmination when Team Storm stuck their noses in and Jaxon Argos threatened to use his Reset Button to get a shot at the titles. Sadie Gang ran off Team Storm, but The Culmination laid out Duke Davis & Ganon Jones, Jr. and posed above them with the titles. Which team will walk away the IWC Tag Team Champions?

Chris LeRusso has had a frustrating few months. Chokeslammed by Santa Claus, eliminated from the 16bit Challenge first, then defeated by Glacier & Johnny Patch. After months of pent up anger, LeRusso challenged anybody for a spot in Super Indy 18. He didn’t expect Dr. Britt Baker DMD to respond. The future AEW star not only accepted LeRusso’s challenge, but she put her own IWC career on the line as well! Will LeRusso qualify for Super Indy and run Baker out of town to become All Elite? Or will Baker become the first woman to enter the Super Indy tournament?

A spot in Super Indy 18 is on the line as old rivals Dylan Bostic and Andrew Palace square off on March 16th at EIGHTEEN! Since this night is a celebration of the last 18 years of IWC, why not revisit the 2015 Match & Feud of the Year? The “Moneyweight” Dylan Bostic announced at the end of 2018 that the Super Indy Title was in his sights. He has been unsuccessful in winning the title away from champions Jonathan Gresham, then John McChesney. Palace has been on a roll the last several months, getting wins over Jock Samson and Anthony Greene, and competing in an early Match of the Year Candidate with DJZ against The Mane Event. Will Palace be able to get a spot in Super Indy 18? Or will this be the way Bostic weasels his way to the title once again?

Two graduates of the Iron City Wrestling Academy will do battle as 2017 graduate Jami Jameson takes on 2018 graduate Johnny Patch! “The Country Hammer” has been attempting to win the IWC High Stakes Title this year, but has come up short on several occasions, including in a handicap match against the STDs, and getting distracted by Jaxon Argos en route to RC Dupree winning the title at Cold Blooded. A win here will keep him in title contention, but he will need to take out one of the hottest rookies in IWC, “The American Daredevil” Johnny Patch. After a big win with Glacier over Chris LeRusso & “The ManDime” Elijah Dean, will a win here for Patch get him in the title hunt?

Mambo Italiano attempted to have a dance celebration at SEVENTEEN last year, only to be attacked by the greatest Intercontinental Champion of all time, the Honky Tonk Man. This year, Mambo promises yet another Anniversary Dance Celebration!

Unfortunately for everybody in IWC, Jaxon Argos has the power of the Reset Button. After winning the 16bit Challenge, Argos kicked Jack Pollock out of Team Storm and as a result, tossed IWC into an upheaval. Will Argos use his Reset Button, or will he continue the mind games over the IWC champions? Which championship will he choose when he does?