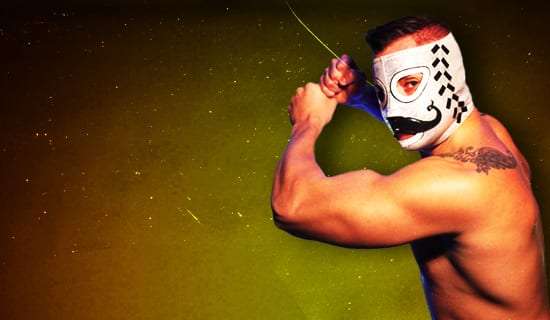 At Night of the Superstars 8, one of the hottest rising superstars in the area “The Man Dime” Elijah Dean used help from The Arquette Entourage to win a battle royal to earn a shot at the IWC Heavyweight Championship. But when it comes time to step into the ring with the champ champ, with it really be dime time? Or will Wardlow continue his historic path of destruction?!

Former IWC World Heavyweight and IWC Super Indy Champion “The Spazmanian Devil” Andrew Palace will take on the current CHIKARA Grand Champion “The Old Timey King of Swing” Dasher Hatfield! Palace has been one of the most popular stars in recent IWC history. Alternatively, Dasher was one of the most popular stars in CHIKARA, but has since fallen out of favor with the fans after attacking his former partner “Mr. Touchdown” Mark Angelosetti. Don’t miss when two men that represent their respective promotions better than any one else will face off on May 25th in a CHIKARA vs. IWC dream match!

On May 25th, one of IWC’s fastest rising stars will compete against a CHIKARA legend as “The American Daredevil” Johnny Patch faces Ophidian! Ophidian is no stranger to the IWC, but he has never encountered this upstart rookie. With close contests against DJ Z and Gory already under his belt, will Johnny finally get over the hump and score an upset victory over a sucessful vet? Or will the master of snake style sink his teeth into yet another victim?!

RC Dupree left Cold Blooded with the IWC High Stakes Championship after stealing a victory from Jami Jameson and has avoided defending his championship for nearly 3 months. But at Proving Ground 8, “The Eccentric Artist” will make his first title defense… against his best friend Jaxon Argos at the demand of Justin Plummer! Will Team Storm finally EXPLODE? Will championship gold come between these partners?

Since making his IWC debut with Remy LaVey as The Culmination, Atticus Cogar has shown our fanbase why he is one of the most dangerous & unpredictable individuals in the area. At Proving Ground 8, he goes one on one against a man equally dangerous & unpredictable, “The New Age Plague” Gory! Familiar allies and even more familiar enemies, these two will no doubt do whatever they need to pick up the victory. Will Cogar pick up one of his first major singles victories in IWC? Or will Gory continue his incredible run in IWC?

Another CHIKARA vs. IWC match will see John Francis of Coronado taking on the debuting “Lebanon Don” Joey Moses! A product of the Iron City Wrestling Academy, the Lebanon Don has been posting mysterious videos on IWC social media for the last several weeks. What does he have planned for IWC? Across the ring is the former CHIKARA Grand Champion John Francis of Coronado! Until very recently, he was known as Juan Francisco de Coronado, the “Ecuadorian Aristocrat”. But now after disavowing his Ecuadorian heritage, he seems to be embracing his All-American side. Whicih man will have a successful IWC debut on May 25th?

Two of the Iron City Wrestling Academy’s top prospects will join forces on May 25th to challenge the newest alliance in IWC! Jock Samson & Chris LeRusso, collectively known as The Regulators, have joined forces in an attempt to get back to the top of the IWC. Will they be able to find cohesion when two hungry rookies, Spencer Slade & “Sure Shot” Zach Nystrom, step into the ring against them?!

Ever since Reloaded 5.0, Katie Arquette has bullied backstage consultant Dani Grey every chance she could. Now at Proving Ground 8, “The American Bombshell” Dani Grey will make her official in-ring debut when she teams with “The Sexy Fireman” Jason Tyler and the exciting rookie “Wild Heart” Isiah Wolf to take on The Arquette Entourage, who has recruited Mambo Italiano to join the crew. Don’t miss this six person tag team match!

Since introducing himself to IWC, “The Breaker of Gains” Zander Gabriel has claimed to be Bulk Nasty’s best friend and lifting partner… a claim which Bulk has constantly denied. On May 25th, these two will take on two competitors who trained together and have become close friends both inside and outside the ring: the powerhouse team of “The Country Hammer” Jami Jameson and Dan Hooven. Can Bulk and Zander pick up a win as a team or will Hooven & Jameson show why they’re two of the hardest hitting wrestlers on the roster? Find out live when these two teams of ICWA graduates meet!

Vice Principal Edgar Johnson has put together a Board of Education for his IWC debut! He will be joined by Professor Ryan Dye and… Coach Flexor?! Will the VP, Science Teacher, and Gym Coach be able to overcome the talented young team of Keith Haught, Stevie LeBelle, and Philip Archer?!

All this plus all the fun & surprises you’ve come to expect from IWC!

In addition, don’t miss CHIKARA’s return to the Pittsburgh area after 15 years! Anniversary: The Apes of Wrath takes place at 3:00 PM on May 25th at the White Oak Athletic Association, right before IWC’s Proving Ground 8!

For more details on CHIKARA’s return to the Pittsburgh area, visit chikarapro.com!