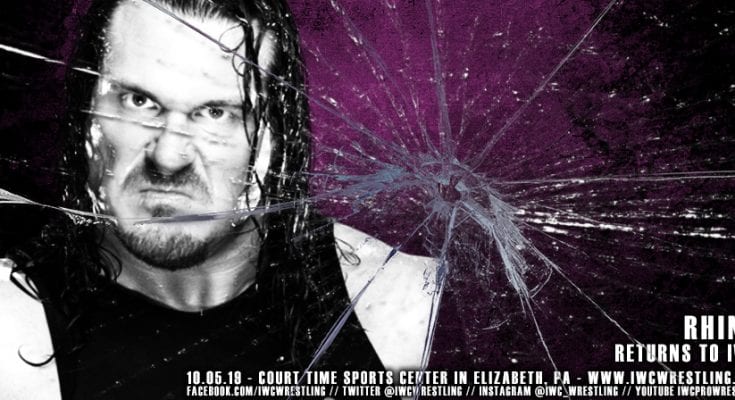 IWC returns to our home base of Court Time Sports Center in Elizabeth, PA (under new ownership!) for Unbreakable 2019! The action kicks off with our special Facebook Free-For-All pre-show on Facebook Live at 6:30 PM, and the live event begins at 7:00 PM! If you can’t be there live, make sure you check us out on IPPV here! Several matches have been signed for the event:

On October 5th, SIX former IWC World Heavyweight Champions collide in a ladder match to determine who will get a shot at JaXon Argos to reclaim their title in the main event of Winner Takes All 2019! A #1 contender’s contract will be hung high above the ring, and the first to climb the ladder a retrieve it earns the title shot!

Last month, in one of the most brutal cage matches in IWC history, Josh Alexander won the Super Indy Championship from Wardlow via referee stoppage. But Wardlow NEVER gave up! So on October 5th, we look to settle this Super Indy Championship rivalry once and for all! There will be no referee stoppages, no DQs, and no count outs! It’s Wardlow vs. Alexander for the title in an “I Quit Match”!

After having opportunities at the IWC High Stakes Championship stolen from him on two separate occasions, Dan Hooven will get one more chance to defeat RC Dupree on October 5th! Will Hooven finally get over the hump and get his revenge, or will RC find a way to keep the gold and become the longest reigning IWC High Stakes Champion in IWC’s 18-year history!

After a controversial finish at Caged Fury, Gory and Johnny Patch will join forces one last time in an attempt to definitively end their feud with the Culmination once and for all! But this time, they will be taking on all three members! Can Gory and Patch coexist a bit longer to end this rivalry on top, or will the cohesiveness of the Culmination lead them on a path to superiority?!

What might be a first for this rivalry…a fair fight. Ganon Jones Jr. will not be in attendance. Instead; Duke Davis will go one on one with Chris LeRusso with the Regulators barred from ring side. LeRusso is a 2x Super Indy Champion but will be giving up a significant power advantage to the Metahuman. Pride…and a potential shot at the IWC tag titles are on the line in this one.

Bulk isn’t going to be happy about this, but IWC management has taken notice! The odd couple of Bulk Nasty and Zander Gabriel is somehow undefeated in IWC tag team action despite their “rocky relationship”. On October 5th, they will be tested once again, this time by two men who have waited patiently for their chance to prove themselves this year in an IWC ring! Will The Sexy Fireman and Keith Haught capitalize on this opportunity? Or will Bulk and Zander somehow find a way to keep their undefeated streak alive?!

IWC Rookie standout, Spencer Slade, looks to get revenge on Dylan Dylan Bostic for his tag team partner, Zach Nystrom, after Bostic took Nystrom out with a chair to the skull last month! Meanwhile, Dylan Bostic may have unfinished business with Jimmy Nutts, but he will have to be focused to take on this former professional football player turned pro wrestling powerhouse! Will Slade get even and score a huge win in the process, or will Bostic continue to leave his opponents laying?

On October 5th at IWC Unbreakable, a brand new rookie makes his debut to challenge our most recent rookie of the year! Paris Sahara has style and agility second to none. And not only does he think he’s better looking than The Man Dime, but he claims he’s more stunning than The Dime Piece! Will Paris take Man Dime’s place in the spotlight as top rookie, or will Man Dime get the win he needs to start a big run?!

Katie’s former manager, Calvin Couture, challenged Katie Arquette with a special stipulation that if she wins shell get a rematch at the IWC Women’s Championship, and looks to finish off Justin LaBar’s master plan to dethrone the Queen once and for all! Will Calvin be able to pick up a win over the former IWC Women’s Champion or will Katie finally shut her former fashion consultant up?

All this and still much more to be announced! Stay tuned!