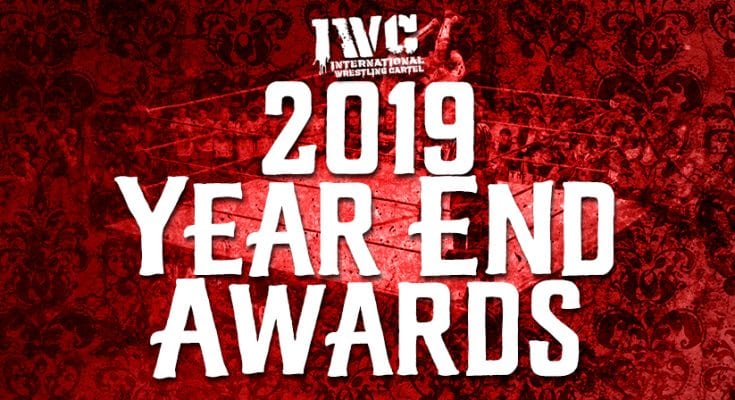 With so many tightly contested awards up for grabs, we thought we would take a look at the qualifications of the five IWC Wrestler of the Year Finalists so that you can better decide who should be crowned the best of the year!

Wardlow – The Man with War in his Name became only the second man ever to hold the IWC World Heavyweight and Super Indy Titles at the same time! He also became the second man ever to enter the Super Indy Tournament as champion, run the table, and win the Tournament to retain his title.  Wardlow had such an impressive run that he was forced to say goodbye in October because he earned a full time roster spot in AEW. In 2019, Wardlow had notable wins over Dylan Bostic (2), Bulk Nasty, John McChesney (2), Josh Alexander, Johnny Patch, and JaXon Argos.

JaXon Argos – Became the first man to claim the power of the Reset Button by winning the 16-Bit Challenge Match! Activated the Reset Button in June to capture the IWC World Heavyweight Championship and lead the Era of Argos for a six month span.  He became one of the only IWC World Heavyweight Champions to successfully defend the title outside of the United States.  In 2019, Argos had notable wins over John McChesney, Wardlow (2), Rhyno, and Gory.

Jack Pollock – After announcing that he had to step away for the year and receive major knee surgery, Jack was dumped by his Team Storm brothers.  Jack spent the majority of the year recovering and rehabilitating his knee, and his most impressive accomplishments occurred on his road to recovery!  Pollock fought hard to come back faster than any doctors projected, and got revenge on the former friends who turned their backs on him in the final chapter of one of the most dramatic rivalries in IWC History!  This feud culminated with Pollock defeating JaXon Argos to end 2019 with his second reign as IWC World Heavyweight Champion!

Josh Alexander – Josh Alexander held the IWC Super Indy Championship and the IWC Tag Team Championships in 2019.  After having to relinquish the Super Indy Title years ago, Josh returned to the United States in 2019 to reclaim the gold he never lost by defeating Wardlow via referee stoppage in one of the most violent and exciting Steel Cage Matches in IWC History!  His Super Indy title reign was short lived as he suffered a knee injury in his first defense vs. Johnny Patch, which allowed Patch to score the victory and the title.  But Josh would bounce right back when he brought his best friend, Ethan Page, back to IWC.  As The North, they scored a rare victory over TME to become IWC Tag Team Champions in a match where The North’s Impact Wrestling Tag Team Championships were also on the line!  Josh Alexanderalso had multiple match of the year nominees, and reached the finals of the Super Indy Tournament in 2019!

Andrew Palace – The only Wrestler of the Year finalist not to hold gold in 2019, Andrew Palace earned his nomination with a very impressive full body of work with what was arguably his best year ever inside of the ring.  Andrew Palace had memorable matches against TME (with partner DJ Z), Anthony Greene, The Regulators (with partner & WWE Legend Hardcore Holly), Dasher Hatfield Christopher Daniels, Josh Alexander, Brian Cage, and John McChesney.  While Palace may not have won all of these matches, he constantly performed at an incredibly high level, stealing the show on more than one occasion.

Remember, you can have UNLIMITED ACCESS to  see every match of 2019 with a subscription to the IWC Network!  SUBSCRIBE HERE!