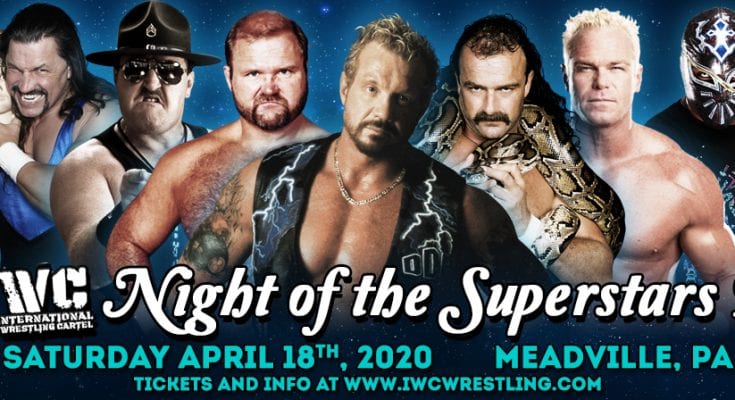 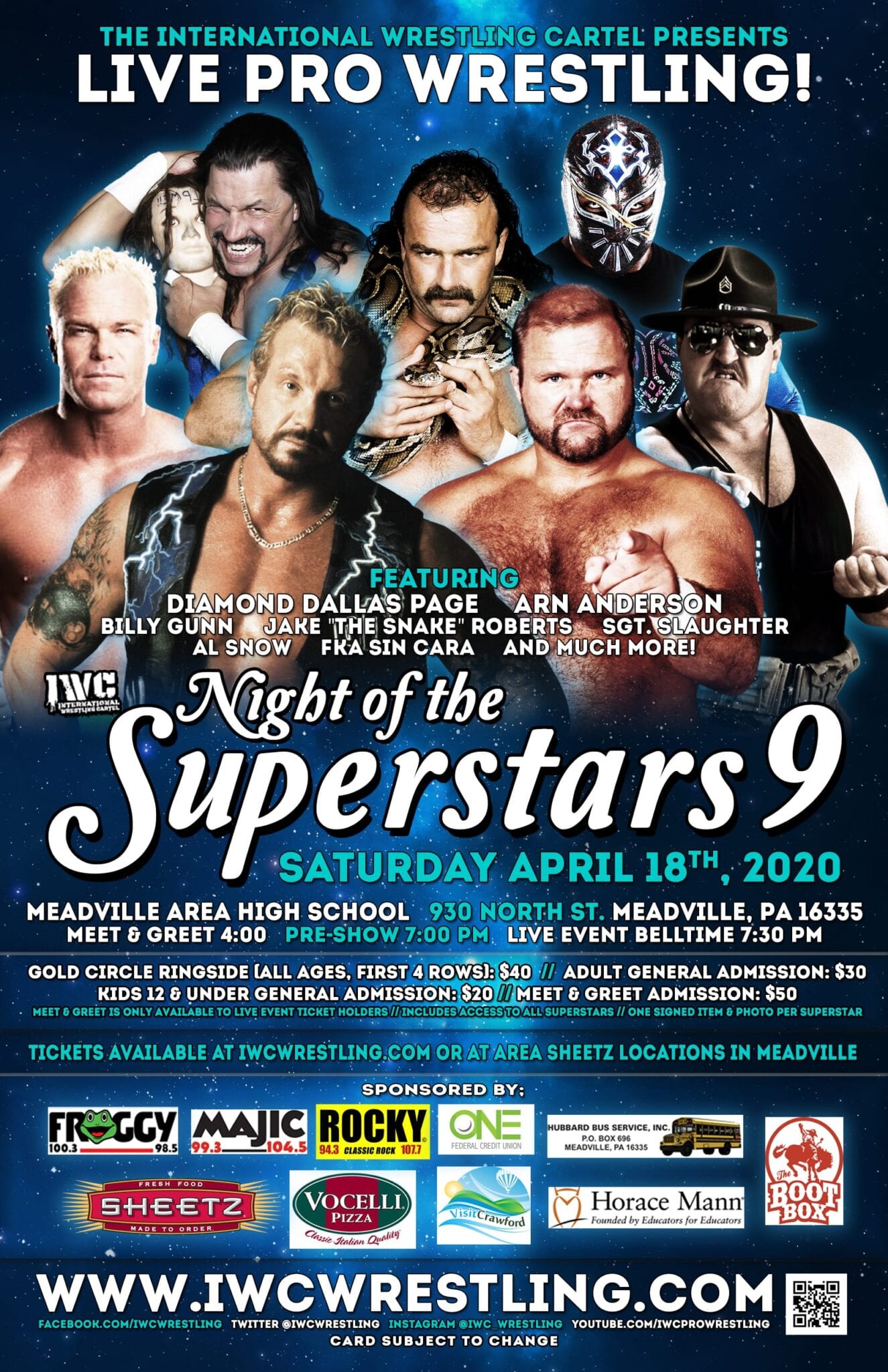 IWC Night of Superstars returns to The Meadville Area Middle School for our ninth annual fundraiser event o April 18, 2020!  Meet your favorite wrestling legends and IWC Stars from 4:00 – 7:00, then stick around for an action packed Live Pro Wrestling Event at 7:30!  Tickets on sale now right here!

This years cast of legends has already been announced, so let’s take a look at who you will get to meet LIVE and IN PERSON!  With a meet and greet pass, you will also get an autograph AND a photograph and with EACH legend! 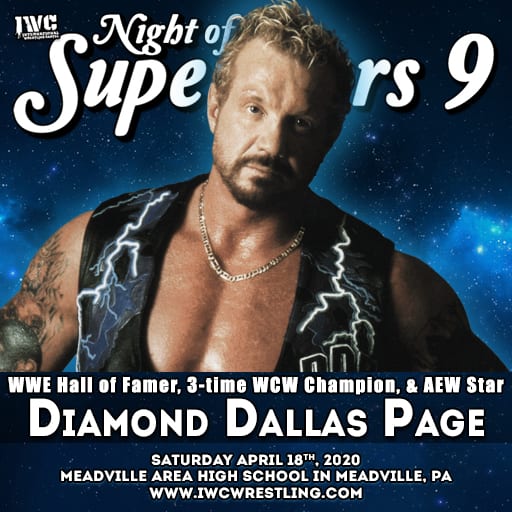 BANG! Just shortly after making his in-ring return on AEW on TNT, we are excited to announce that DDP is coming to IWC! Don’t miss your chance to meet this WWE Hall of Famer and 3-time WCW Champion on April 18th! 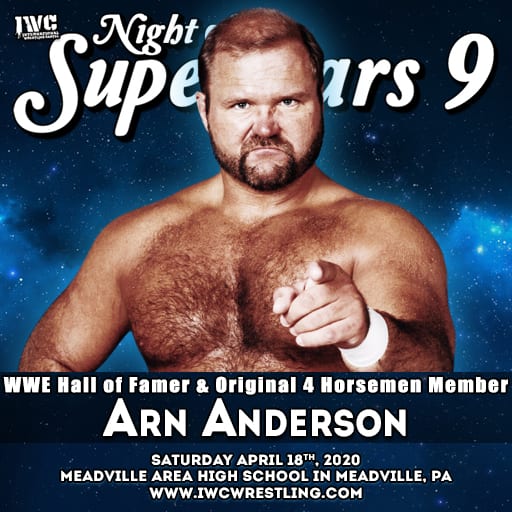 WWE Hall of Famer and original Four Horsemen member, “The Enforcer” Arn Anderson,  is part of the  STACKED lineup for IWC Night of the Superstars 9 on April 18th! 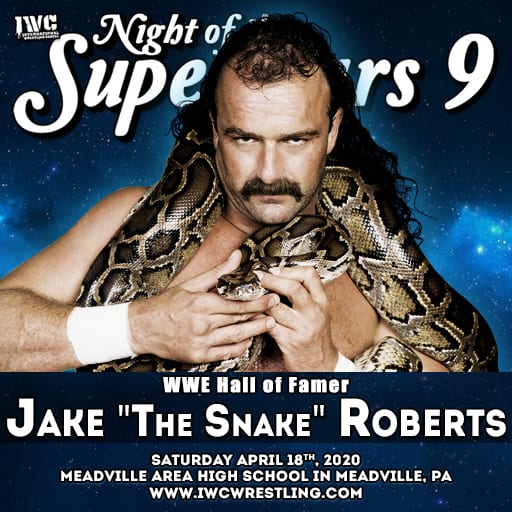 On April 18th, IWC would like to welcome WWE Hall of Famer and wrestling legend, Jake “The Snake” Roberts! Will anyone be safe from his infamous DDT? Get tickets for a fun night of family entertainment! You won’t want to miss out…. TRUST ME! 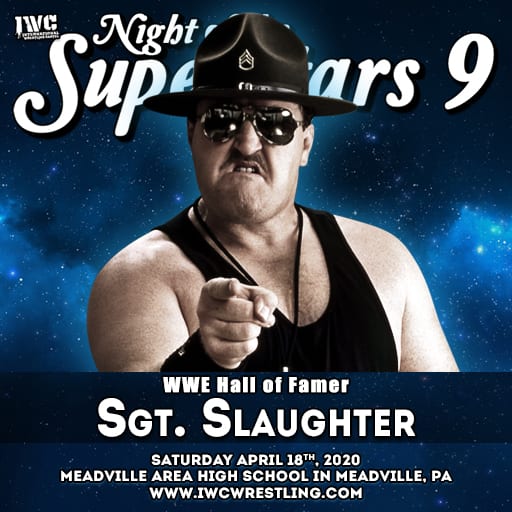 ATTENTION, pukes! Only one man has ever defeated the Ultimate Warrior for the WWF Championship. And not many more have wrestled Hulk Hogan in the Main Event of Wrestlemania. But our next guest has done both! IWC welcomes WWE Hall of Famer and GI Joe Star Sgt. Slaughter to the Night of Superstars 9 Meet & Greet AND live event! Get tickets to see this very RARE appearance. And THAT’S an ORDER! 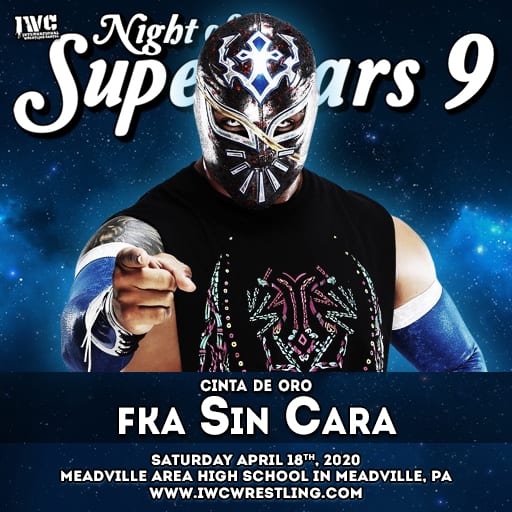 In what will be one of his very first matches in The United States after leaving WWE, Sin Cara (now known as Cinta De Oro) will bring his high-risk combat to IWC! Tickets to see one of the most exciting and high flying superstars in all of wrestling on April 18th available now! 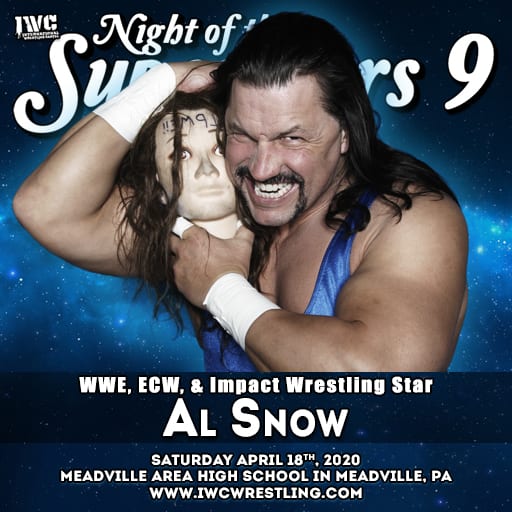 WWE Attitude Era star and ECW Legend, Al Snow with be IN ACTION on April 18th!  And as an added bonus, HEAD will be in the house as well! Meet both of these ECW and WWF Attitude era stars for the price of one on April 18th in Meadville! 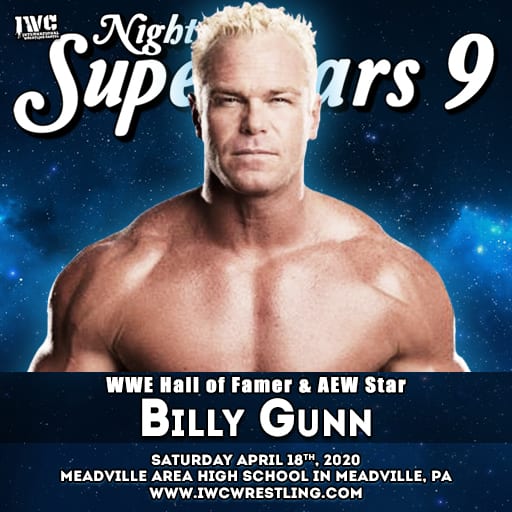 WWE Hall of Famer, former DX Member, and TEN TIME WWE Tag Team Champion, Billy Gunn returns to IWC on April 18th at Night of the Superstars! Now a member of AEW on TNT, Billy Gunn will be IN ACTION at this event! And if you’re not down with that, we got two words for ya… GET TICKETS!

Tickets are already going fast, and meet and greet is expected to see out, so order now at our ticket link right  here!  We will hold your tickets in will call at the school so they will be ready when you arrive on April 18th!