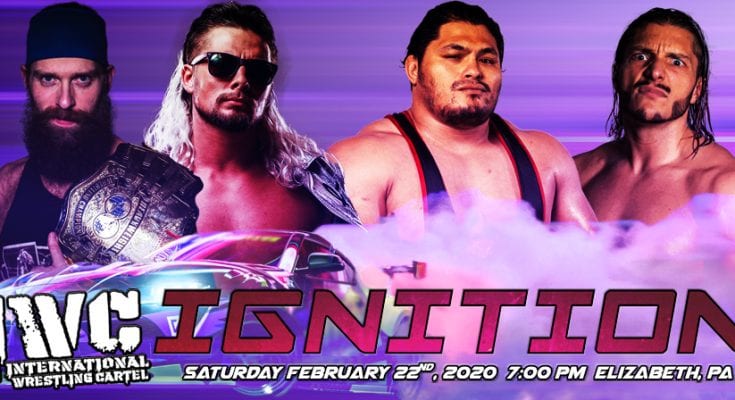 IWC Ignition on February 22, 2020 was a night to remember, and event that kept fans other feet with twists, turns, and shocking moments throughout the night!  Head over to our Digital Video Store to check out this full event, or Subscribe to the IWC Network for the same price to have unlimited access to this event and all of our events back through 2011!  Results for IWC Ignition are as follows:

Angelik defeated Chest Flexor
The mysterious Angelik made very quick work of Chest Flexor, who didn’t appear to take Angelik seriously at first.  After a fast and violent conclusion to the match, Angelik left behind one of his trademark golden feathers, but this isn’t the last we would see of him tonight! 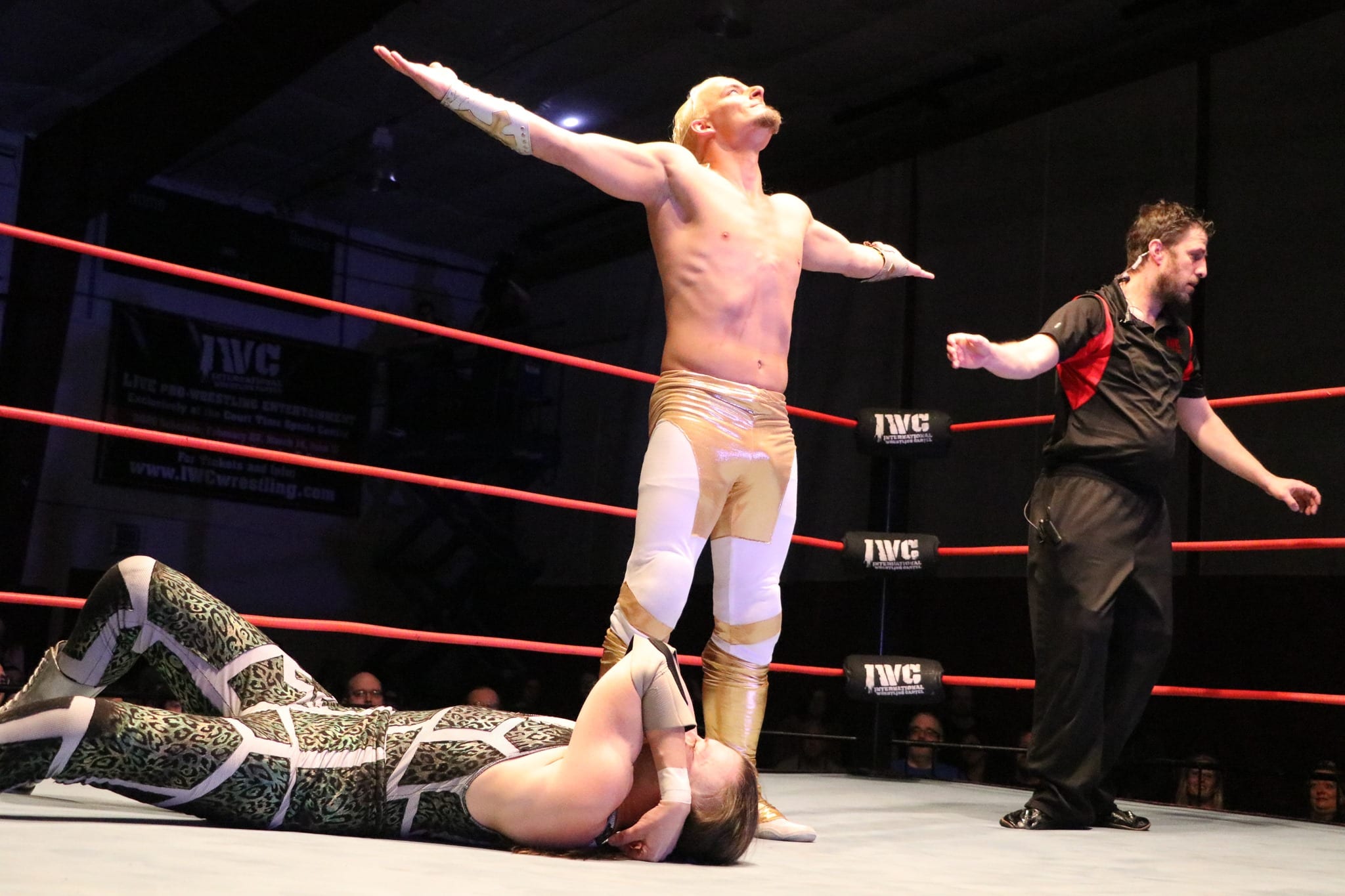 Steak and Eggs defeated The Regulators (Chris LeRusso and Jock Samson) to retain the IWC Tag Team Championships!
Before the match even started, Zander Gabriel surprised Bulk Nasty in their locker room by revealing that he had dug up some of Bulk’s old ring gear and planned to wear it to the ring in honor of their first title defense.  Bulk was less than thrilled, and stuff Zander in the locker with the older gear and locked him inside!  As a result, Bulk Nasty entered the ring alone, in a two-on-one scenario, and demanded that the ring announcer introduce the IWC Tag Team Champions as the Team of “Bulk Nasty and Bulk Nasty”!  Bulk held his own for the first few minutes, but eventually the Regulator’s man advantage proved to be too much for Bulk to overcome.  Just when it looked like The Regulators were about to capture the IWC Tag Team Titles for a historic third time, Zander Gabriel emerged from the locker room after having found a way to break out of the locker, and sprinted to Bulk’s aide while simultaneously putting on his “Bulk Gear” and trademark headband.  In the end, Zander is just what Bulk needed to fend off The Regulators and successfully defend the IWC Tag Team Titles.  When the ring announcer declared the team of “Bulk Nasty and Bulk Nasty” as STILL your IWC Tag Team Champions,  Bulk corrected him and had him announce the champs as the team of “Steak and Eggs”, FINALLY accepting Zander’s friendship and starting a new chapter in their undefeated journey in IWC.  Now on the same page, they challenged ANY team or former champs, past or present, to challenge them for their titles!  Who will step up to Steak and Eggs on March 14th?! 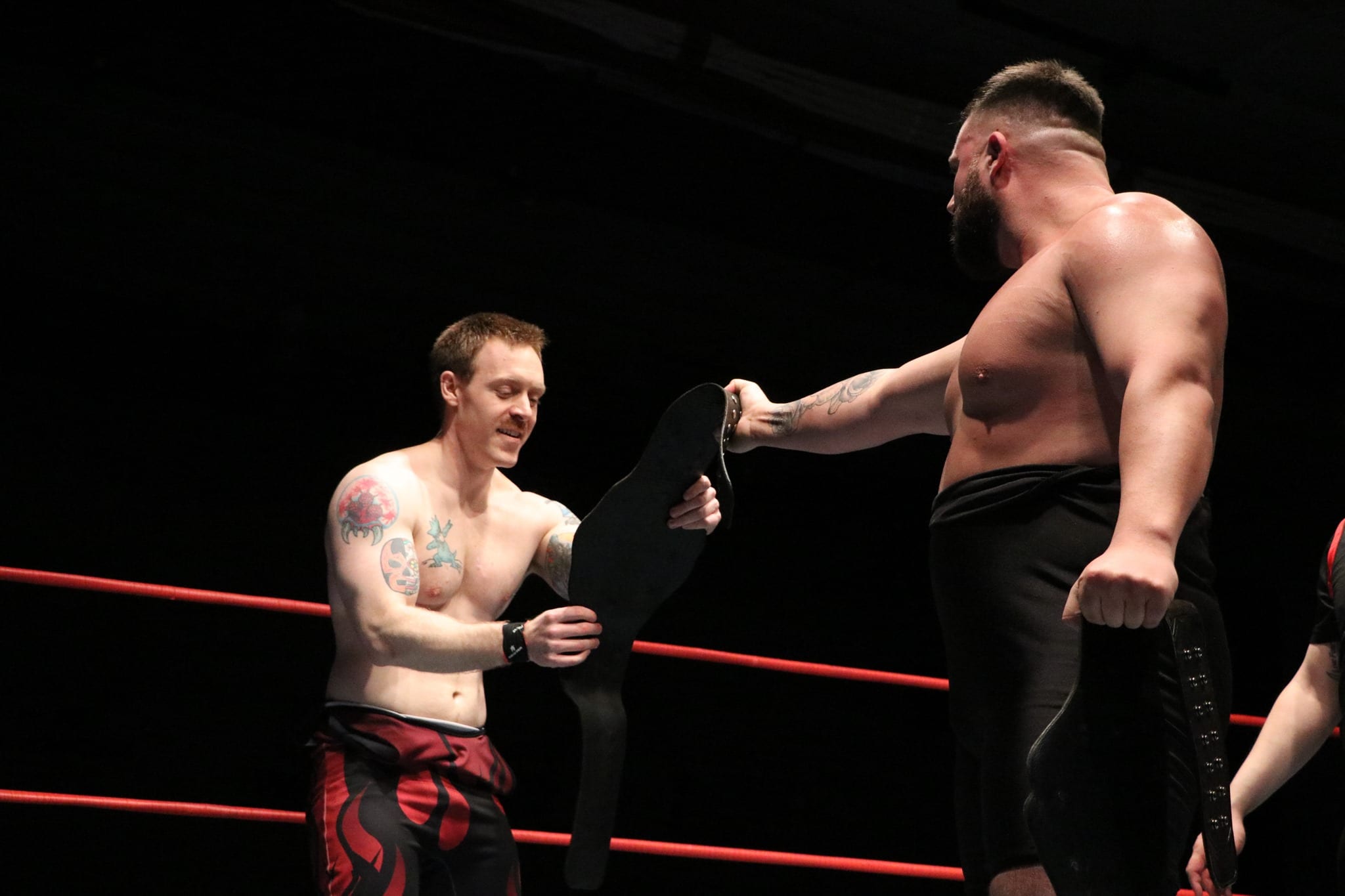 The Jimmy Vegas Announcement
Jimmy Vegas was introduced to the ring to reveal his “major announcement”, but when his music hit, it was The Lebanon Don who made his way to the ring.  The Don proclaimed that he was tired of Vegas humiliating him and offered him a wad of cash to come out and “fight” him.  Vegas accepted the challenge, but it was a trap!  Several of The Lebanon Don’s hired guns jumped Vegas from behind, but Vegas ultimately disposed of them all!  Vegas called for the ring to be cleaned up of the bodies, and promised to be back at then end of the night to make his announcement! 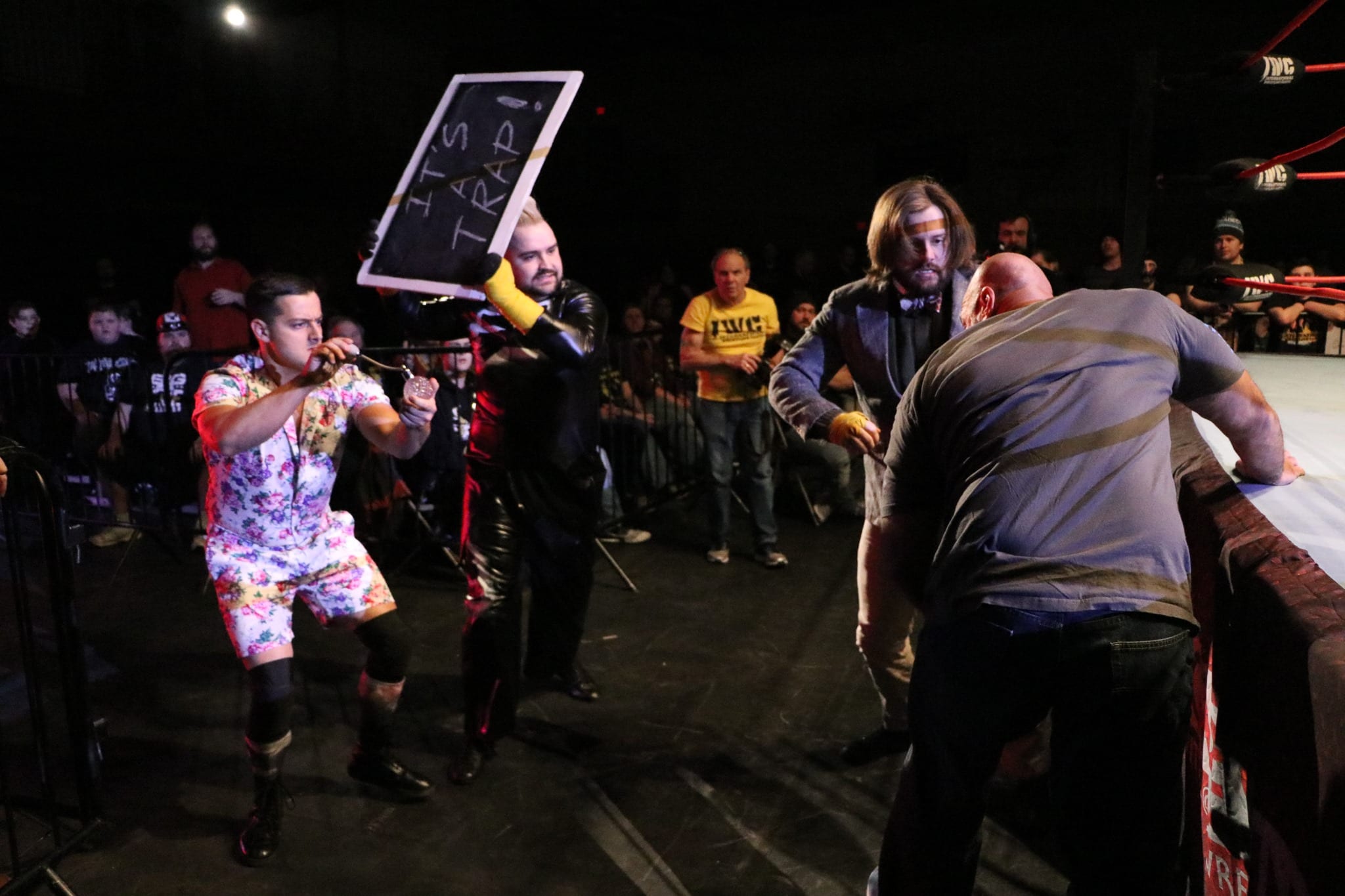 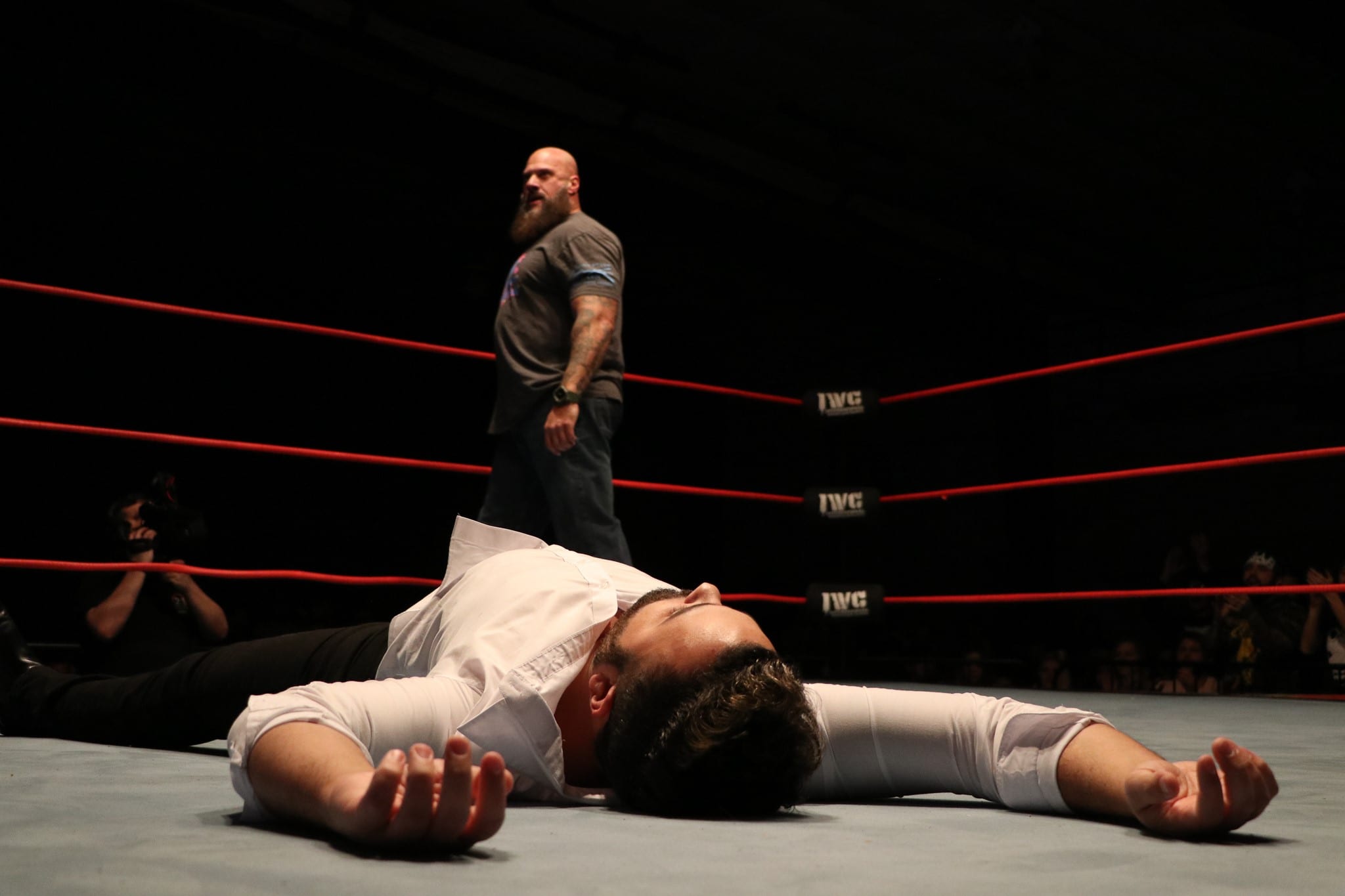 John McChesney defeated Spencer Slade
In a battle of IWC legend vs. rookie, Spencer Slade was able to keep up with McChesney for the majority of the match.  When he finally looked like he was gaining the advantage, Zach Nystrom got involved, and McChesney used an air horn spike Slade’s hearing aide and steal the victory.  However, this would just be the beginning of their interaction for the night! 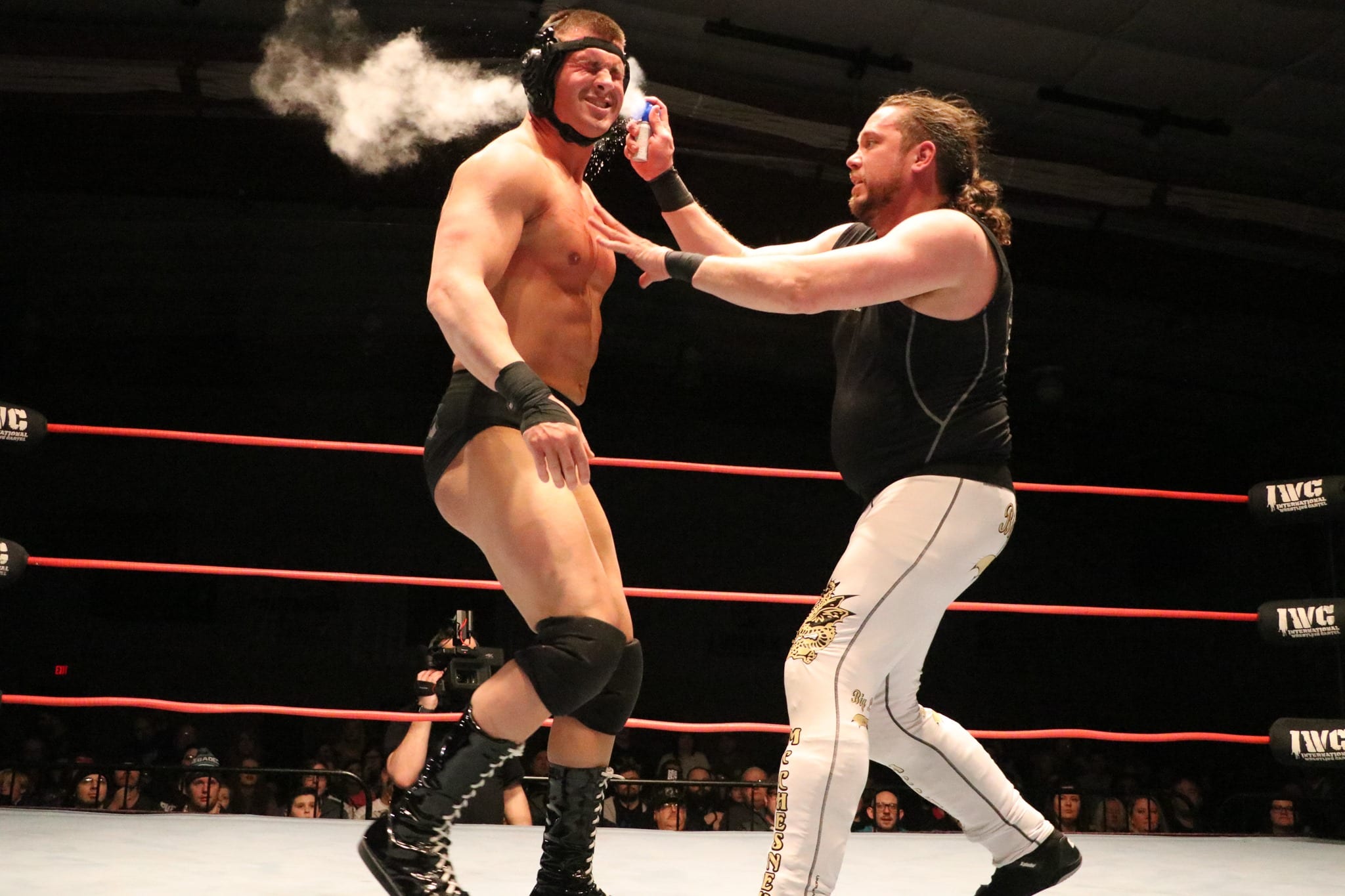 Mambo Italiano defeated Hardcore Hooven with Special Ref “The Franchise” Shane Douglas to become new IWC High Stakes Champion
Per the High Stakes Championship rules, defending champ Hardcore Hooven got to choose the match stipulation.  Hooven went back to his Philly roots, and appointed ECW Legend, “The Franchise” Shane Douglas, as special guest referee.  Douglas immediately upped the ante by then making the match “ETREME RULES”!  With the odds stacked in his favor, Hooven was dealt a bad hand when the edge of a steel chair caught his head, several lacerating him in the process.  Hooven fought hard, but the blood loss slowly took it’s toll on the champ.  In the end, Mambo Italiano shocked everyone in attendance by pulling out the victory and becoming the new IWC High Stakes Champion! 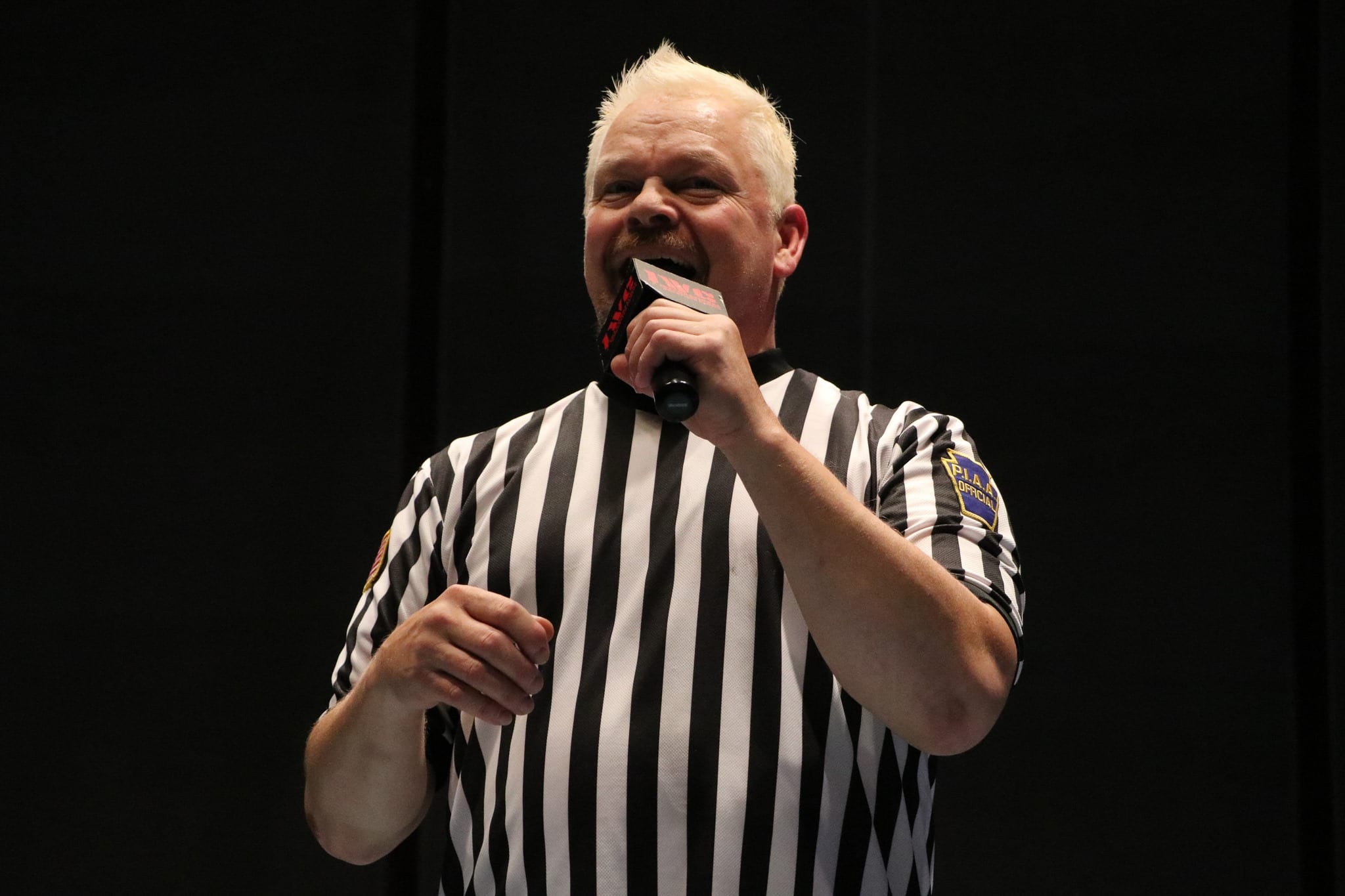 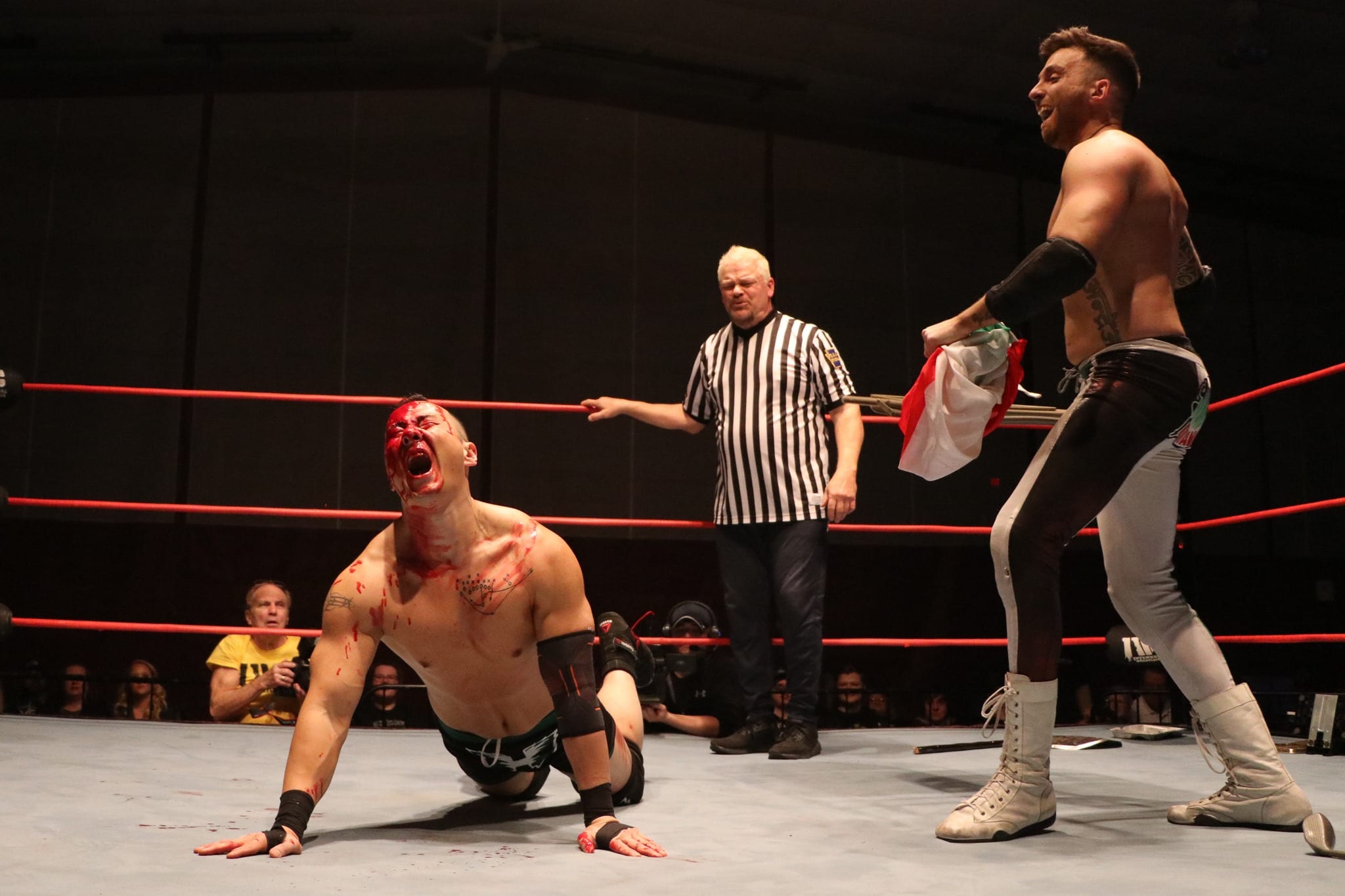 Immediately following the match, the roof was blown off of the Court Time Sports Center when fans witness the long awaited return of “The Eccentric Athlete” RC Dupree!  RC made it clear that he had his eyes on recapturing the IWC High Stakes Championship, and the match was set for March 14th!

Jeff Cobb defeated JaXon Argos
Two former Super Indy Tournament competitors on two very different paths collided in this match.  Jeff Cobb, fresh off of his AEW on TNT debut, came into this match with momentum.  Meanwhile, JaXon Argos has been struggling to keep it together since losing the IWC World Heavyweight Championship in December.  This was JaXon’s chance to get back on track, and for over 15 minutes he hung strong with Cobb.  However, in the end “The Hawaiian Juggernaut” proved to be too much for the former champ, and pulled out the victory.  Where will a down and dejected JaXon Argos go from here?  Early signs show that he may be trying to travel down a familiar path to get back to success…

Johnny Patch defeated Shawn Phoenix, Anthony Young, and Jami Jameson to retain the IWC Super Indy Championship
This match pitted four of the hungriest young talents in IWC against each other for one of the biggest prizes in Independent Wrestling.  All four men gave EVERYTHING they had, and while Patch kept the gold, all competitors left this match as bigger stars and with more respect than they had coming in.  However, following the match, Atticus Cogar sent a reminder that he can “RESET THE SYETEM” whenever her wants, and he teased his power by having his Culmination take out the Super Indy Champ!

“Big Time” Bill Collier defeated Andrew Palace
At our last event, the Reset Button selected Bill Collier to Team with Palace and Spencer Slade to take on Team Big League.  However, Palace was suspicious of everyone after all of the back stabbing that happened on there night that the new Team Big League formed.  After a mis-timed knock-out punch from Collier to Palace, Team Big League got the win, and Palace was sure that Collier did it intentionally and was with Team Big League.  Since they were not able to get on the same page, they decided to settle it in the ring!  These two men took each other to the limit before Collier narrowly won the fall.  However, the real drama came after the match when Team Big League approached the ring to congratulate Collier and offer him a spot in their alliance.  It appeared that Collier would accept, but the crowd went wild when he ultimately denied John McChesney’s offer.  Team Big League quickly attacked Collier, but Spencer Slade and Andrew Palace ultimately made the save, showing that they now may be all on the same page… and the three of them being on the same page may be the only way to stop Team Bug League!

Queen Aminata defeated Katie Arquette
We were all excited to see two of the top women in independent wrestling compete one-on-one for the first time, but that quickly changed when Queen Aminata brought Justin LaBar to the ring with her.  It was immediately revealed that taking Katie’s title wasn’t enough, but LaBar had brought in Aminata to end Katie once and for all.  While this didn’t happen, LaBar still Queen Aminata steal the victory, and the Queen appeared to have joined Team LaBar.  However, after the match, Katie Arquette announced that she would be evening the odds as she will be bringing in Allie Kat to team with her and challenge Ray Lyn and Queen Aminata on March 14th!

Jack Pollock defeated  Brian Pillman, Jr. to retain the IWC World Heavyweight Championship
In our main event of the evening, Jack Pollock pinned Brian Pillman, Jr. to remain IWC Champion!  Pillman recently signed a full-time contract with IWC, and the contract included a guaranteed IWC World Heavyweight Championship match.  While Pillman had an incredible showing, he wasn’t able to take advantage of this contract clause, and came up just short.  Following the match, Jimmy Vegas came to the ring for his major announcement.  What happened next rocked the foundation of the IWC…

Remember, you can see this entire event at our Digital Video Store to check out this full event, or Subscribe to the IWC Network for the same price to have unlimited access to this event and all of our events back through 2011!

Tickets to our next event, IWC NINETEEN, are available here!  A full event preview is coming soon to IWCwrestling.com!