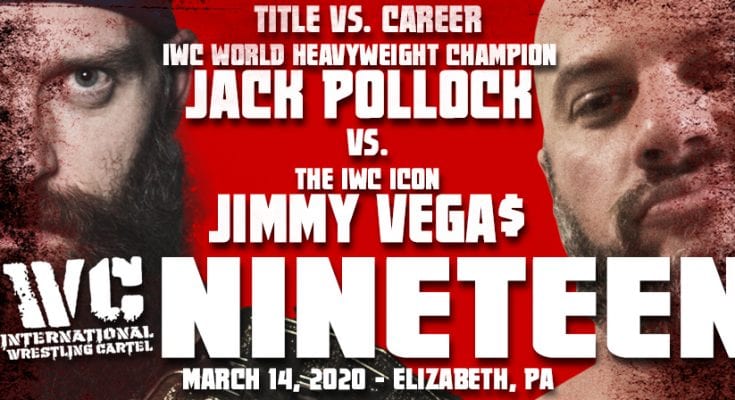 On March 14th, IWC Wrestling presents “NINETEEN”, a historic 19 year anniversary celebration event!  Doors open at 6:00, and the first match will begin shortly after 6:30!  Make sure you get the best seats by pre-ordering tickets HERE!  If you cannot be there in person, you can watch online via iPPV, or save money with an IWC Network subscription to watch LIVE on IWCwrestling.com!  The card is stacked with IWC Stars, current stars from across the country, and several stars returning from IWC’s past!  It doesn’t get any bigger than this at The Court Time Sports Center! 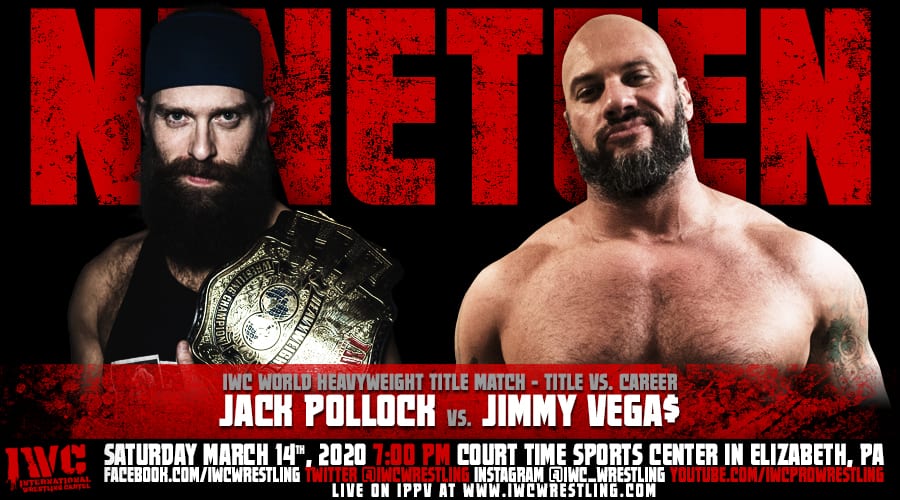 Our main event is one of the biggest matches in IWC history when Jack Pollock puts his title on the line vs. Jimmy Vegas’s 20 year career.  After successfully defending his IWC World Heavyweight Championship against Brian Pillman, Jr., Jack Pollock had little time to celebrate as Jimmy Vegas made his way to the ring for his major announcement.  After running through his accomplishments and accolades, Vegas announced that it was finally time to step away from the sport that he loves after a 20 year run.  But before Pollock could congratulate him, Vegas surprised everyone by cracking Pollock’s head open and challenging his to this high stakes match!  Now, it will be Jack Pollock vs. Jimmy Vegas, Jack’s improbable title reign vs. Jimmy’s historic 20 year career on March 14th.  One will come to an end that night.  Either way, it’s going to be a night that goes down in IWC history. 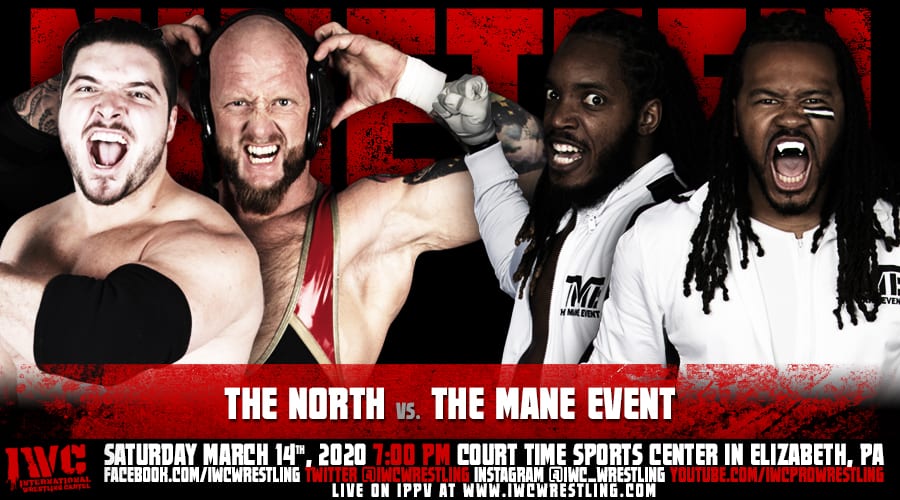 It was so good the first time that we have to give them a round two! The rematch of The North vs. The Mane Event is happening right here on March 14th! Two former IWC Tag Team Championship teams will collide, and the winner is almost sure to jump to the front of the line to be the title contenders! 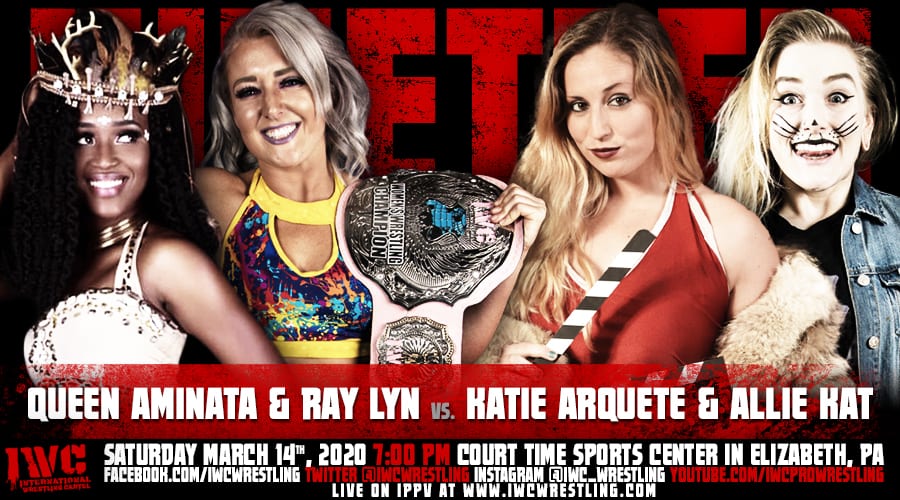 Justin LaBar threw another curve ball at Katie Arquette when he appeared in the corner of Queen Aminata at our last event.  LaBar made it clear that this was his attempt to rid the IWC of Katie once and for all, but although he helped Aminata get the victory, Katie was still left standing.  Now, in an attempt to even the odds, Katie has called on the services of Allie Kat to help even the score!  Don’t miss this all-star women’s tag team match! 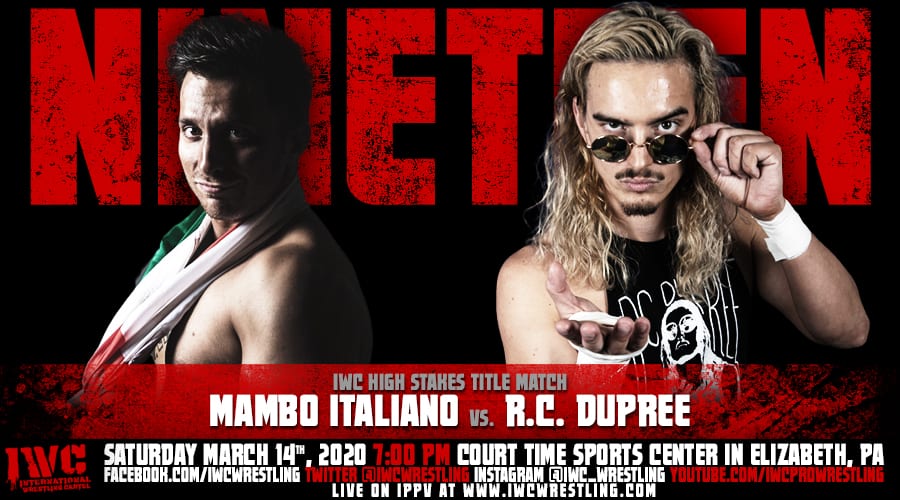 Mambo Italiano shocked everyone in attendance last month when he captured the IWC Highstakes Championship from Hardcore Hooven. However, his celebration was cut short by the highly-anticipated return of “The Eccentric Athlete” RC Dupree, who immediately made it known that he wanted to reclaim his title! Will Mambo Italiano prove that his win was no fluke, and that the time for dancing is over? Or will RC recapture the IWC Highstakes Championship in his first match back? 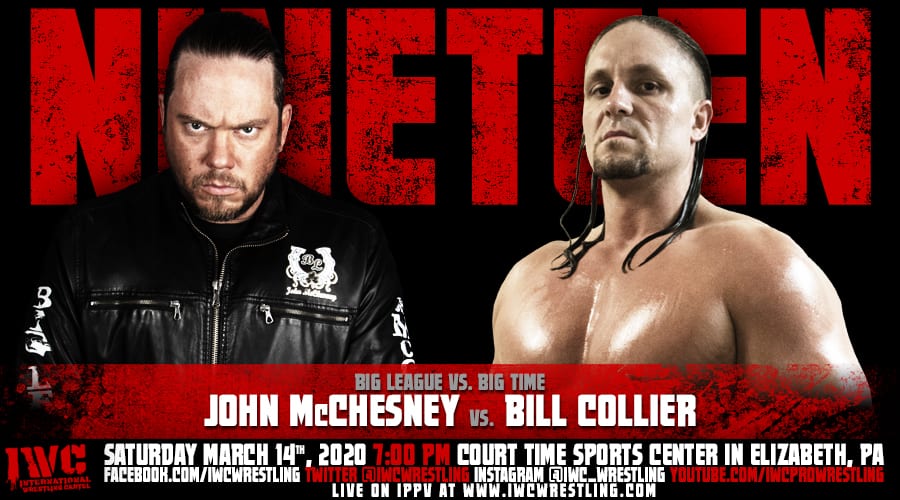 At our last event, John McChesney promised a new member of Team Big League, but when Bill Collier turned him down, battle lines were drawn in the sand! Now on March 14, McChesney will get a chance to avenge his embarrassment last month when he takes on Collier 1-on-1! This one has match of the year candidate written all over it! Who will come out on top in this battle of two of the best in the game today? What role will Team Big League play? What about Collier’s friends of Palace and Spencer? 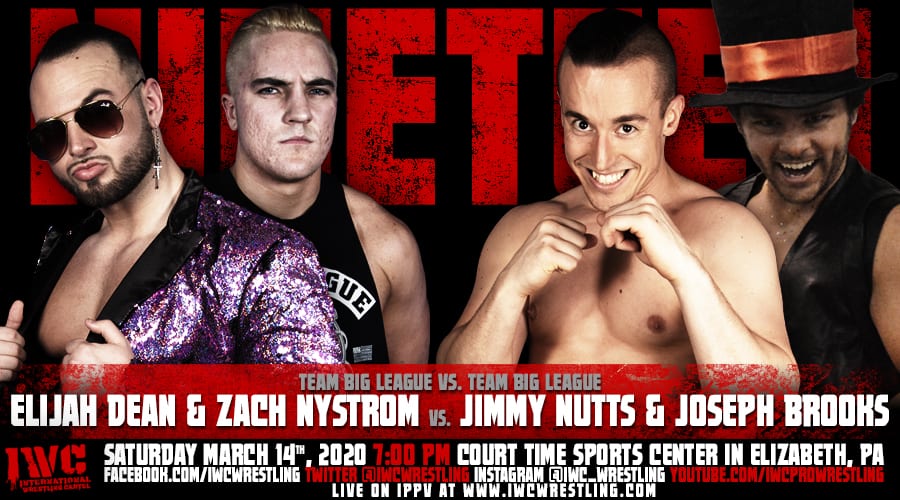 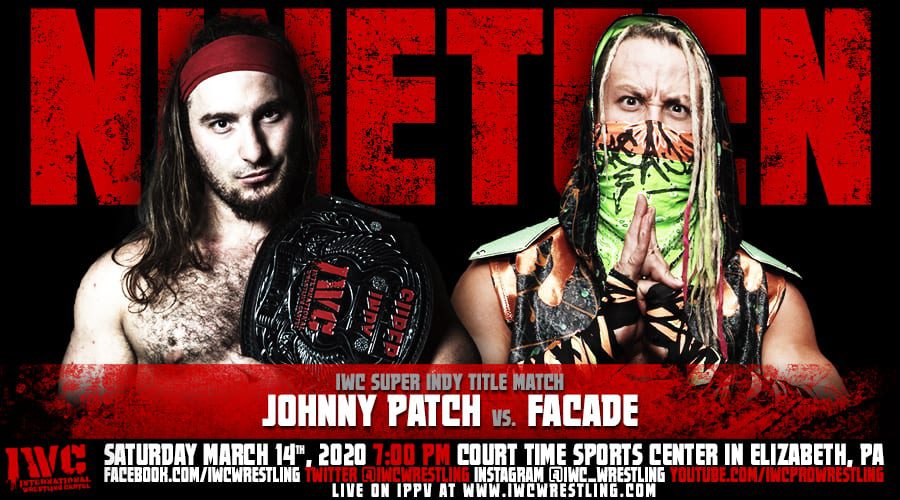 Super Indy Dream Match! One of the greatest Super Indy Champions of all time and former Super Indy Tournament winner, Facade, will return to IWC on March 14! There he will challenge IWC upstart and current Super Indy Champion, Johnny Patch, for a chance to reclaim the title and build upon his IWC legacy! Will The Neon Ninja rise back to the top? Or will The American Daredevil continue his improbable run as champ?! 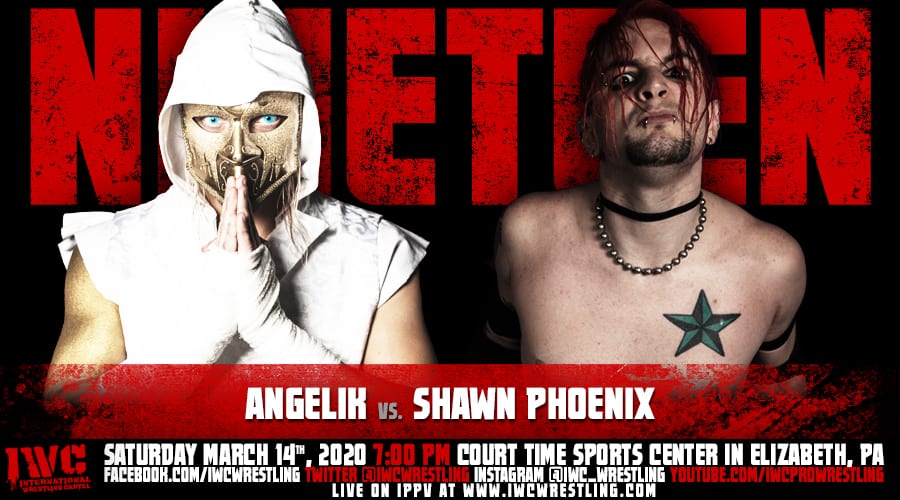 It all started 5 months ago when The Culmination left Gory in a bloody heap outside of the ring. Before they could finish the job, Shawn Phoenix made a shocking return and chased The Culmination off. But the damage was done. “Gory” was dead… and in his place emerged a man simply known as “Angelik”. He appears to have come to IWC to right the wrongs of Gory’s past. Over the past several months, Angelik has set his sites on Phoenix in an attempt to help him “embrace the light“. But why? Is it because he feels that Phoenix could have done more to stop the brutal attack by The Culmination months ago? Or is it something deeper? Nobody knows, but on March 14th we may get answers as these two men finally step in the ring one-on-one after months of altercations. Will Phoenix finally “embrace the light”? Or will the mystery of Angelik finally be solved? 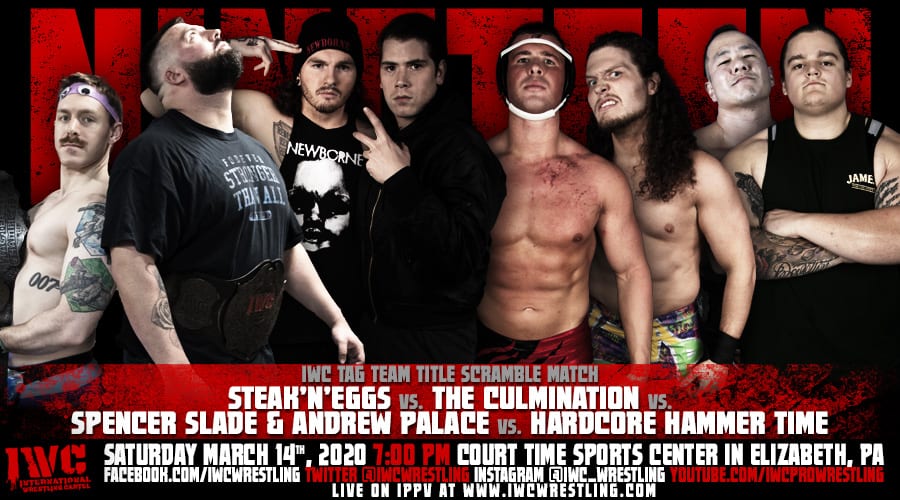 Last month, Bulk Nasty challenged all-comers, but his partner Zander Gabriel took that challenge a bit too literally and asked for all challengers AT ONCE! So, in honor of past IWC tradition, we came up with some of the best challengers that we could for a good old fashioned IWC Tag Team Championship Scramble:

Andrew Palace and Spencer Slade – After a few months of tension, their mutual distain for John McChesney and Team Big League has finally seemed to put these two on the same page. This match will put their relationship to the ultimate test to see if they can work together to defeat the undefeated team of Steak and Eggs, and capture tag gold before their Team Big League counterparts!

The Culmination – The Culmination has quickly climbed to the top of IWC so far in 2020, and they have now earned themselves a shot at the tag team titles. With the power of the Reset Button on their side, will it come in to play in any way during or after this match?!

Hardcore Hammer Time – You heard right! Two of the latest fan favorites with momentum on their sides and a chip on their shoulders will be paired up for a shot at tag team gold. These men know what it means to get hardcore, but will it be enough to end the undefeated streak of Steak and Eggs?!

We expect a large crowd, so come early and be ready to have a great time as we celebrate 19 years of IWC! Tickets will be available at the door, but are also available online HERE!  And remember, if you cannot be there in person, you can watch online via iPPV, or save money with an IWC Network subscription to watch LIVE on IWCwrestling.com!