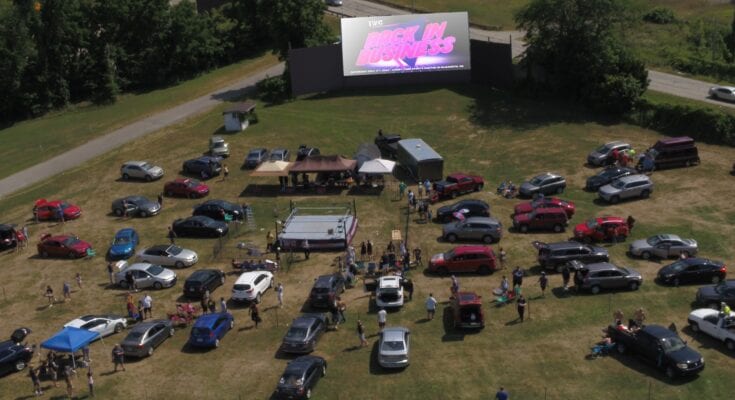 IWC made history on July 18th, 2020 at the Brownsville Drive-In by hosting the first professional wrestling event since the retune of sanctioned sports in the state of Pennsylvania!  Additional safety guidelines were in effect to ensure a safe environment for all athletes and fans.  Social distancing guidelines resulted in a very unique, drive-in style atmosphere that made for a very memorable experience!

The day started off with the first professional wrestling match in four months in the state of Pennsylvania as Andrew Palace battled Bill Collier!  This was a rematch from a match of the year candidate earlier in the year, and had major IWC World Heavyweight Title ranking implications.  Bill Collier won the first outing earlier this year, but after a back and forth contest, Andrew Palace evened the score with a pinfall victory!  Both competitors shook hands after the match as the fans cheered the return of pro wrestling!

The next match was also expected to help determine the next challenger for the IWC World Heavyweight championship as Jack Pollock went to battle with Jock Samson.  At our last event in March, Jock Samson and The Regulators attacked Jack Pollock before his title loss to Jimmy Vegas, so Pollock was not only trying to earn his rematch, but he also had revenge on his mind.  As usually,  Jock did not come to the ring alone and had all Regulators by his side on a mission to shut IWC Wrestling back down once and for all.  When it appeared Pollock was going to be able to overcome the entire group, a new member of The Regulators appeared out of nowhere (later to be revealed as Officer Dan’s cousin, Deputy Don).  The Deputy snuck a can of beer into the hands of Jock, and The self proclaimed G.O.A.T. used the can to knock out Pollock and steal the pin.

After months of trash talk, Jami Jameson and Dan Hooven finally got a chance to step into the ring with Team Big League (Elijah Dean and Zach Nystrom w/ The Dime Piece).  Hooven and Jami looked to have the upper hand until The Dime Piece slipped a roll of Dimes to the Man Dime (pun intended?).  Dime used the roll of dimes to knock Hooven unconscious, then it was just a matter of time before the due finished off Jameson to continue their undefeated streak as a tag team in IWC.

Spencer Slade has been one of the most promising rookies since his debut in IWC, but in the early part of the year he was wrapped up in drama with Team Big League.  On this day, he was distraction free as he took on another newcomer, Thicc Vic Braun.  Braun could match Spencer’s size and strength, but in the end Spencer’s technical prowess proved to be too much as Braun was forced to submit to an ankle lock!

Our next match featured the world traveled Sam Adonis teaming up with a wrestler on the complete opposite end of the spectrum – the debuting rookie “Greek God” Alexander Apollo.  These men were set to face The Culmination in the form of Remy Levay and Otis Cogar.  The Culmination tried to take advantage of Apollo’s inexperience, but in the end Apollo was able to work with the experienced Adonis to get the pinball victory for his team!

Our next match was scheduled to be Mambo Italiano vs. “The Lebanon Don” Joey Moses, but The Don had other plans.  As he approached the ring, fans quickly realized that IWC newcomer, Tito Oric, was accompanying The Don to the ring.  The Lebanon Don has used his money to buy victories in the past, but this day would be different.  The Don reveal that Oric was his hired mercenary, and his first hit job was to defeat the increasingly popular Mambo Italiano.  In an impressive showing, Tito Oric defeated Mambo via TKO.  Following the match, Joey Moses arrogantly ripped up a crisp $100 bill and sprinkled the remains on the fallen body of Mambo.  With money and power, what does this new alliance have in store for the rest of the IWC roster?

The women’s champion was in the house at IWC Back in Business, but she had two angry athletes on the prowl looking for revenge for past misdeed.  Ray Lyn found a partner in the rookie, Ella Shae, to take on Queen Aminata and Katie Arquette.  “The Queens” were looking ready to get revenge and dethrone Ray Lyn, but outside help from Calvin Couture and Chase Gold ultimately proved to be too much.  Ray Lyn got the pinfall on Aminata, and the IWC Women’s Champ avoided vengeance for a little while longer!

The Regulators returned as Chris LeRusso stepped into the ring with “The Sexy Fireman” Jason Tyler.  Tyler was unable to keep up with the run vet, and LeRusso ultimately scored the pin, but that wasn’t enough.  The Regulators were looking to make an example of The Sexy Fireman and began to attack him after the match in an attempt to continue their quest to shut down IWC.  Before they could finish the job, Jack Pollock returned and cleared the ring of The Regulators and proceeded to revive The Sexy Fireman with Pollock’s signature beer bash!

The unlikely rookie Tag Team of M.O.R.A.L. had the opportunity of a lifetime as they got to challenge Steak and Eggs for the IWC Tag Team Titles in their very first match!  As unusual and unlikely as this rookie tag team appeared to be, their dissimilarities couldn’t match that of the uncanny Steak and Eggs.  M.O.R.A.L. looked to use their common bond of past demons as motivation to score the upset of the day, but the unexplainable friendship of Bulk Nasty and Zander Gabriel once again proved to be too much.  Steak and Eggs retained their titles and advanced to an undefeated record of 8-0 in IWC Tag Team competition!

In the main event of the day, Johnny Patch defended his Super Indy Championship vs. the holder of the Reset Button, Atticus Cogar, and “A1” Anthony young in a dangerous TLC match!  The first man to score a pinfall or submission would leave the drive-in with the historic Super Indy Championship, and Tables, Ladders, and Chairs were ALL legal!  All three men took each other to the limit in this hardcore brawl.  In the end, Patch appeared to be taken out of the equation when Otis Cogar interfered and powerbomed him off of the ring apron and through a table to the ground.  However, Patch was able to recover in time to dispose of Atticus and hit A1 with his signature shooting star press for the pinfall victory!  Following the match Atticus signaled that he was about ton activate the Reset Button, which would have given him another title shot right on the spot, but it turned out to just be more head games from the Silver Toothed Satan!  Patch celebrated to end a historic and memorable event, but he will continue to have to look over his shoulder for Atticus as we move forward.

You can watch IWC Back in Business in its entirety right now with a subscription to THE IWC Network or purchase the event individually here: IWC VOD. 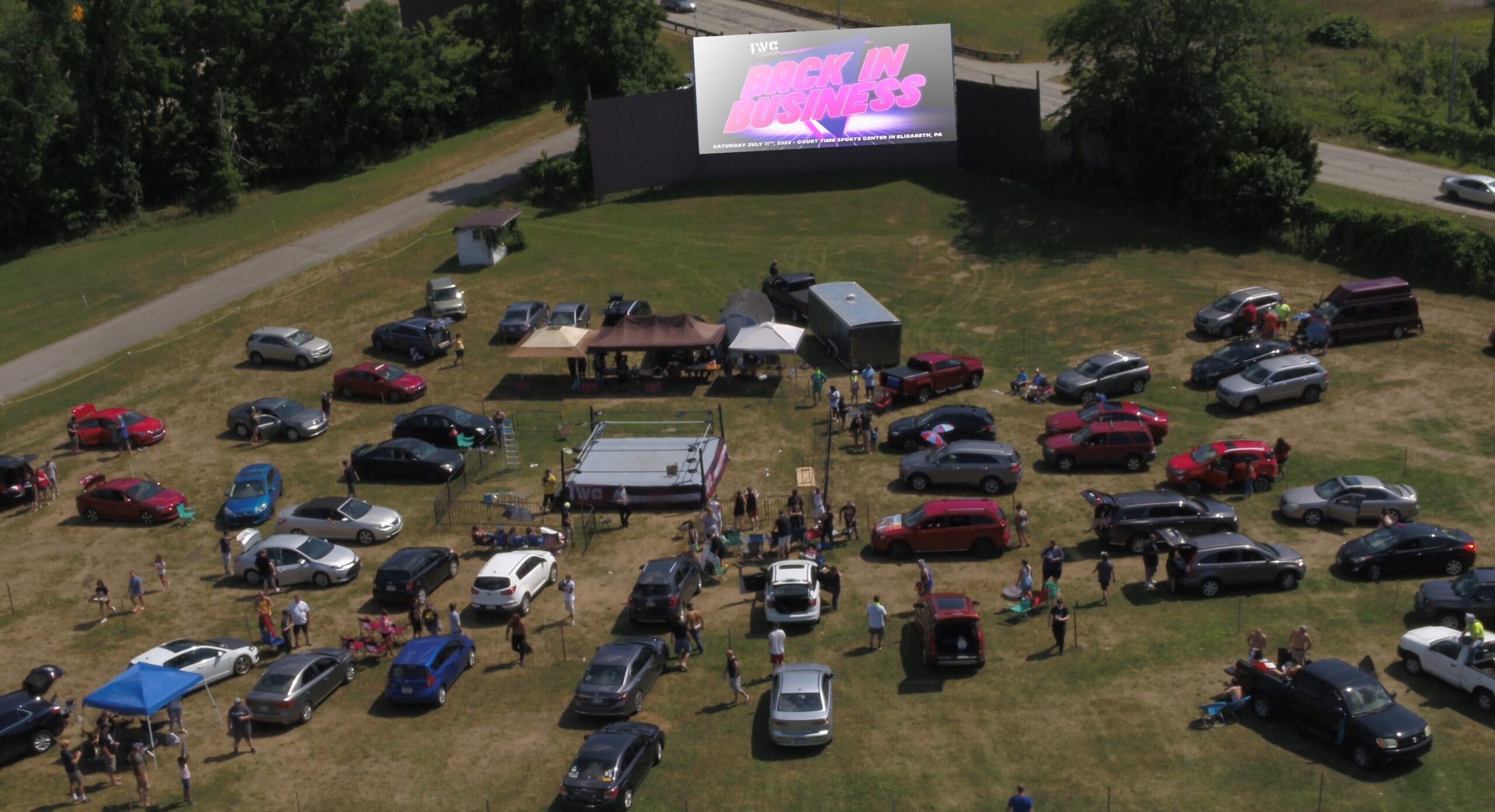 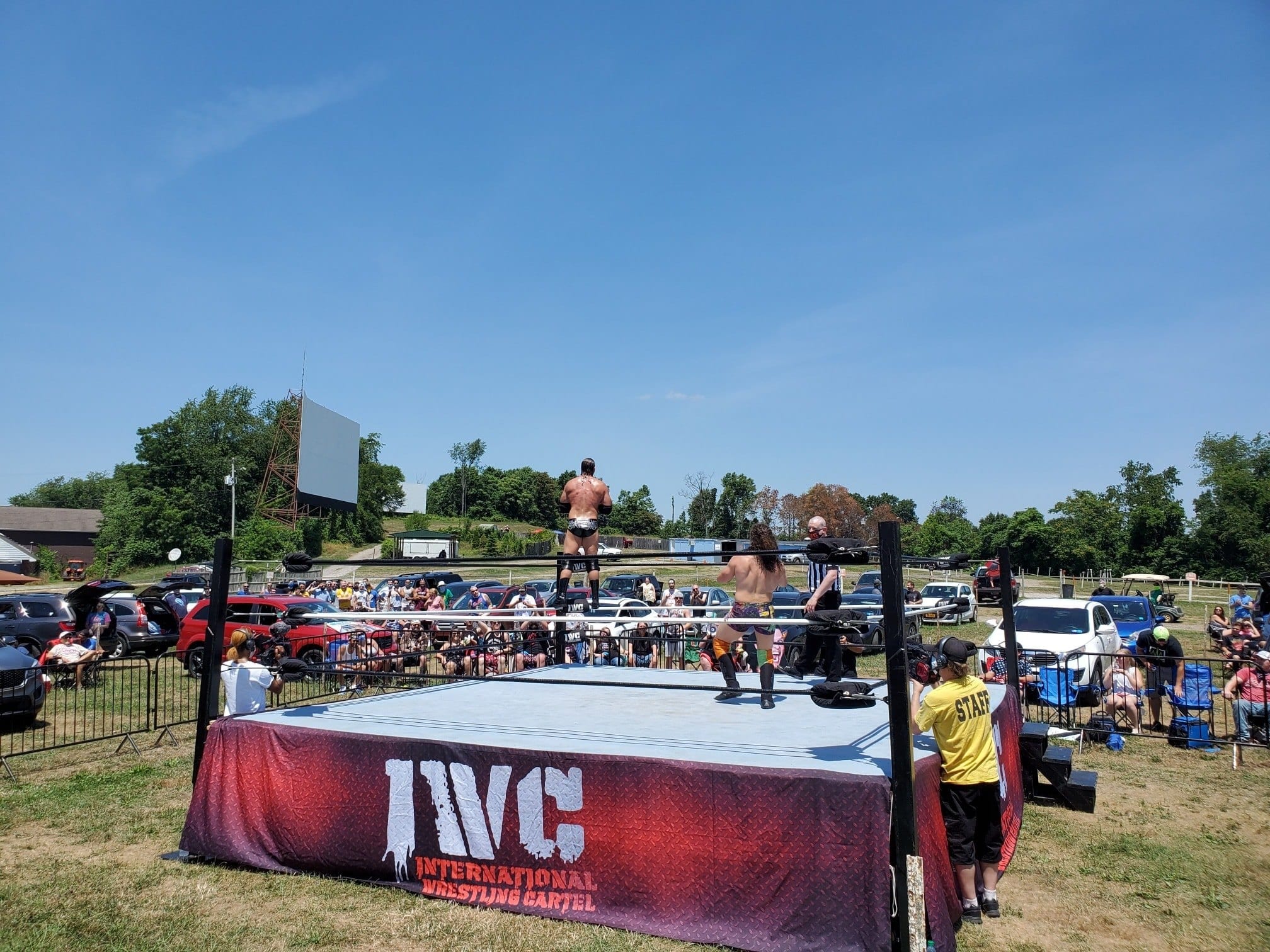 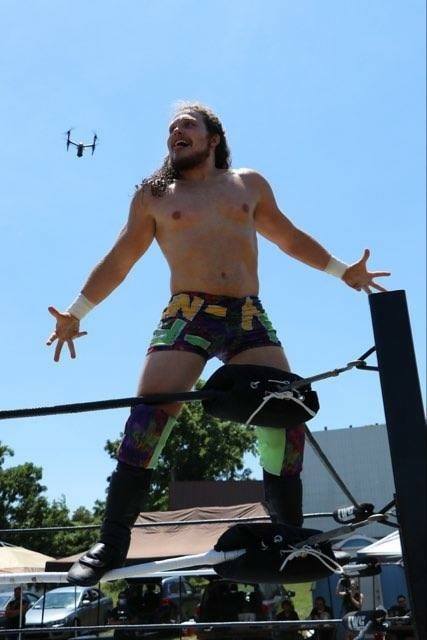 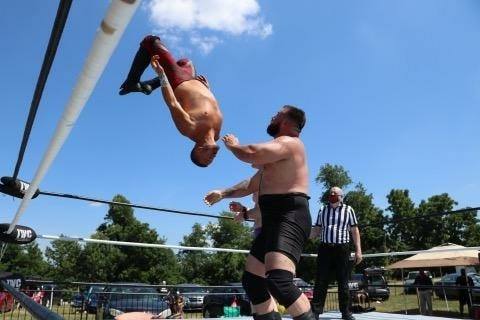 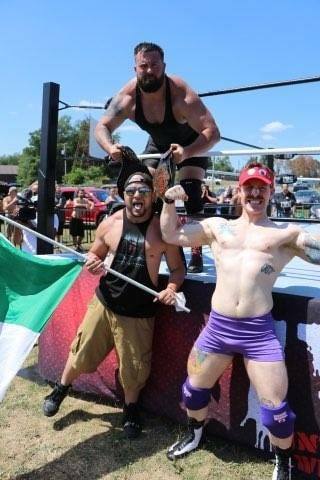 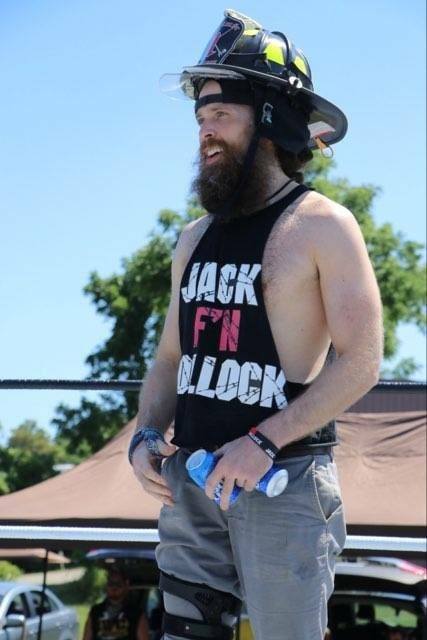 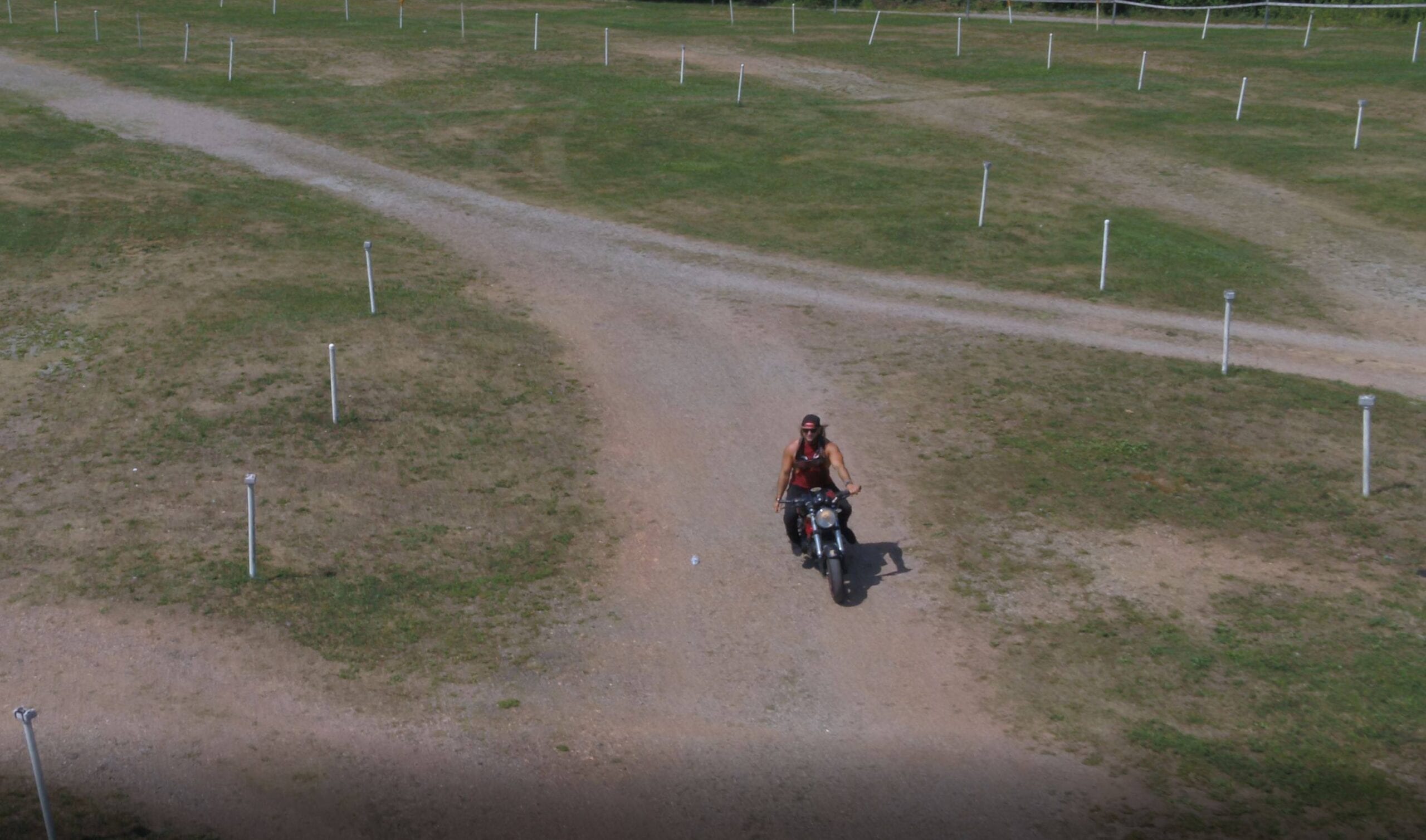