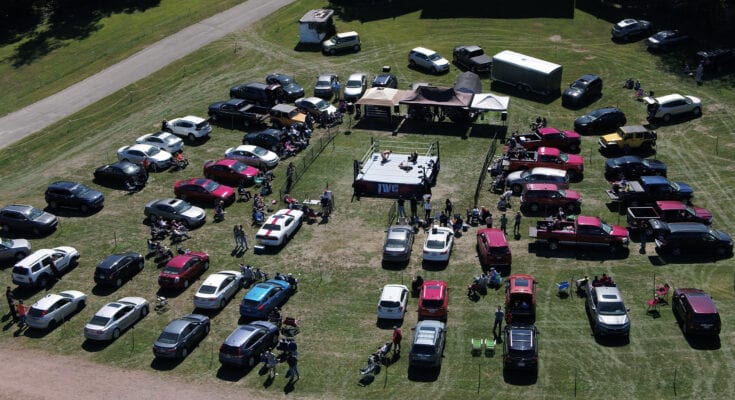 IWC Feature Presentation Results:
IWC stars and fans alike were aware that this could be IWC’s last event ever. While this event was going on, Jock Samson was on his way to Harrisburg to hand the IWC Title over to the governor and shut down IWC for good! Just before the show started, IWC owner Justin Plummer offered Jock a chance to win ownership of IWC if he would just turn around and not hand over the IWC Title. Would he accept?
1. Jack Pollock and Jason Tyler defeated The Regulators (Officer Dan and David Lawless).
2. Johnny Patch defeated Spencer Slade. After the match, Spencer hit Patch with a low blow and left him lying in the ring.
3. The Lebanon Don and Tito Oric defeated the STDs (Chest Flexor and Corey Futuristic). During the match, Oric lived up to his “Bosnian Bonebreaker” nickname by breaking the wrist of Futuristic and putting him out of action for several months.
4. Anthony Young won the fatal four-way match by pinning Phil Archer. Angelik and Thicc Vic Braun were also included in the match.
5. RC Dupree successfully defended the IWC High Stakes Championship by defeating Chase Gold in an Easel Match!
6. TME defeated M.O.R.A.L.
7. Bill Collier defeated Cole Karter in a match that was MUCH more competitive than experts predicted.
8. Team Big League (Man Dime and Zac Nystrom) defeated Steak and Eggs (Bulk Nasty and Zander Gabriel to win the IWC Tag Team Championships and remain the only undefeated tag team in IWC!
9. Chris LeRusso defeated Alexander Apollo. After the match, The Regulators attacked Apollo until Pollock, Collier, and Jason Tyler made the save! Justin Plummer announced that Jock Samson agreed not to shut down IWC in return for a chance to win ownership of the company. On 10/10 it will truly be winner takes all when The Regulators battle Team IWC in an elimination tag team match for ownership of IWC!!!
10. Hardcore Hammer Time defeated The Gambino Brothers in a tables match when Hardcore Hooven speared Marshall off of the ring apron and through a flaming table!
Tickets for IWC Winner Takes All on 10/10 at Washington Wildthings Stadium are on sale now at IWCwrestling.com!