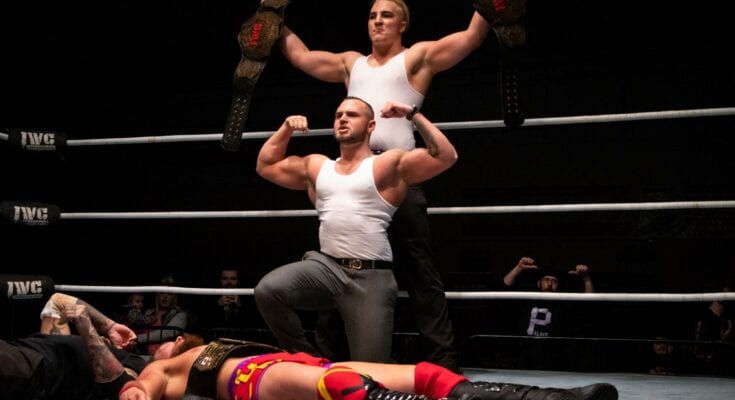 1. Anthony Young w/ The Dime Piece pinned Jayce Karr w/ Dani Grey. After the match Team Big League announced that 2021 will be the year IWC gets a makeover, and that by the end of the night they would make a statement.
2. The Culmination (Otis Cogar & Remy Lavey) defeated The Mane Event (Duke Davis & Ganon Jones, Jr.) in one of the biggest upsets in recent time; however they relied on the use of a foreign object for the win.
3. Cole Karter defeated Spencer Slade and Alexander Apollo in a triple threat match with a quick pin on Slade after he was caught celebrating prematurely.
4. Money Shot (“The ManDime” Elijah Dean & Zach Nystrom of Team Big League) defeated Fire Safety (Shawn Phoenix & Jason Tyler) to retain the IWC Tag Team Championships
5. Bulk Nasty defeated Jock Samson after Jock retreated and took an intentional count out. After the match, Bulk Nasty demanded Jock come out so he could finish his beating, but instead he was answered by Deputy Don Murphy. Deputy Don Murphy may not have survived.
6. Katie Arquette, Sam Adonis, and Hardcore Hammer Time (Hardcore Hooven & Jami Jameson) defeated The Regulators (Chris LeRusso, Officer Dan Murphy, & “The Gavel” David Lawless, Esq.) and Ella Shae when Jami Jamison and Hardcore Hooven hit Hammerstein to score the pinfall for their team.
7. Bill Collier defeated Brian Pillman, Jr. to become the new IWC Super Indy Champion in an early 2021 MOTY candidate!
8. Lebanon Don & Tito Oric defeated Miles Monroe in a handicap match for The Don to retain his IWC High Stakes Championship. Per the title’s rules, The Lebanon Don was allowed to pick the stipulation for the match.
9. Andrew Palace defeated Angelik to retain the IWC World Heavyweight Championship. After the match, Team Big League attacked Palace in an effort to show that they are coming for his title. But then the Reset Button was activated…
10. Andrew Palace defeated Atticus Cogar to retain the IWC World Heavyweight Championship. The Culmination approached the ring as the Reset Button went off. For a moment, they were face-to-face with Team Big League, everyone ready for a fight. But Team Big League stepped aside and left the ring, allowing The Culmination to continue the attack on Palace. Just then, The Mane Event returned to get revenge on The Culmination from earlier in the night. TME, Remy, and Otis brawled to the back, leaving Atticus alone with a battered Palace. Just when it looked like Atticus Cogar had an easy pin in the bag, the referee was pulled from the ring at the count of 2 by Elijah Dean. Dean swept into the ring and laid out Atticus with The Man Dime Makeover, allowing Palace to instinctively roll on top of Cogar for the pin.
2021 is off to a hot start, and the battle lines are drawn with many of IWC’s top stars and faction vying for ALL of the gold! Team Big League, Andrew Palace, The Culmination, and TME ALL have unfinished business with each other, and we can’t wait to see how it all plays out in the months to come!