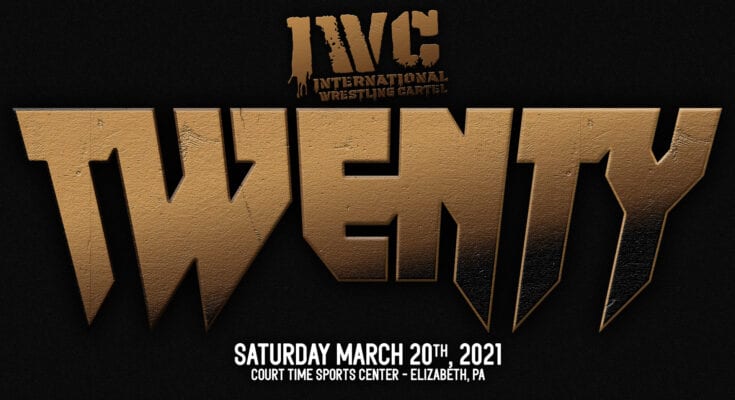 IWC celebrates TWENTY YEARS of pro wrestling on March 20th! Join us to celebrate this historic event at Marx’s Court Time Sports Center with TICKETS, or watch from the comfort of your living room LIVE on The IWC Network or iPPV!  This special night will feature all of IWC’s top stars, but we will also be joined by many of the faces who helped build IWC to Pennsylvania’s premiere professional wrestling promotion since 2001!  While many of these competitors are announced below, be ready for even more surprises that night from familiar faces from IWC’s past!  We PROMISE a special and emotional night.


After a completely chaotic finish to our 2021 Kick-Off event last month, “The Man Dime” Elijah Dean was left standing over a battered and beaten Andrew Palace, holding Palace’s title high in the air to add insult to injury.  This was enough to push Palace to request IWC management to make a title match on March 20th so that he could get his revenge on The Man Dime.  Will Palace get the vengeance he is after, or did Elijah Dean lure Palace right where he wants him to become “Double Champ” Dime?
Last month, “Big Time” Bill Collier defeated Brian Pillman, Jr. to win the first championship of his IWC career by becoming the new Super Indy Champion.  After the event, Collier was quick to lay out a challenge to any of the best wrestlers, inside or out of IWC.  Shortly after, that challenge was answered by Impact Wrestling star, “The Walking Weapon” Josh Alexander.  Josh is no stranger to IWC gold as he is a former IWC Tag Team Champion, multiple time Super Indy Champion (including a steel cya match win over Wardlow), and Super Indy Tournament winner. Now he is back to take back the title that he believes is his!  Will Collier prove that he deserves to be in the Big Time? Or will Josh Alexander reign as IWC Super Indy Champion once again? This will be an absolute war that you can ONLY see in IWC!!! 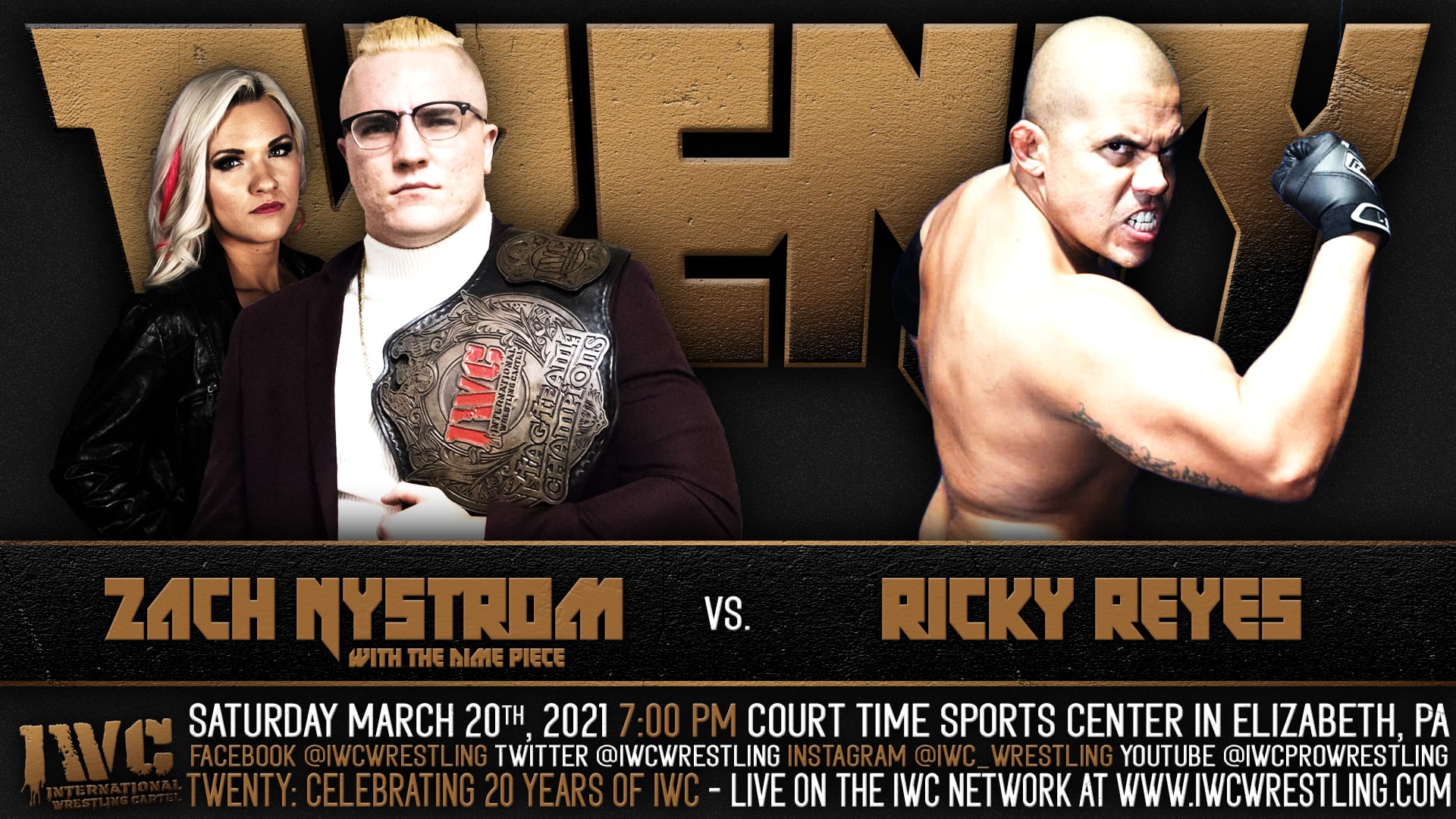 While The Man Dime will have his hands full with Andrew Palace, Team Big League’s Zach Nystrom will have a huge opportunity of his own! Nystrom is one of the fastest rising stars in IWC, but he will face his toughest challenge at IWC TWENTY when he faces former IWC World Heavyweight Champion and Lucha Underground star, Rickey Reyes!  Reyes has been preparing for his IWC return for quite some time, and he wants nothing more than to kick down the doors with big win over one half of the tag champs.  But Nystrom has a lot to prove, and a win over Reyes could be exactly what he needs to make his mark and elevate his career to the next level. This match could steal the show when one of the the best of IWC’s past meets one of the brightest of IWC’s future! 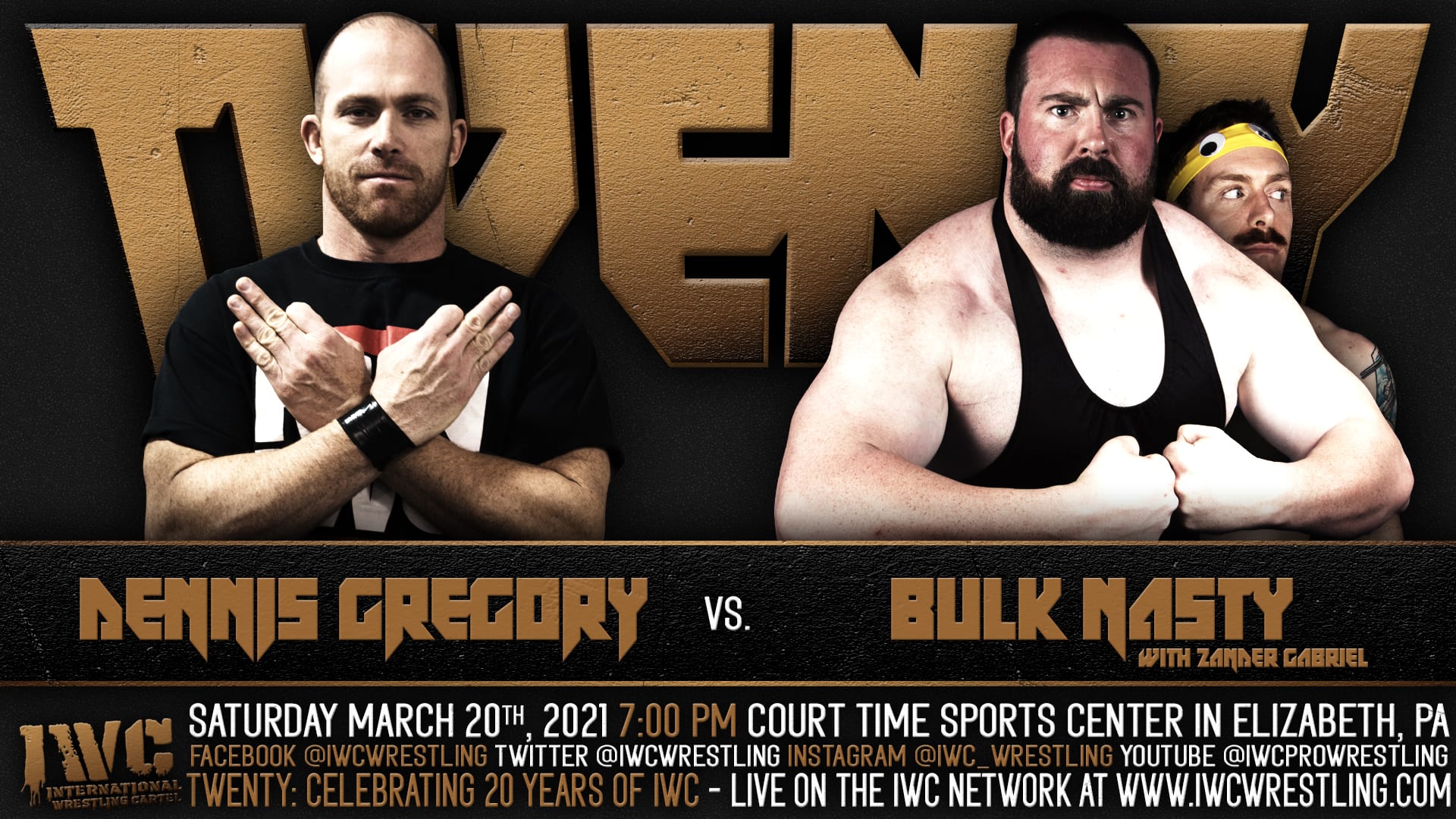 Two words: Bulk. Nasty. This man may be the on the biggest hot streak of any rising star in WIC’s twenty year history with many comparing his current dominance and win streak to that of Wardlow years ago.  But Bulk believe’s he is even better than that, and he is on a quest to prove that he deserves a shot at the IWC World Heavyweight Championship. In his quest, Bulk has been challenging and defeating past IWC Champions and legends for almost a year now.  But someone new has caught wind of what Bulk has been doing, and he’s back to protect his legacy as the most decorated champion in IWC history.  Dennis Gregory has been IWC World Heavyweight Champion more times than anyone else in IWC’s twenty years, and he is aware of Bulk’s growing reputation of defeating former champions.  Bulk thinks he is the best, and wants the gold to prove it.  However, you can’t climb your way to be one of the best in IWC history without beating one of the best in IWC history, and Gregory isn’t ready to let Bulk bypass his legacy.  Will Bulk Nasty continue his win streak over this IWC legend to prove once and for all that he is Championship material? Or will one of the Founding Fathers’ of IWC  stop Bulk dead in his tracks, and show that maybe he is deserving of a shot at a 6th Championship?!


Spencer Slade and Cole Karter have already proven that they have the potential to be the future of IWC, sooner rather than later.  But these two youngsters have some unfinished business after Karter scored a quick pinfall over Slade at our last event when Spencer got a little too cocky and let his guard down.  Spencer claims to be a submission specialist, and was furious that Cole got the victory and the attention in the way that he did.  Spencer demanded that Cole get back in the ring with him one more time to determine a definitive winner, and he wants it on his terms – a submission match.  Cole has accepted, and the match is set!  Will Cole Karter pick up back to back victories, or will Spencer Slade live up to his moniker and make Cole tap out?! 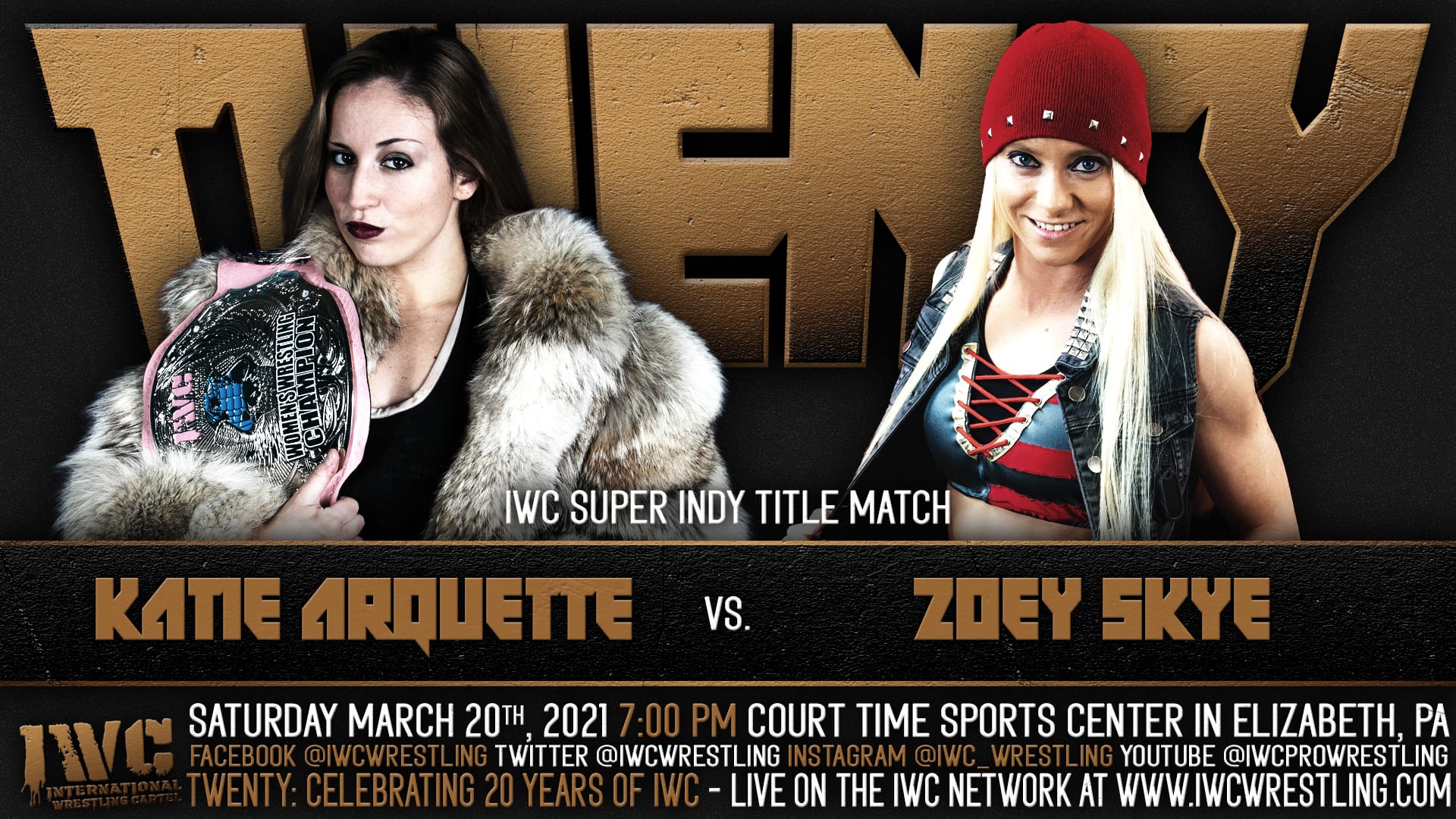 Katie Arquette will be defending her title on March 20 when Zoey Skye returns to IWC! Long before Katie was  “Queen of the Silver Screen”, Skye helped launch the IWC women’s division in 2015. She teamed with Britt Baker in IWC’s first ever women’s tag team match, but that was before the introduction of the IWC Women’s championship. Now Skye is back to prove that she deserves to be the champion of the division she helped create. But Katie is red hot on her third title reign, and she’s not looking to lose her crown any time soon. 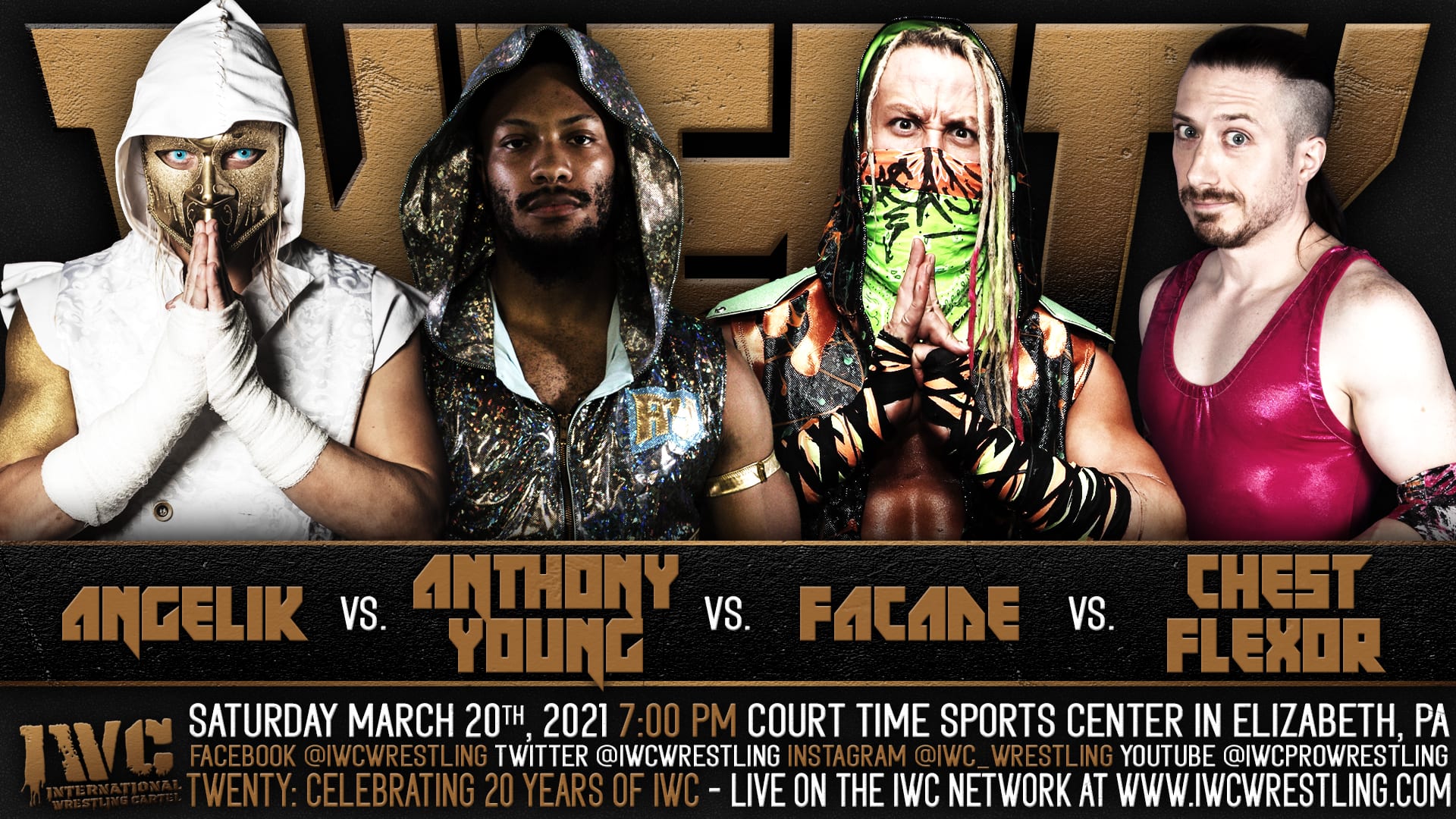 IWC TWENTY will feature a wildcard four-way scramble match consisting of a variety of the best stars from various eras of the company’s history. “The Neon Ninja” Facade, Chest Flexor, Angelik, and “The Super Indy Stallion” Young Tony will all compete to stand tall on this anniversary night.  But beware, this will be the first time that Facade and “Angelik” have ever encountered each other. How will that impact the match?  Will the past relationship between Gory and Facade shine through?  Or will Angelik force his former fiend to embrace the light?  Maybe Chest Flexor will shock the IWC universe with an upset worthy of his High Stakes past.  Or Young Tony will find a way to get a victory over these vets on his quest to climb the Super Indy ladder.  So many factors play into this one that we can’t wait to see how it plays out! 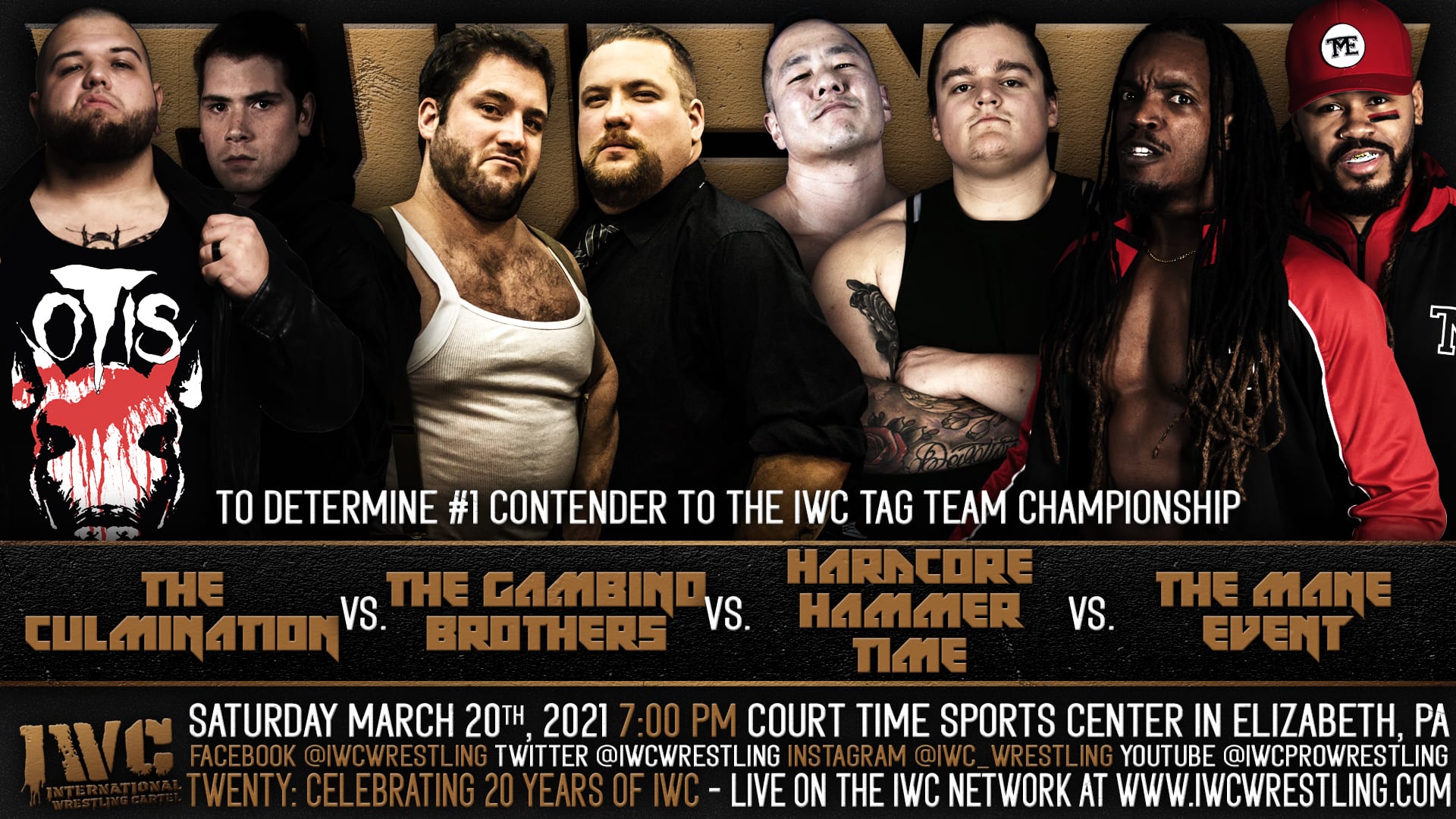 While the chaos that ended our last event resulted in the Palace vs. Dime main event title match, there was MUCH MUCH more to unpack, and plenty of other scores to be settled.  In particular, The Culmination and the Mane Event have some unfinished business.  At our last event, The Culmination used a foreign object to score an upset victory over TME.  As a result, TME helped to foil The Culminations Reset Button plans later in the night.  IWC management determined that these two teams should face off once again, but this time with the #1 contenders hip to the IWC Tag Team Championships on the line! However, management has listened to the fans, and heard you loud and clear.  So the red hot, fan favorite Hardcore Hammertime has been added to the match and will also get a shot at the #1 contender spot.  And since it’s the epic 20 year anniversary, we decided to invite one of the most decorated tag teams in IWC history back for a chance to add another title reign to their record number – The Gambinos!  Who will earn a future tag title shot vs. Money Shot when four of the best teams in IWC collide? 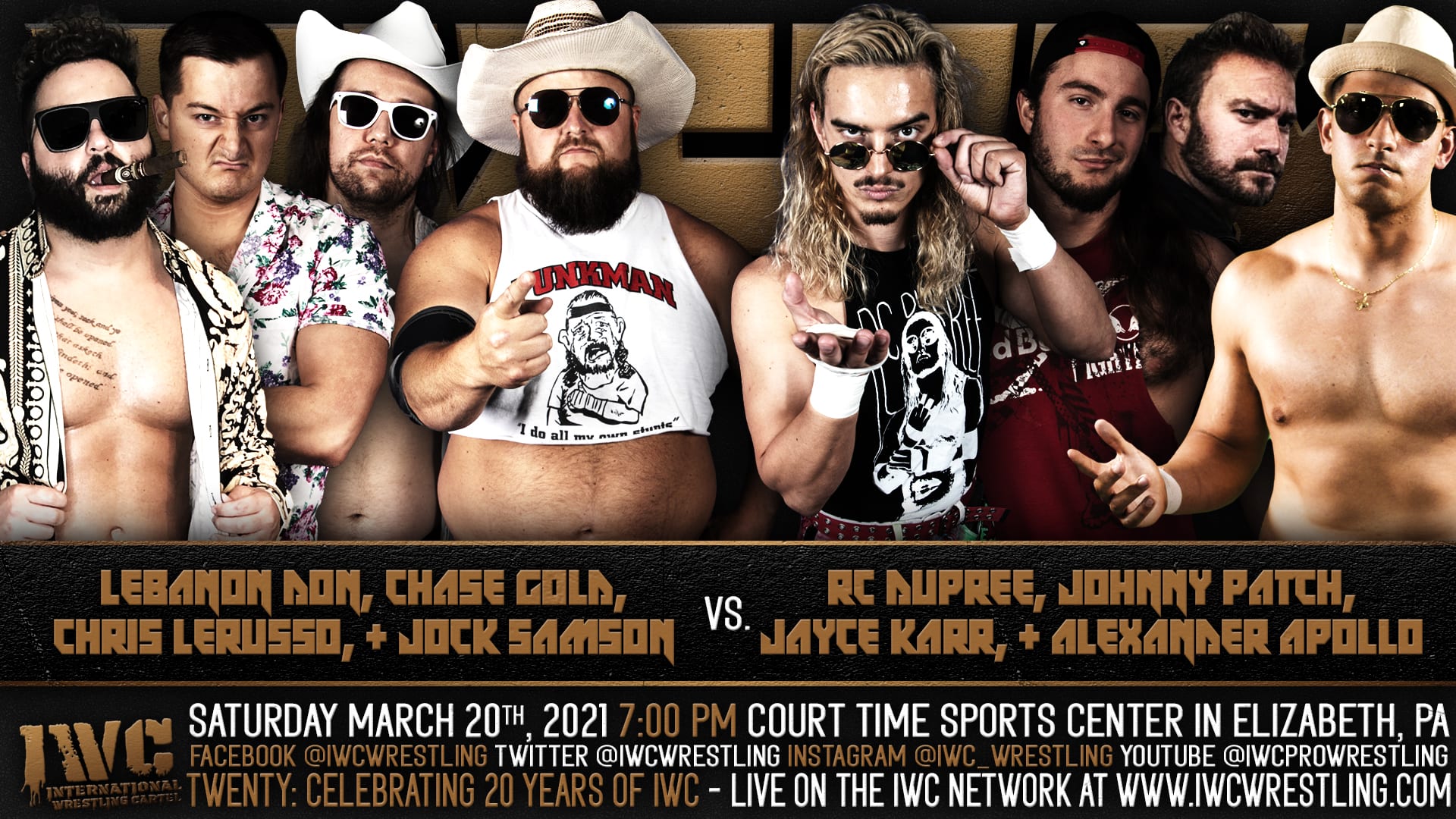 Finally, we have an IWC All-Star 8-man tag team match.  RC Dupree will get is back for revenge on Tito Oric and The Lebanon Don, The Regulators look to bounce back, Patch & Karr finally get to debut together, “The Greek God” in action, and… CHASE GOOOOOOLD! 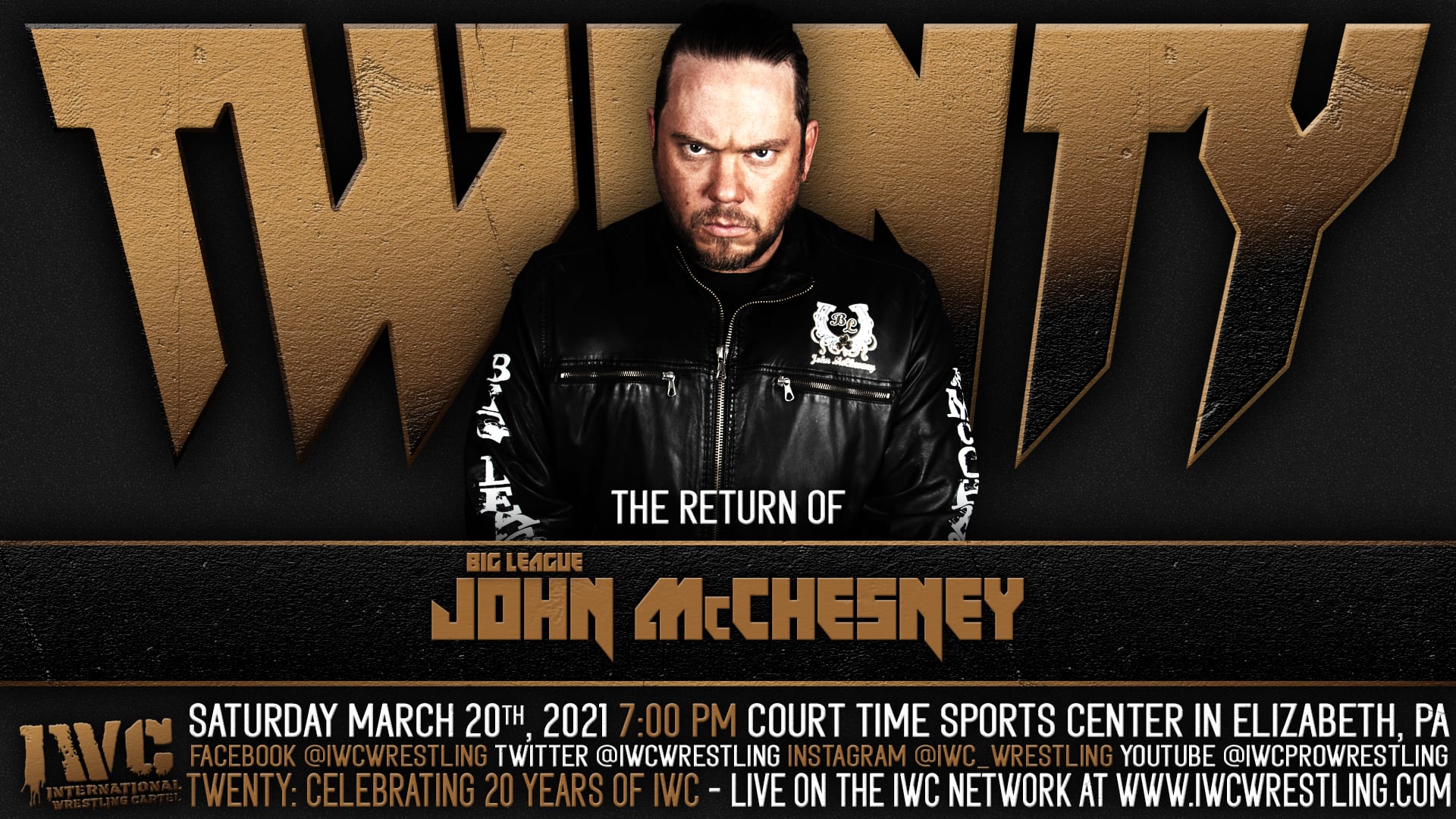 IWC promises some memorable and emotional returns from the personalities that helped build the company into what it is today.  While many of those faces will remain a surprise, we have been informed that IWC legend and the leader of Team Bug League, John McChesney, will return after a one year absence to rally his troops on a night where they all have important matches.  How will the return of their leader impact the matches for all members of Team Big League?  With so much controversy already caused by the faction, how much crazier will it gets when their leader rejoins them?  Find out LIVE on March 20th with TICKETS,   iPPV,    or an IWC Network subscription!  It doesn’t matter how you watch, but we promise you will not want to miss!!!