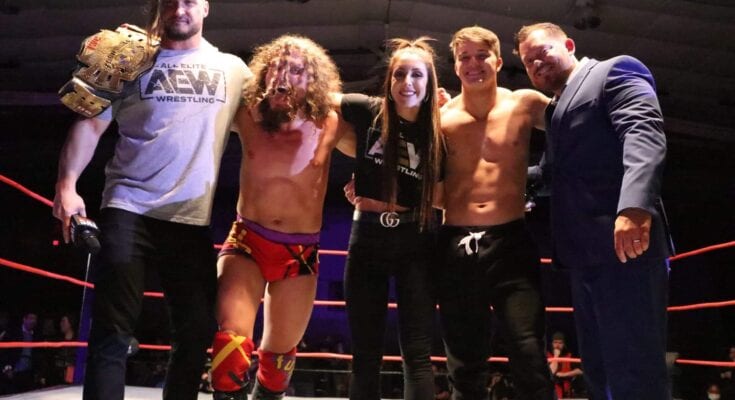 IWC TWENTY Results
1. Wardlow and Britt Baker made surprise returns to kick off this historic anniversary event. They discussed the importance of IWC to their own success, but also mentioned that they would be staying all night to scout the IWC roster and take one superstar back to Jacksonville with them to have a match on AEW Dark!
2. Young Tony won a 4-way match against Chest Flexor, Angelik, and Facade.
3. Following his victory, he was joined by the rest of Team Big League who introduced a returning John McChesney. An emotional return was ruined when Team Big League turned on their leader, and cut McChesney’s trademark pony tail.
4. Spencer Slade defeated Cole Karter in a submission match.
5. Jock Samson, Chris LeRusso, The Lebanon Don and Chase Gold defeated Johnny Patch, Jayce Karr, RC Dupree, and Alexander Apollo in an 8-man tag team match.
6. Zach Nystrom defeated former IWC Champion and MLW star, Rickey Reyes.
7. Bulk Nasty (w/ Zander Gabriel and Jimmy DeMarco) defeated former 5-time IWC Champion Dennis Gregory (w/ Jimmy Vegas).
8. DJ Z and Elias appeared on the big screen to thank IWC and our fans for providing them the start of their amazing careers in WWE!
9. The Culmination defeated The Gambino Brothers, Hardcore Hammer Time, and TME in a 4-way tag match to become #1 contenders to the IWC Tag Team Championships. After the match The Gambino Brothers assaulted Hardcore Hammertime due to frustration from their loss.
10. Katie Arquette defeated Zoey Skye to retain the IWC Women’s Championship.
11. “Big Time” Bill Collier defeated “The Walking Weapon” Josh Alexander to retain the IWC Super Indy Championship in an early match of the year candidate!
12. Andrew Palace defeated “The Man Dime” Elijah Dean to retain the IWC World Heavyweight Championship. After the match, Team Big League attacked Palace, but McChesney and Wardlow made the save and the night ended with three generations of IWC Champions standing tall in the ring. Until…
13. Britt Baker came to the ring to join Wardlow in announcing their selection for a match on AEW Dark. While they came to select one competitor, they actually chose three. Cole Karter and Spencer Slade were announced for future opportunities on AEW Dark. But first in line would be none other than IWC World Heavyweight Champion, Andrew Palace!
Thank you all for joining us to celebrate 20 years of IWC on a historic and emotional night! Relive this event, and gain access to our entire historic event library with an IWC Network subscription at IWCwrestling.com. Tickets for our next event on April 24th at the Brownsville Drive-In are available now at IWCwrestling.com!